Got a game of Talisman in last night at the club. I am slowly warping them all to my way of thinking. It was the revised 4th edition rather than the threadbare old 2nd edition copy which I cut my teeth on as I don't think that would last a whole game of sweating club members pawing at it. This was the third time I got a good Talisman session in since my retro epiphany last year. And, even the Wife likes it! 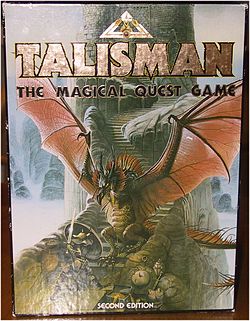 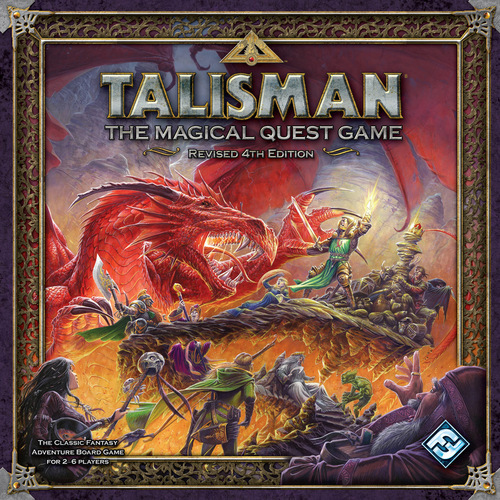 I think the game got an 'underwhelmed' review back in WD52, which goes to show the magazine wasn't always on the money in the old days because the longevity and popularity of Talisman can no longer be in doubt. It is easily my favourite board game of all time for starters, and I've played Diplomacy with the best.

In our game the Crown was seized by a power-drunk Fighter, crazed on craft and strength upgrades, who had survived a 'random' spell and numerous other attempts to derail his progress. He offed my poor Dwarf who had actually made it to the crown first while the Fighter 'Diced with Death', but it wasn't to be the little fella's night. The game should have been won by the Ghoul, but a prolonged sequence of shocking dice saw the scuttling grave-lurker shredded by a pack of hungry Pit-Fiends. Spare your sympathy for the Priest though, he spent the entire game being thrashed and whipped between two Goblins, being repeatedly defeated in combat and healing at the Chapel before going back for more. He never made more progress than that and eventually was forced to cast 'Destruction' on a Goblin to escape, only to be eaten by a Dragon.

Thanks for stopping by!
Posted by Warlord Paul at 08:40

Email ThisBlogThis!Share to TwitterShare to FacebookShare to Pinterest
Labels: Board Games, Talisman