12 questions from the Octopi Lord. Q1.

Sometimes a blog questionnaire or challenge goes round that you just can't resist. Have a look at the original premise and maybe have a go yourself. As stated, the questions are very system neutral but fit particularly well with old school RPGs and wargames. I am going to have a crack at the questions one at a time which will hopefully give me a chance to elaborate on them and indulge in the occasional nostalgic journey.

Q1. What is my favourite villain I have ever challenged players with?

This has to be the Riddling Reaver, no doubt about it. Way back when, in 1990 if memory serves, a group of friends and I got together to do some no-frills RPG'ing. The Fighting Fantasy system was expanding beyond gamebooks at that time and was perfect for our needs so after a couple of simple dungeon crawls to get into the swing of things I (as GM) decided to unleash a proper FF adventure on them. 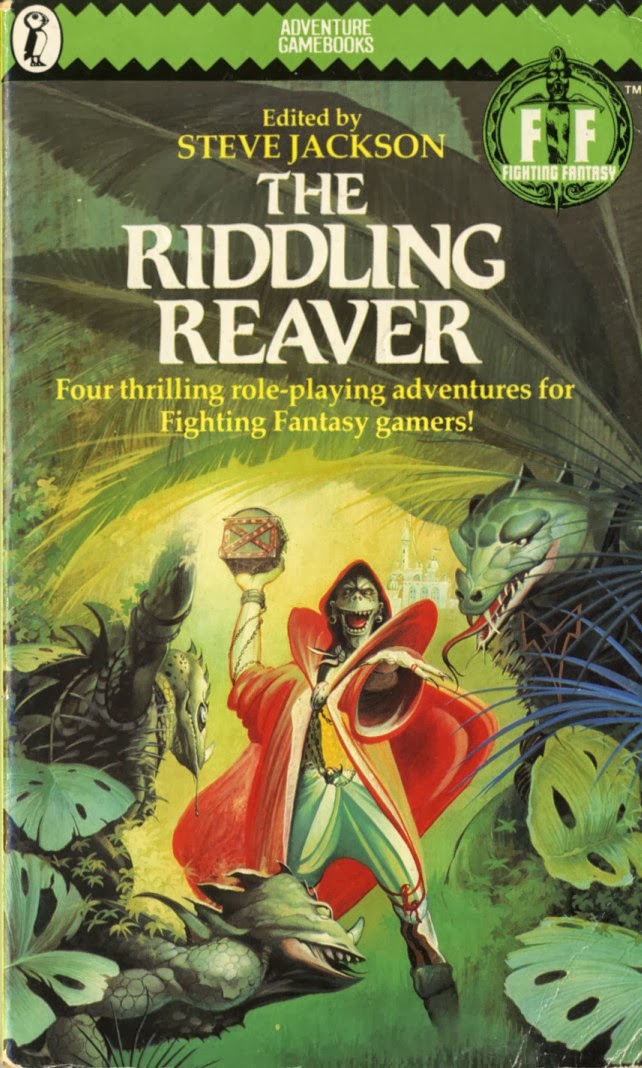 Despite being a tailor-made adventure that required little effort on our parts the eponymous protagonist took on a life of his own as I found myself using the spare grey cells to improvise some extra bedevilment for the adventurers to contend with. The Reaver is already a total butthole, written to be both a challenge and an annoying frustration to the players, but once you get into character with him and start to bring him alive he can really get under the PCs skin.

Before FF and the RR came along I had previously only run WHFRP adventures with all the grim perils and hidden threats I associate with that system. RR taught me to run a different kind of villain entirely, one that not only enjoys his work enormously but who also goes some way to ruining things for the poor PCs by spoiling those little checkpoint moments along the path that let you know you're on the right track. You're not allowed the satisfaction of tracking him down, he defeats you and then tells you where to go to get defeated next.

I got four more years out of the Reaver as I wrote sequel after sequel, leading the players around by the nose before finally allowing them the satisfaction of killing him off. It was a sad necessity that saw the Reaver finally run out of steam really, we reached the end of our GCSEs and moved on. Some went to sixth form or college, some got an apprenticeship and others joined the armed forces. We all split up and lost contact pretty irrevocably, though I occasionally sit back and recall those days when that group of young men were all that stood between the Riddling Reaver and a vulnerable Titan!

Thanks for stopping by!
Posted by Warlord Paul at 02:57

Email ThisBlogThis!Share to TwitterShare to FacebookShare to Pinterest
Labels: About me, Fighting Fantasy