When shall we meet (sic) again? In thunder, lightning, or in rain? When the hurly-burly's done, When the battle's lost and won.

Aaaah, Bring Out Your Lead 2014. Good times. The title probably makes more sense for those who were there, so if you don't get it, why weren't you there? Hmm? Make sure you come next time!

It was wonderful to see the event grow so much in 12 short months. Thanks must go to everyone out there who make the scene what it is, a vibrant and exciting gathering of passionate gamers, painters and collectors, but especially to Orlygg, Gaj and the Ansells.

Let's look at a few photos then, not too many, just some you may not have already seen or those I need to illustrate a thought. 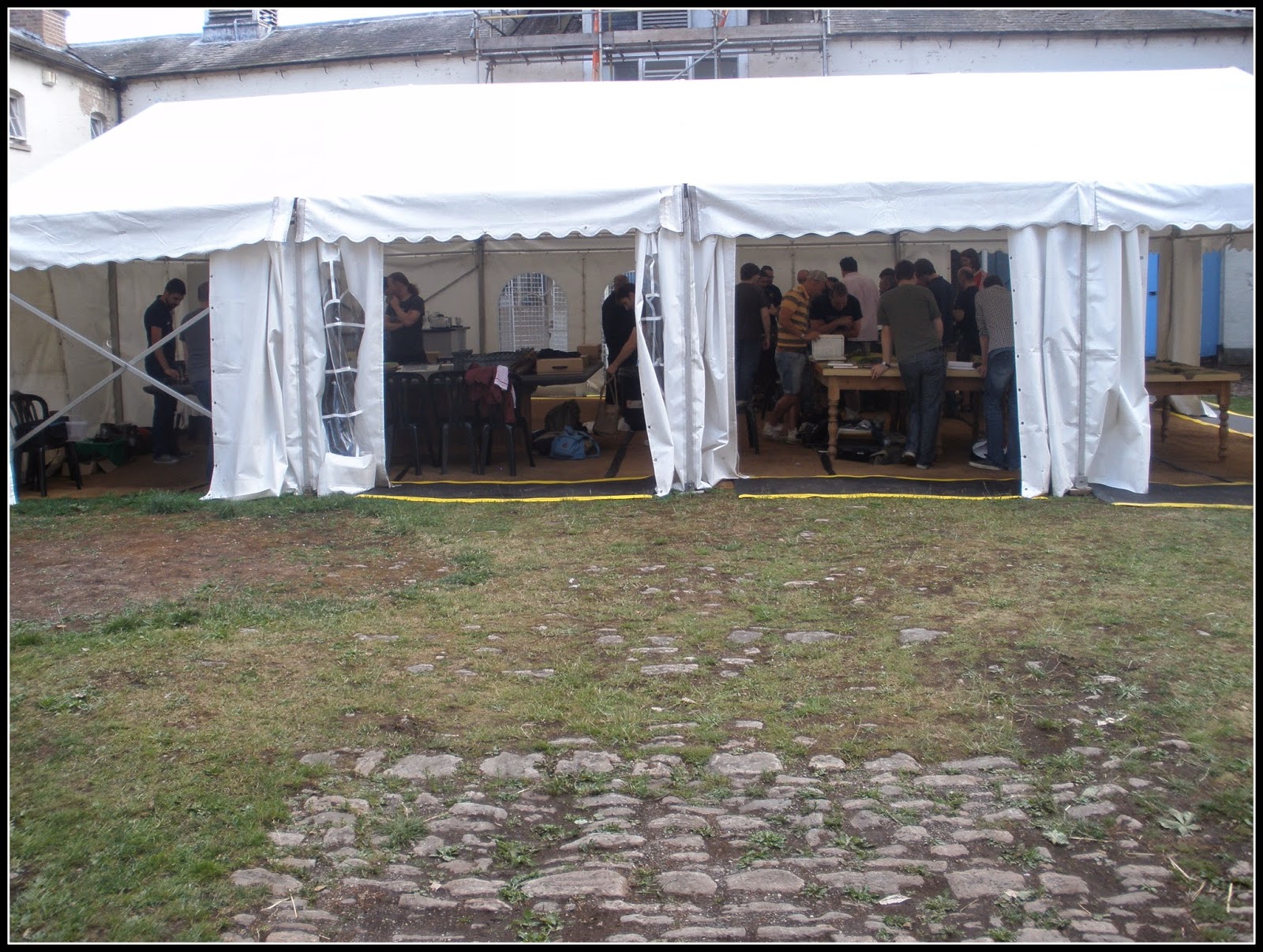 The Ansells set up a wonderful marquee for us complete with bar and display cooler. No doubt an acquisition for the Stoke Hall weddings side of the business. This gave us plenty of room to spread out and proved ideal in both hot and wet weather. 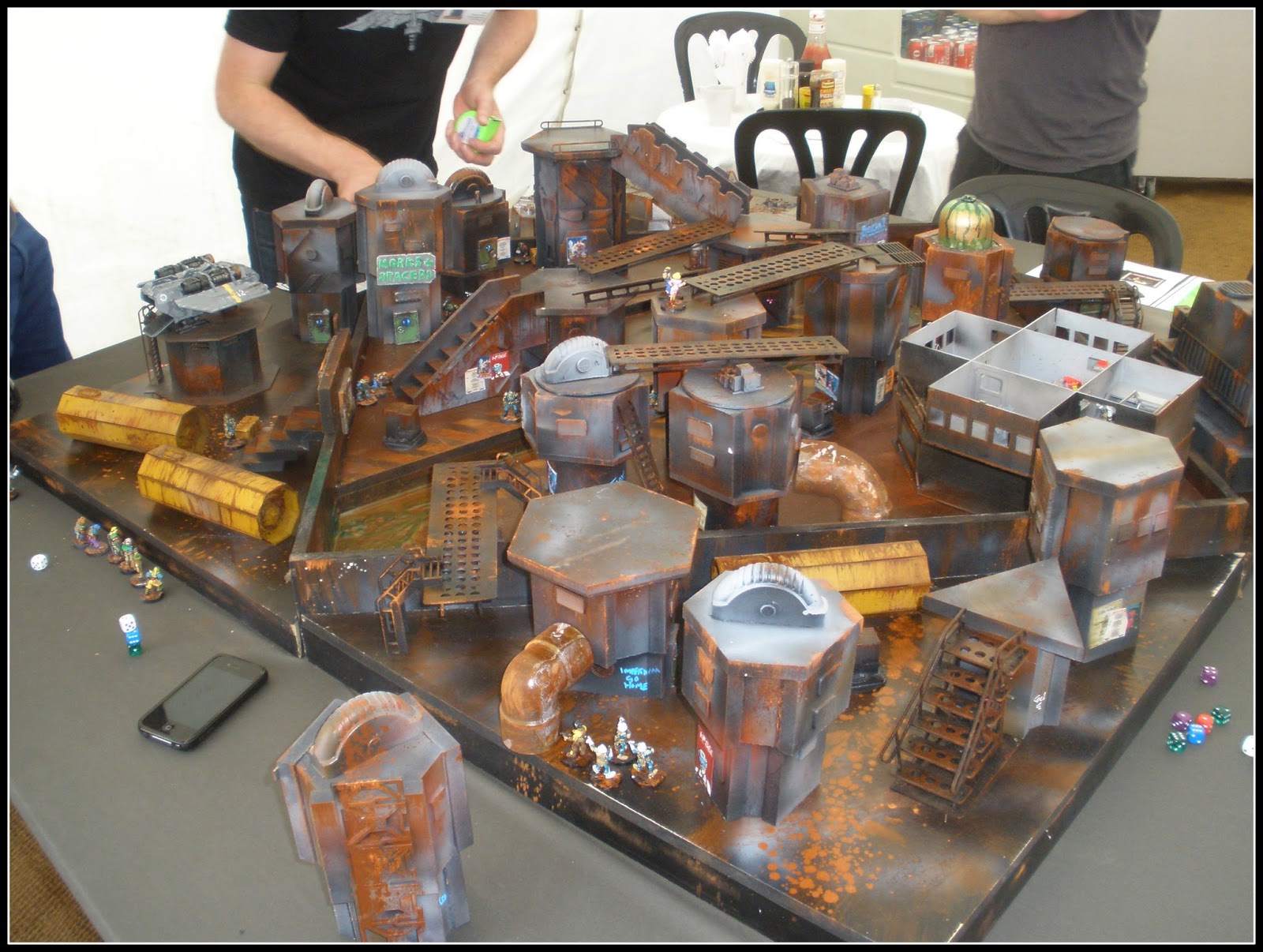 On the left as you entered was Whiskey Priest's excellent 'Ferrograd' table. Truly a sight to behold, positively teeming with beautiful scenery. Lots of fantastic games took place in Ferrograd over the weekend, check out the blogosphere, Facebook or the Oldhammer Plus G+ community for multiple reports. 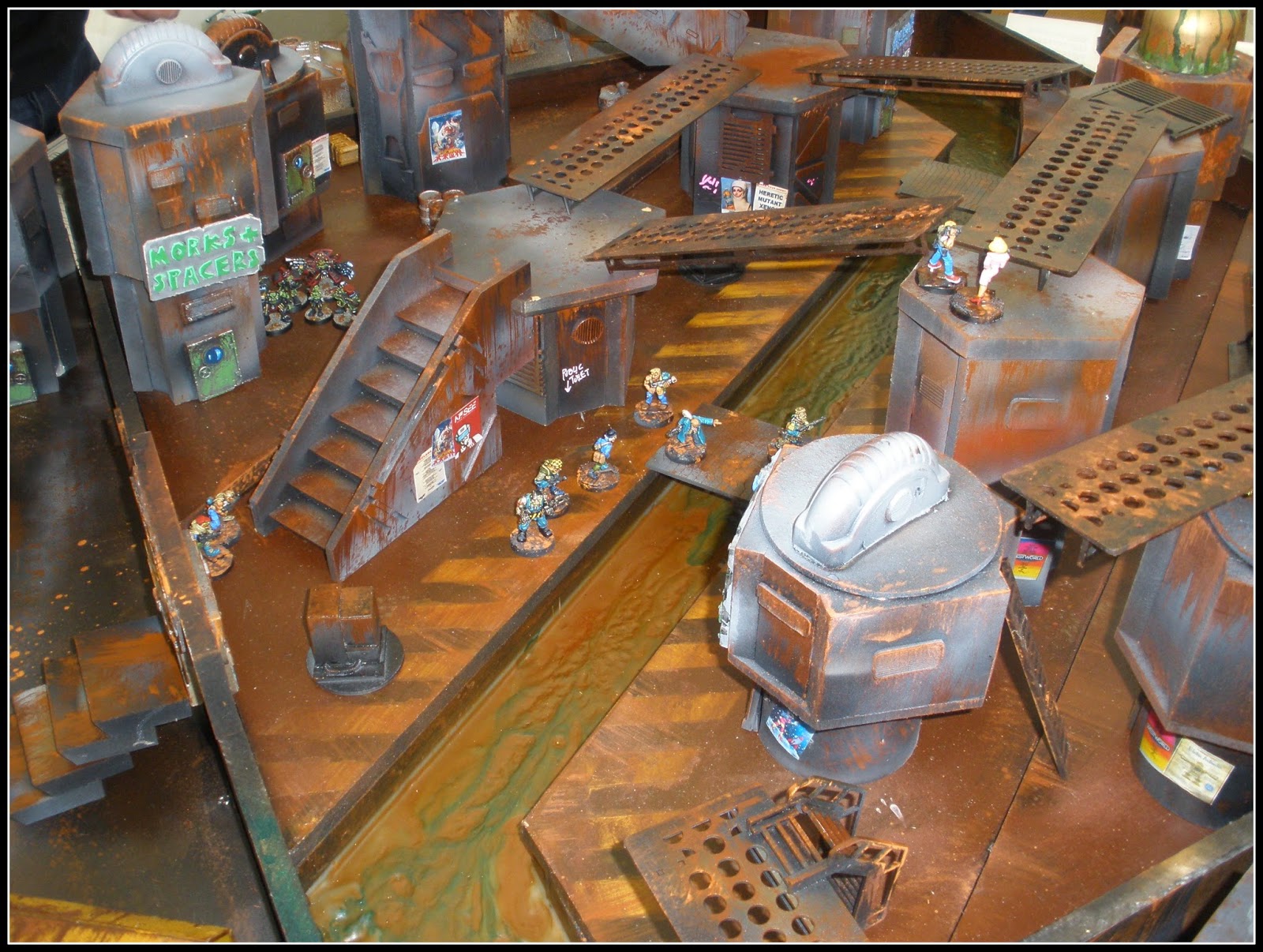 The little details bring Ferrograd to life, such as posters, graffiti and store signs. 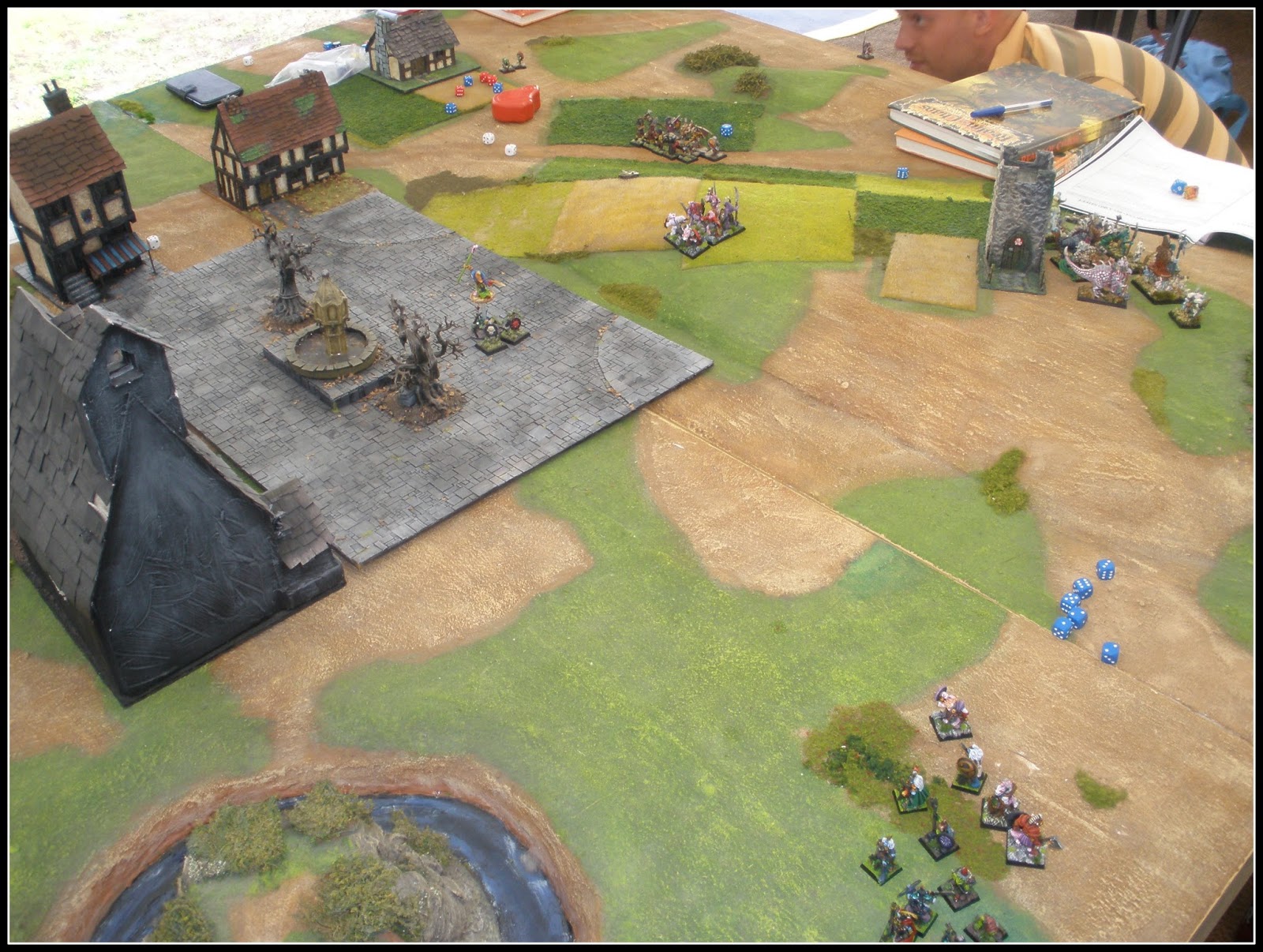 On the right as you entered, the classic table which seems to be everyone's favourite. This time it had an exquisite gothic village square set up on it, I was lucky enough to get a game in on this table later on which I'll come back to. 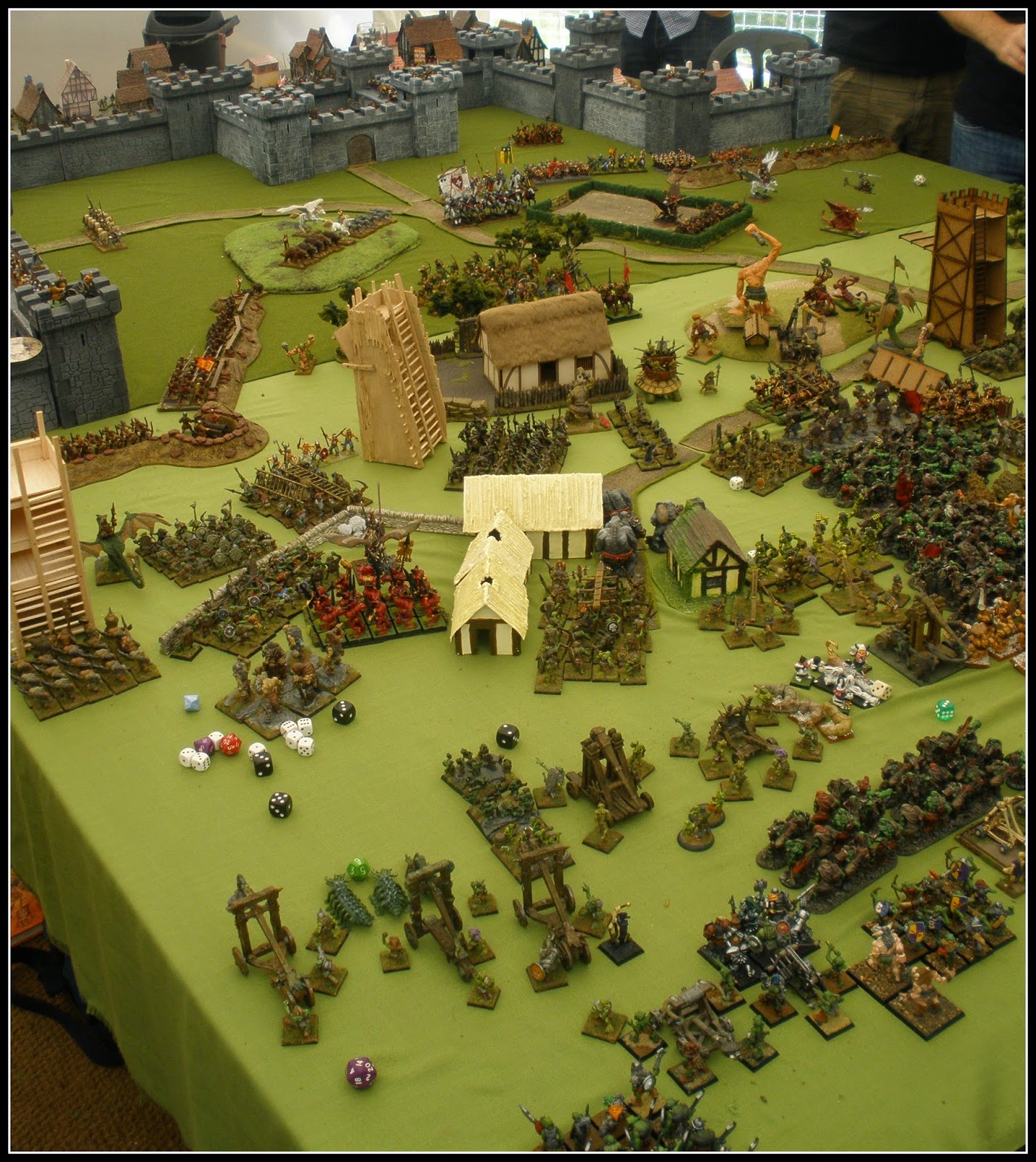 The madness that was the siege game! I despaired at the approach taken to this particular game (there was far too much emphasis placed on precision and slavish adherence to the rules and not enough good-humoured improvisation to speed things up) but despite my minor criticisms I have to say the happy faces plastered onto the participants for three straight days made this game virtually irreproachable! 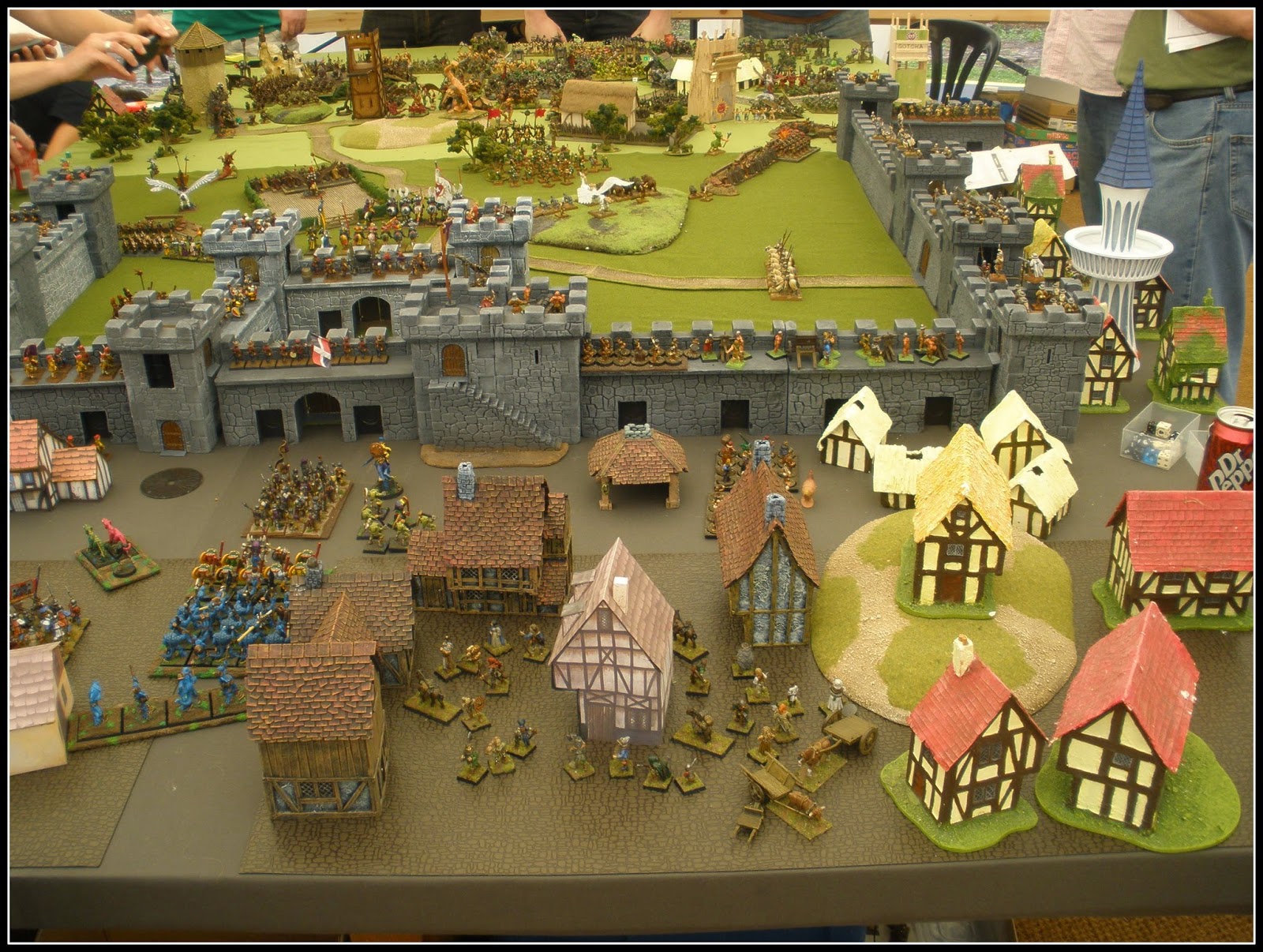 The objective, an enormous walled city. The defences were pretty solid and well thought out and the 'Siege' book has walls and towers virtually indestructible to damage from petty catapults and bolt throwers (which was all the attackers seemed to have) but nobody on the bad guys side seemed to mind. Even the inclusion of some pretty beefy giants couldn't make a difference! 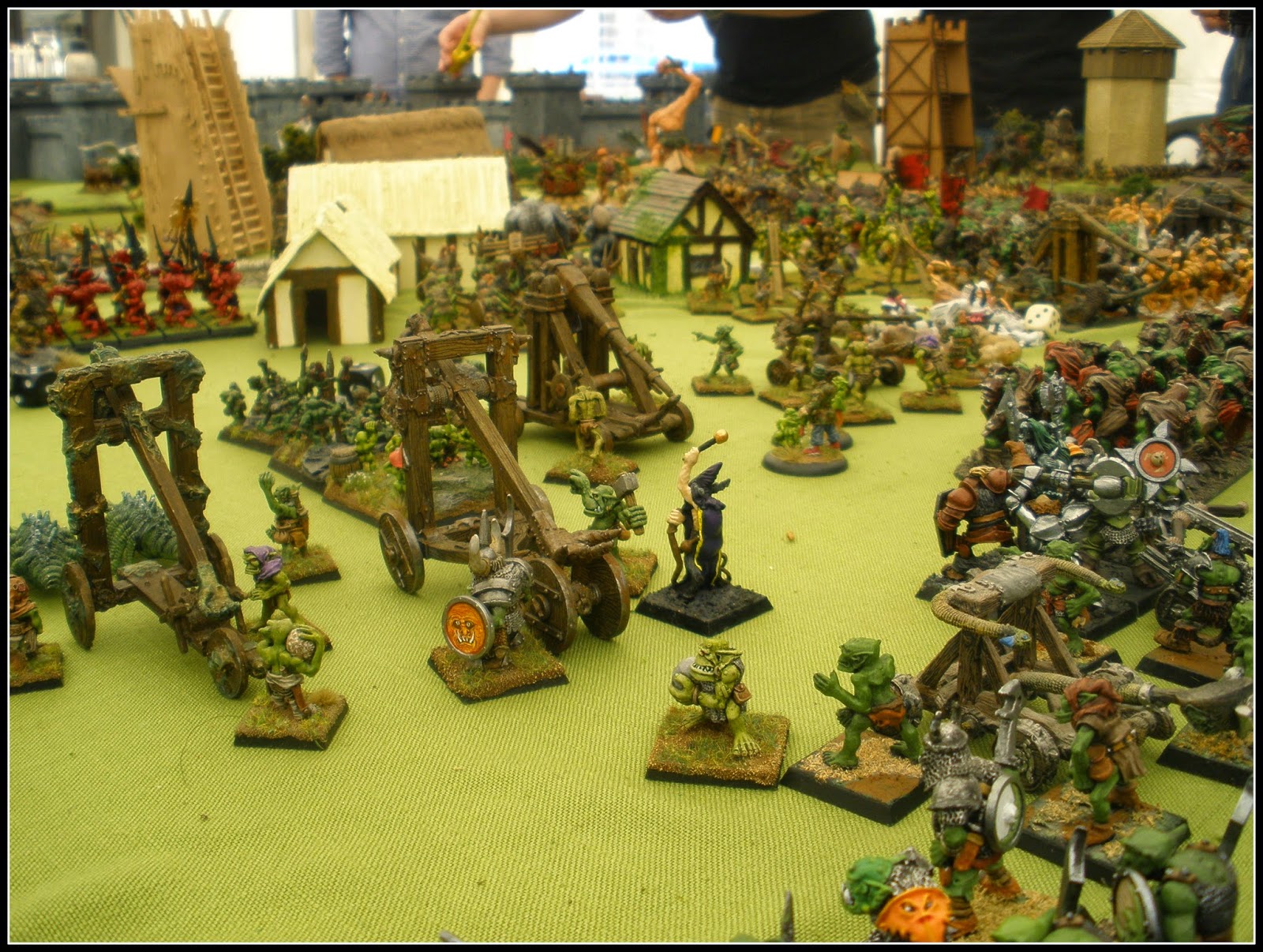 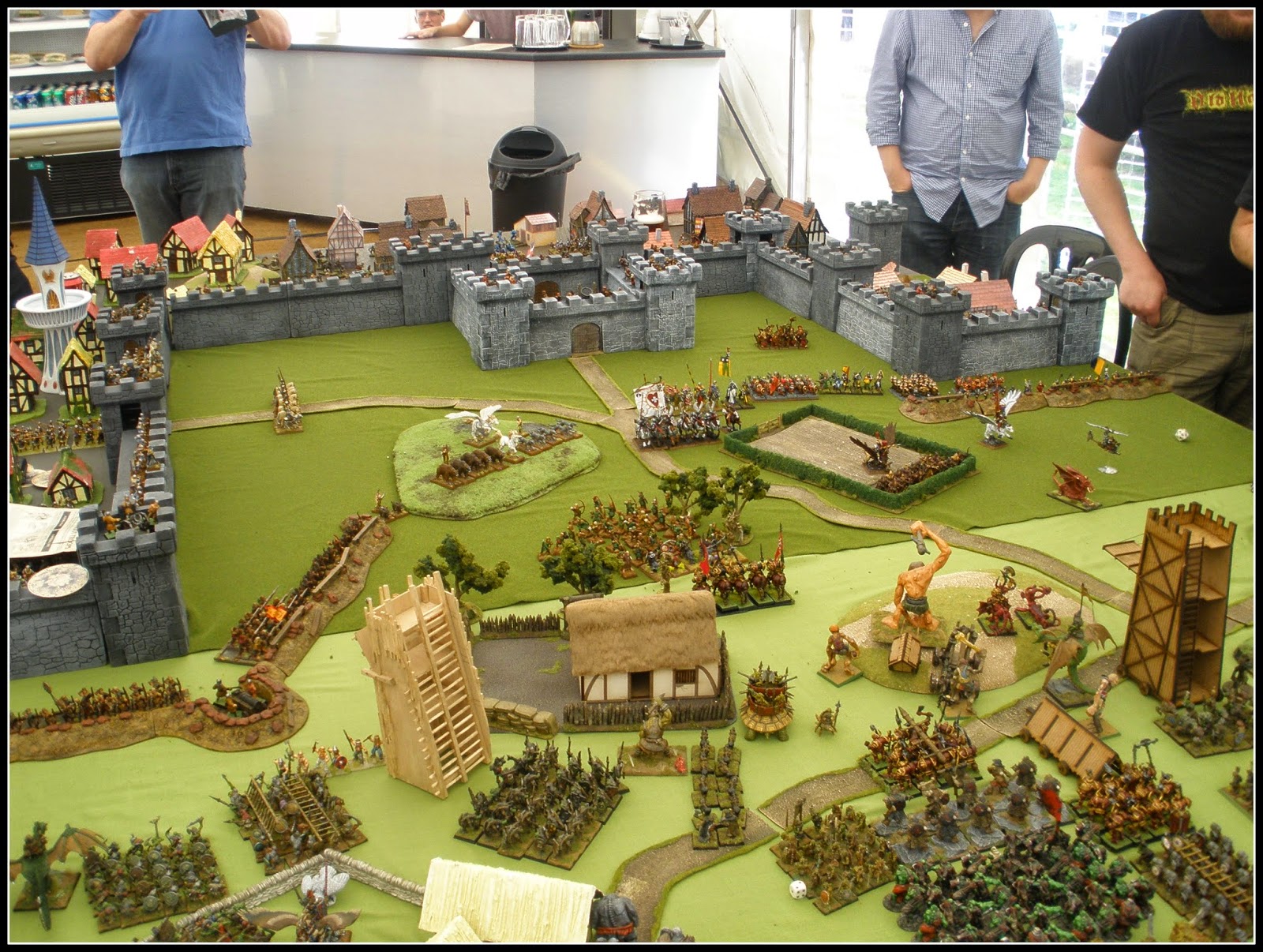 A nice shot of the city walls as the attacker's lines hit a high water mark. Note the excellent bar in the background which is where we were supplied with all our hot food and beer! 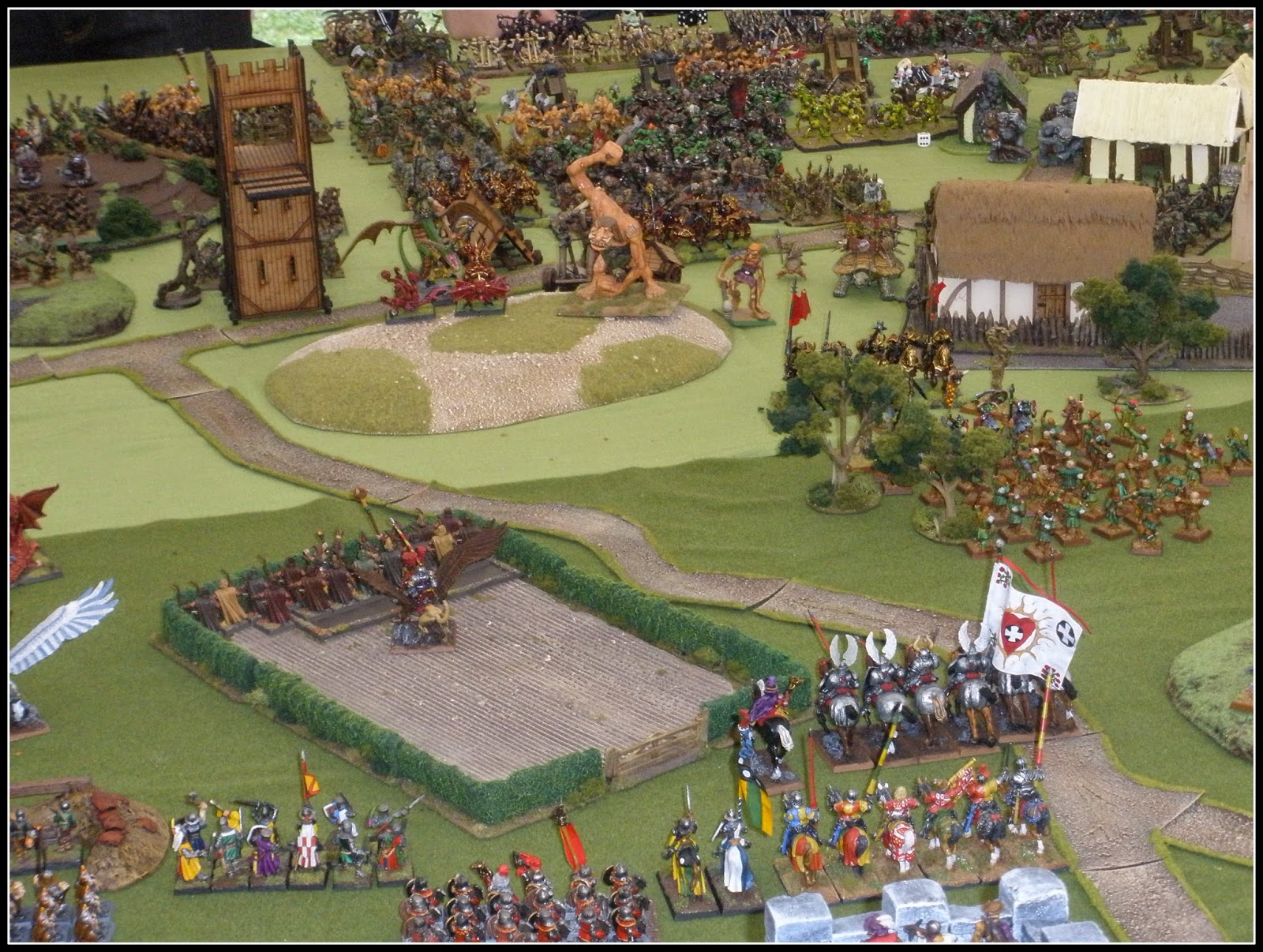 A great shot of the evil army with the classic giant at the head about to be met by a sally of elite knights from the city. There was action aplenty thanks to delaying tactics like this but I still think the evil army deployment was too far away to be considered fair (their artillery was well out of range of the walls and just sat there getting comprehensively flattened by an air cavalry brigade) and the game unfortunately lacked an independent GM who could have made such a difference to the pace of the game. A shocking oversight! If I sound critical remind yourself that this game was thoroughly enjoyed by all who took part, I only mention these things because this size of game is likely to be common as Oldhammer events take off around the world and there really was a lot to be learnt from this experience. 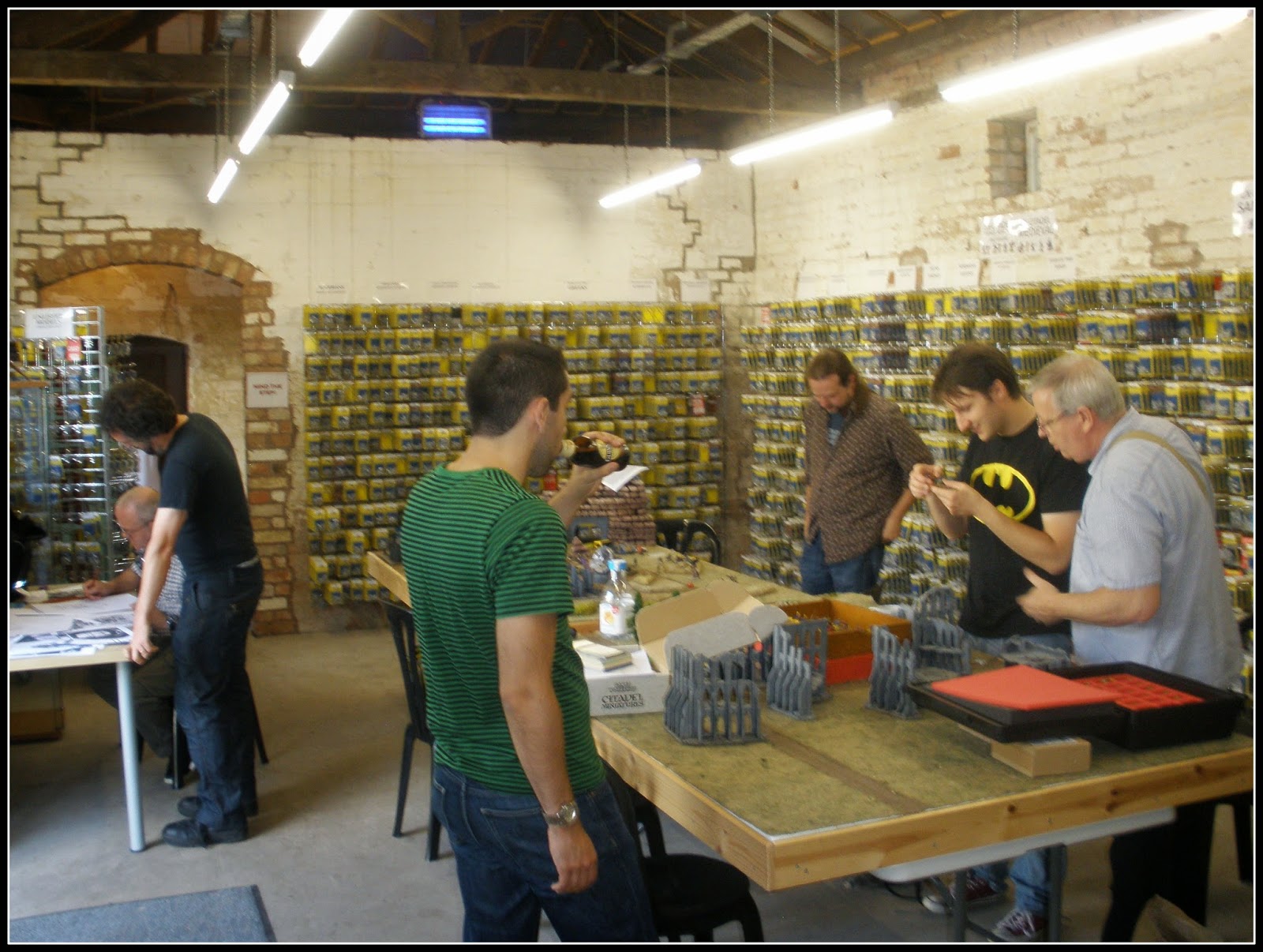 The main building itself was looking remarkably cosy considering the amount of time the Ansells have had to get prepared. There were four rooms filled with racks of Wargames Foundry blisters, three of which had gaming tables set up too. There are also very nice loos beyond the archway in this picture, important for a three-day event! The talented and charming Tony Yates set up in this room and delighted his public with dozens of sketches and anecdotes. 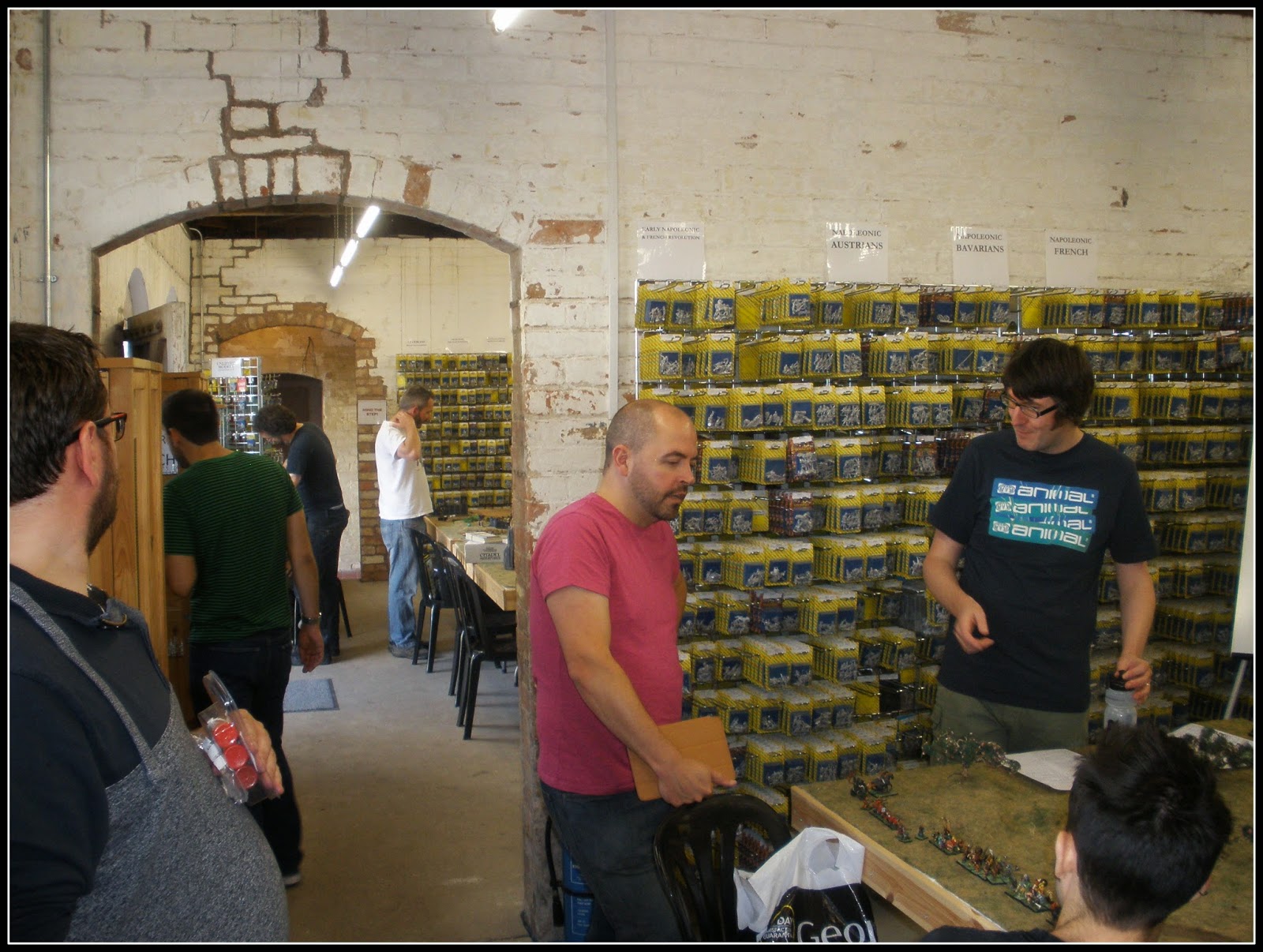 One of the Oldhammer founding fathers, the author of Warhammer for Adults, thrills a young crowd of enthralled newcomers with tales of yore. 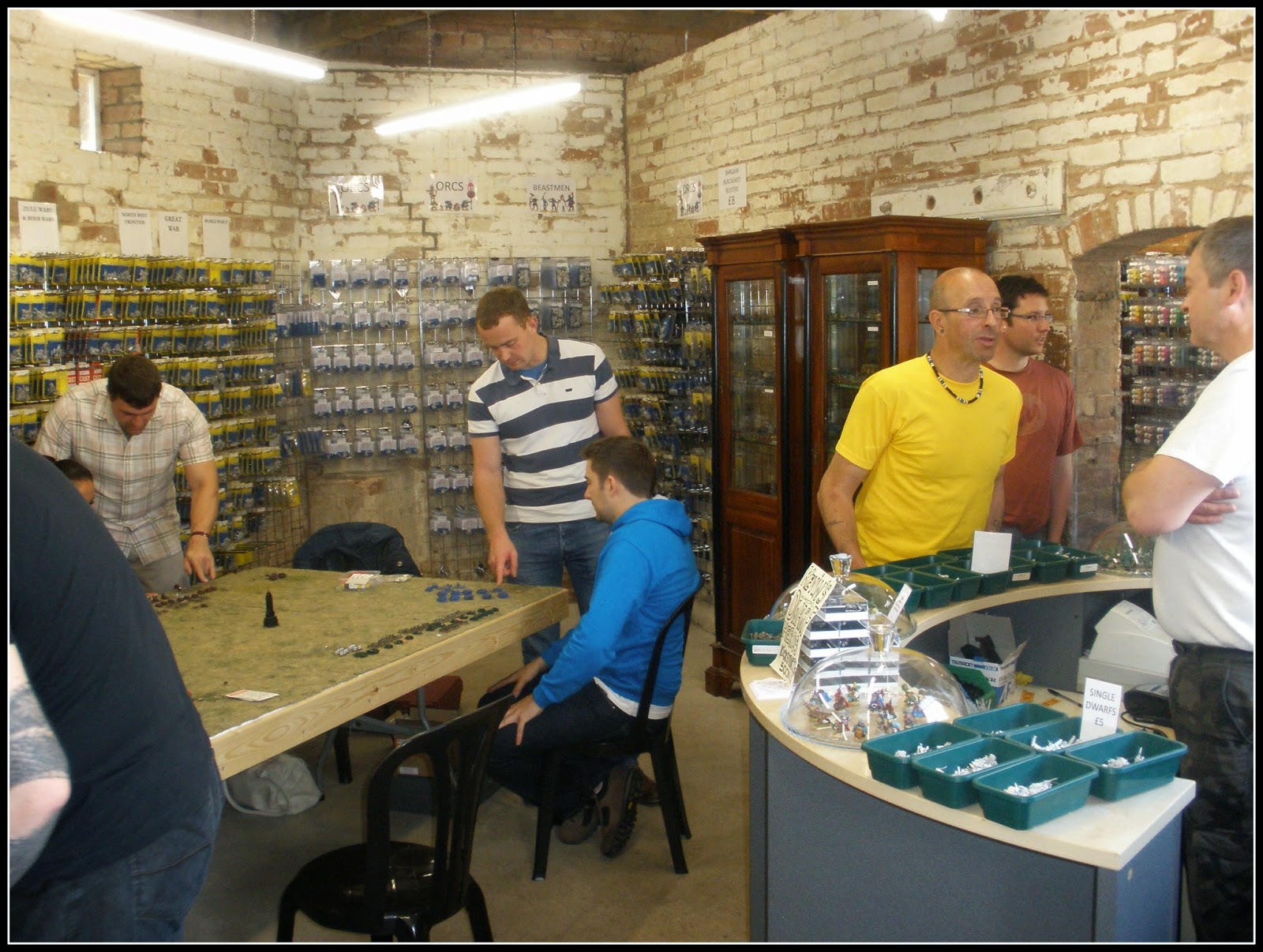 The Goblinmaster himself was on hand with a sackful of greens to chat to anyone interested in the art of making a perfect gobbo. One more room beyond which I didn't photograph as it was just more blisters. 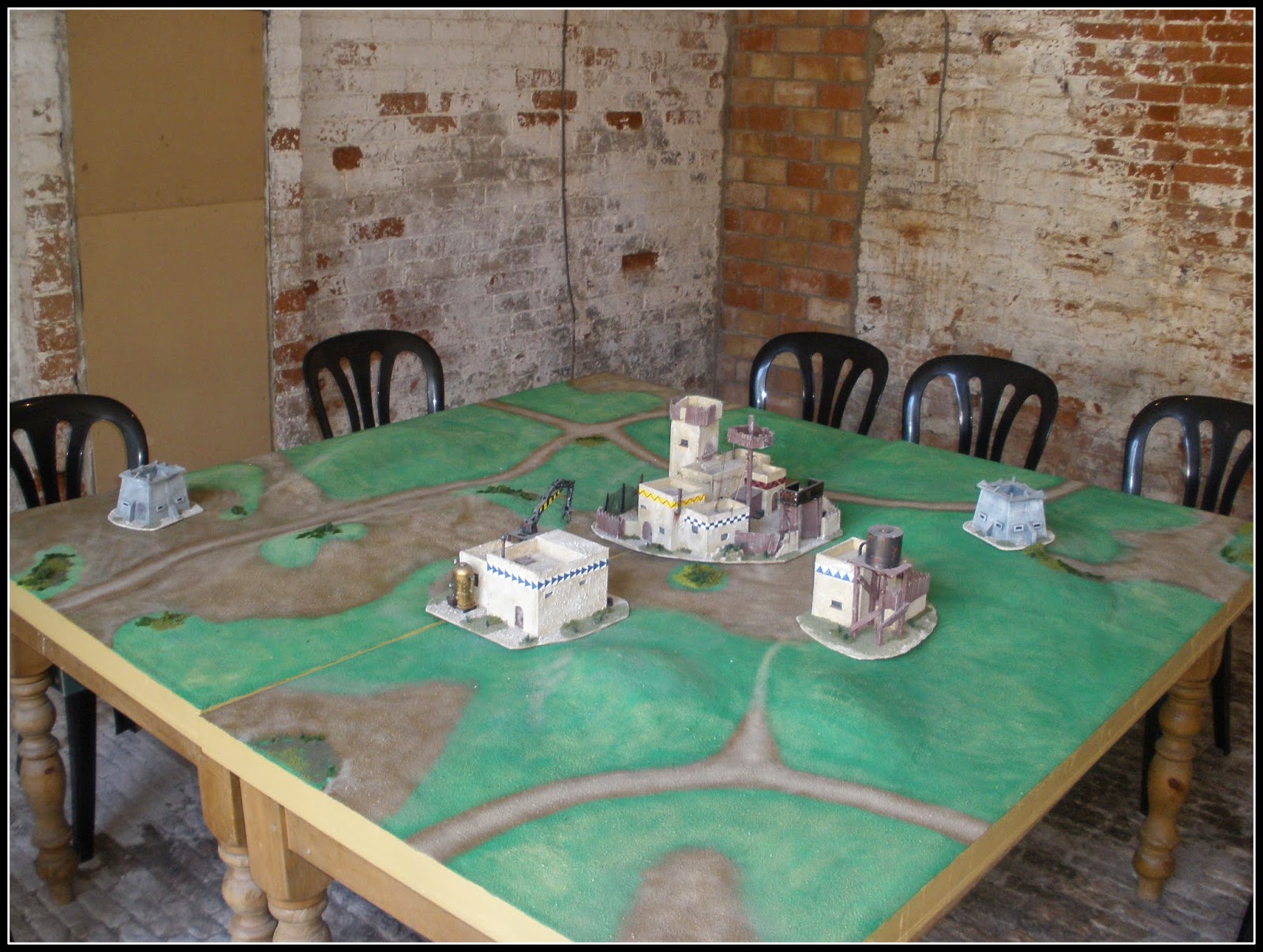 Another nook of a room, behind the marquee. A very suitable cubby-hole for a quiet game away from the crowds. 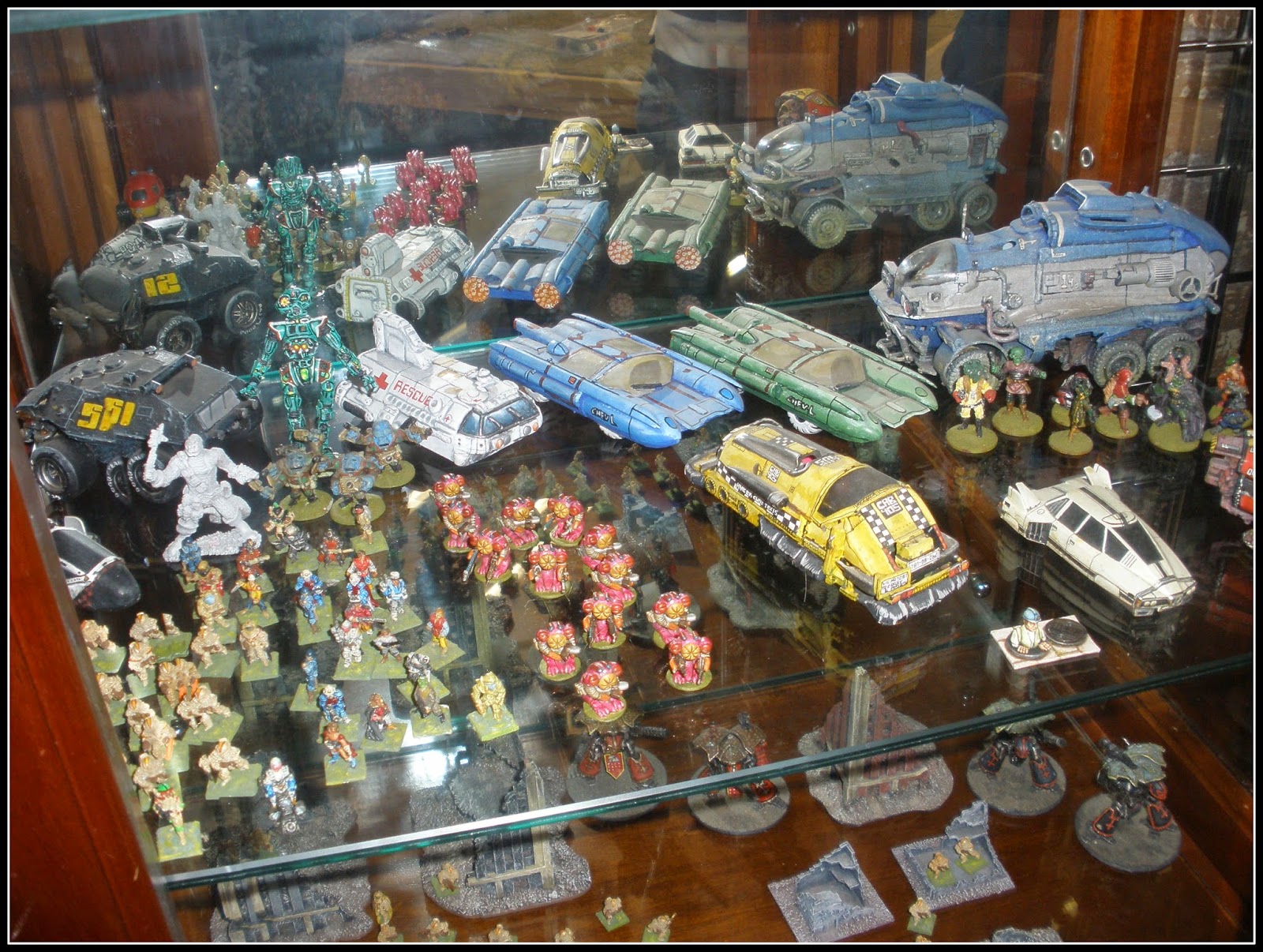 There follows a snap of each shelf of the display cabinets. All the minis from last year were rotated out for fresh ones from Bryan's 80,000 strong Citadel collection. 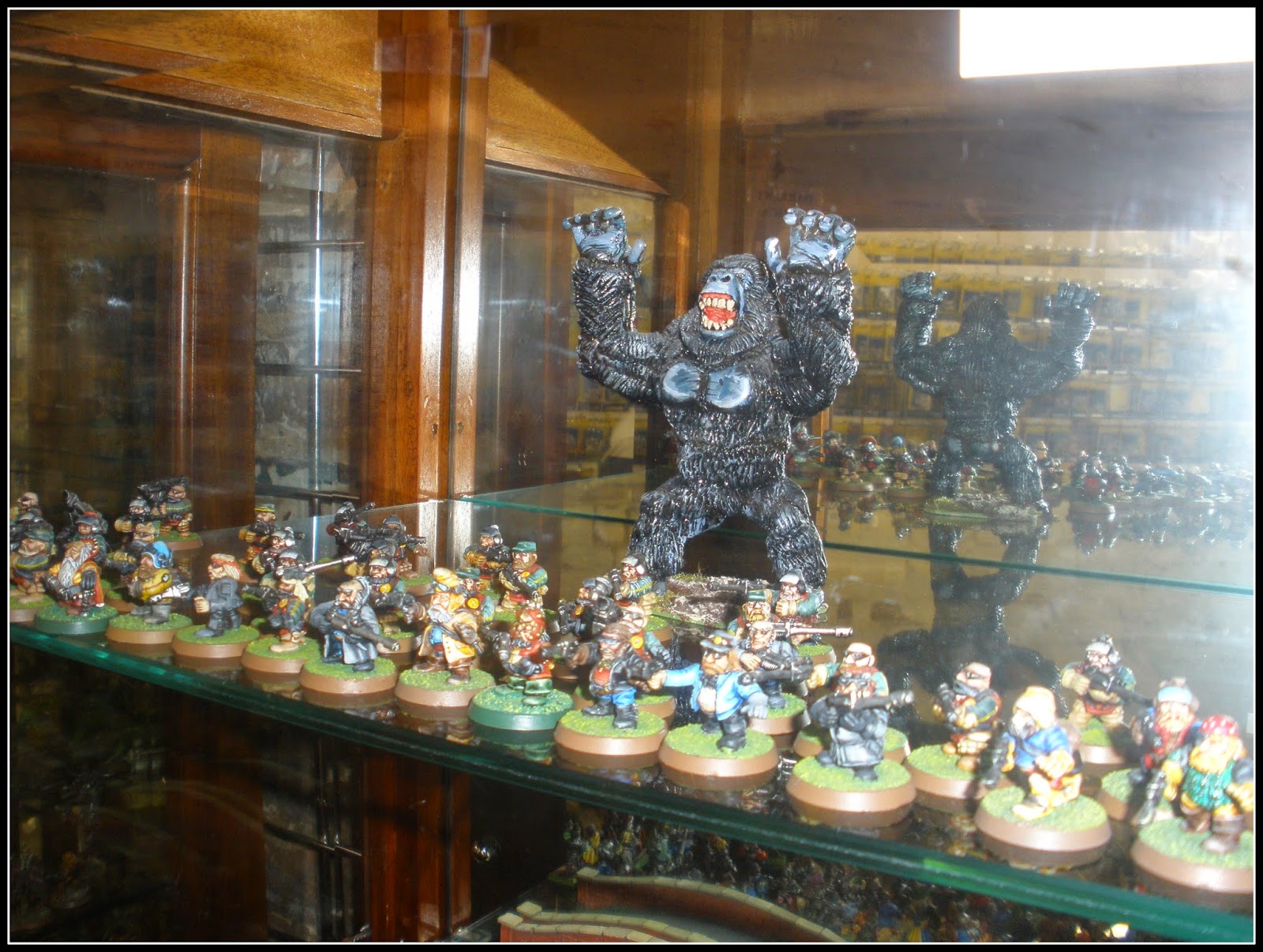 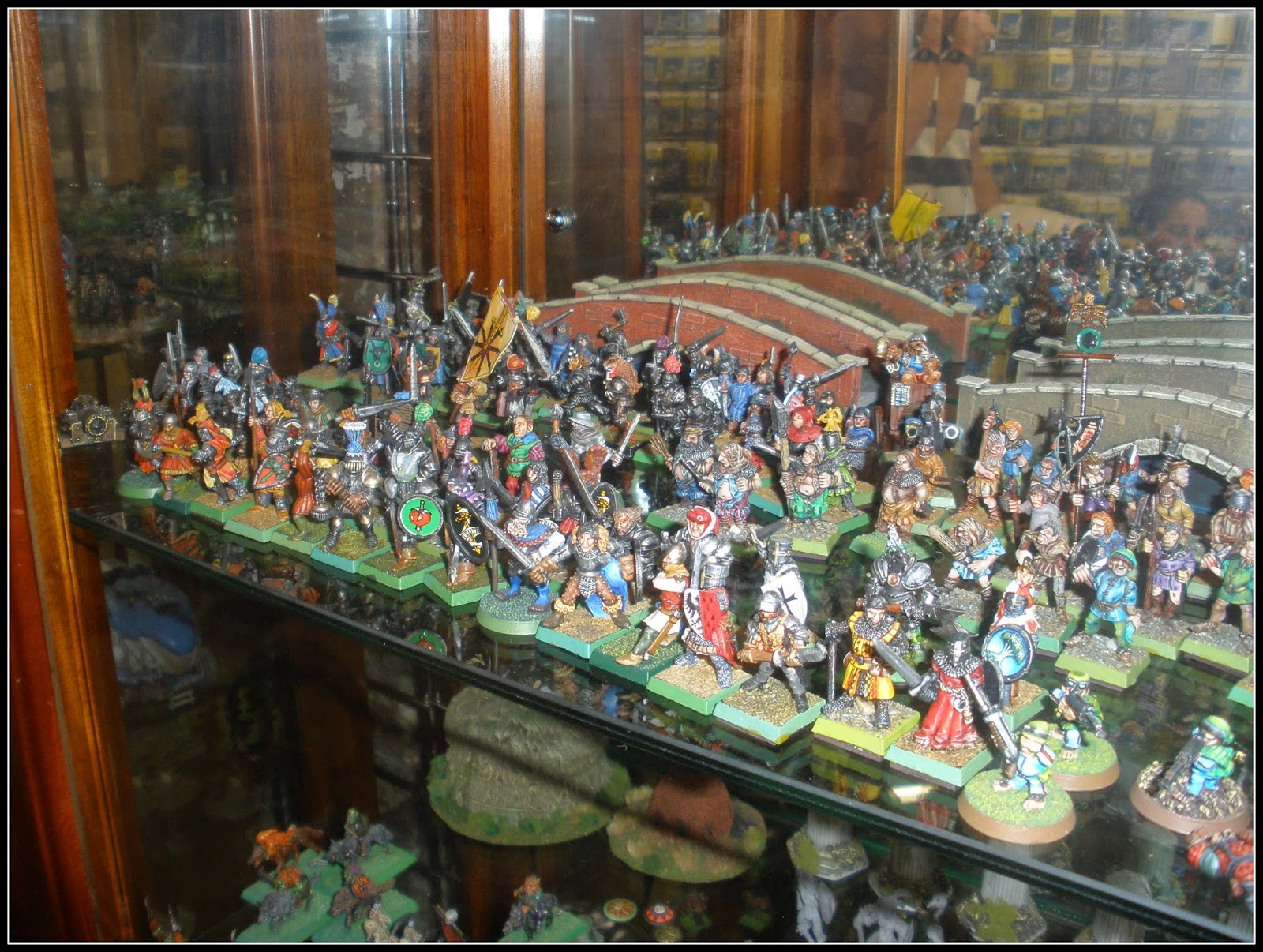 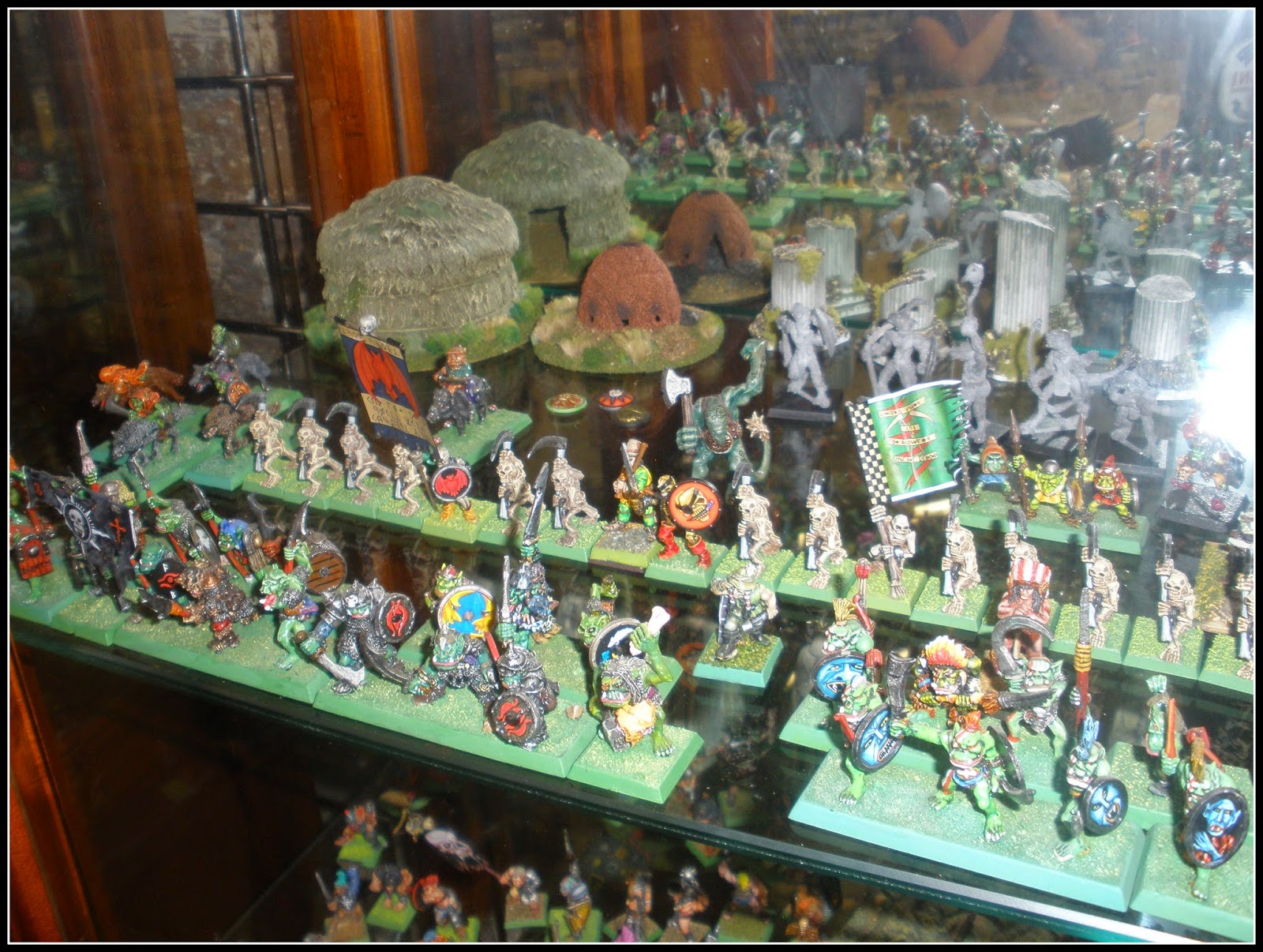 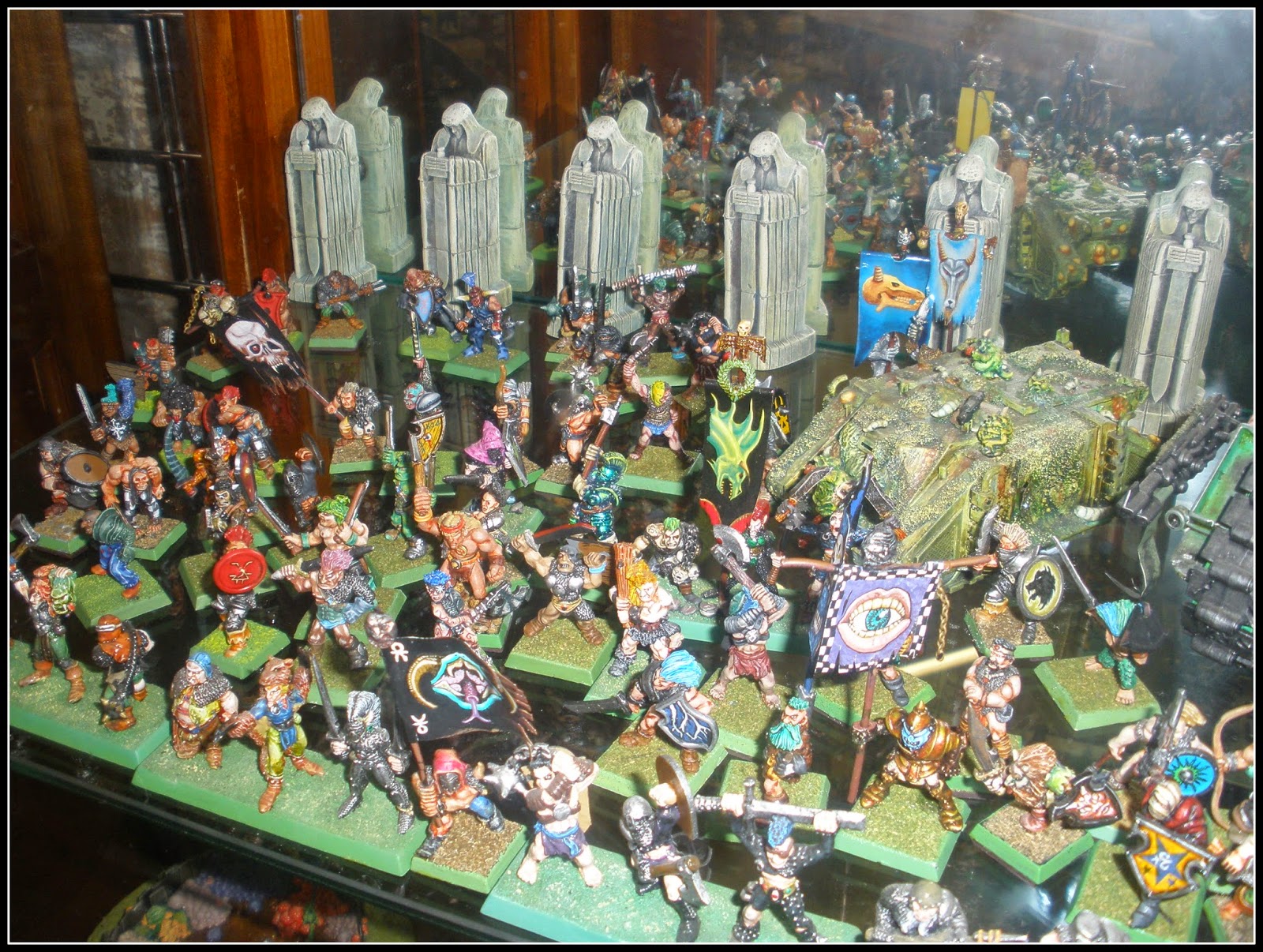 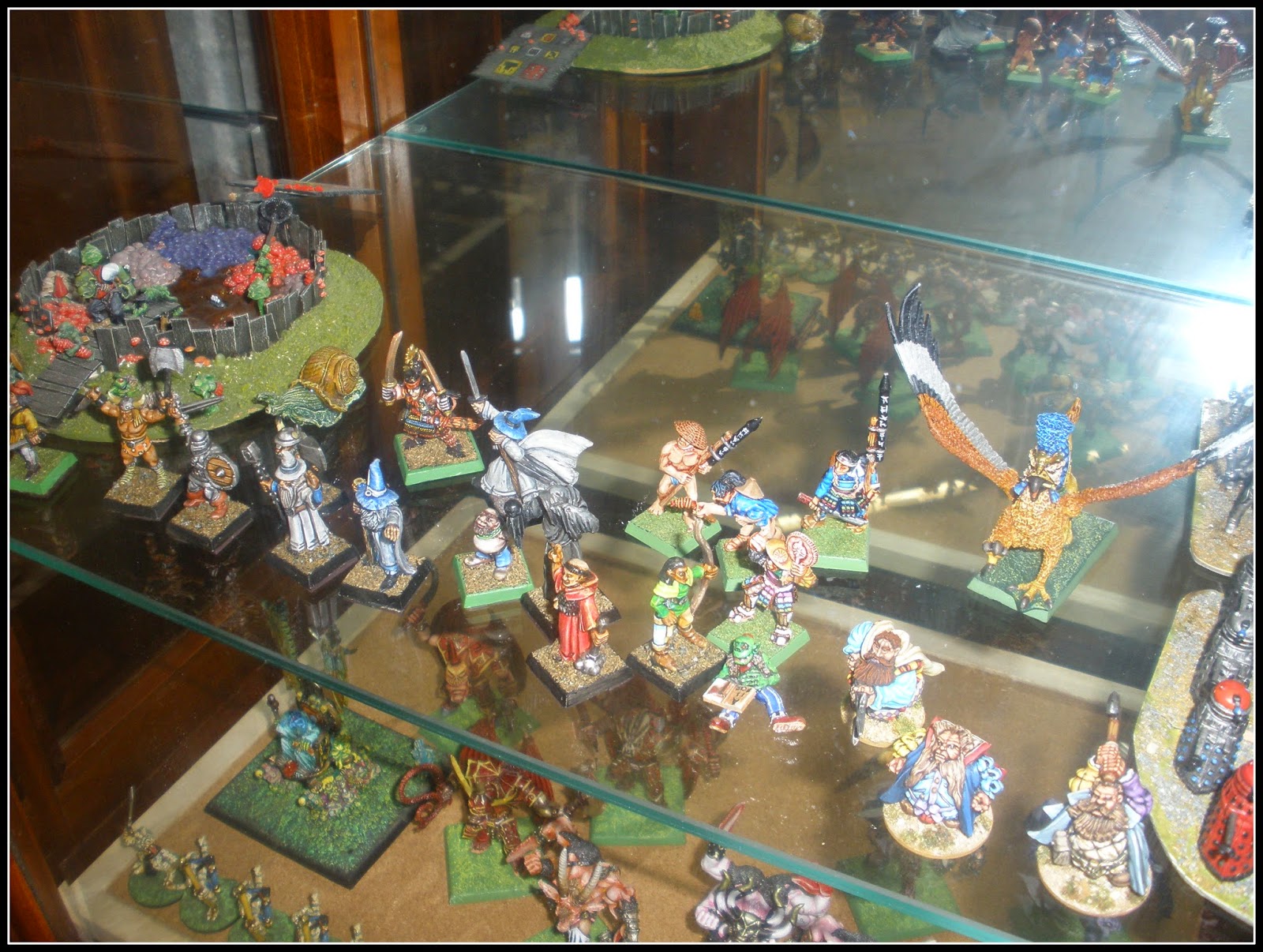 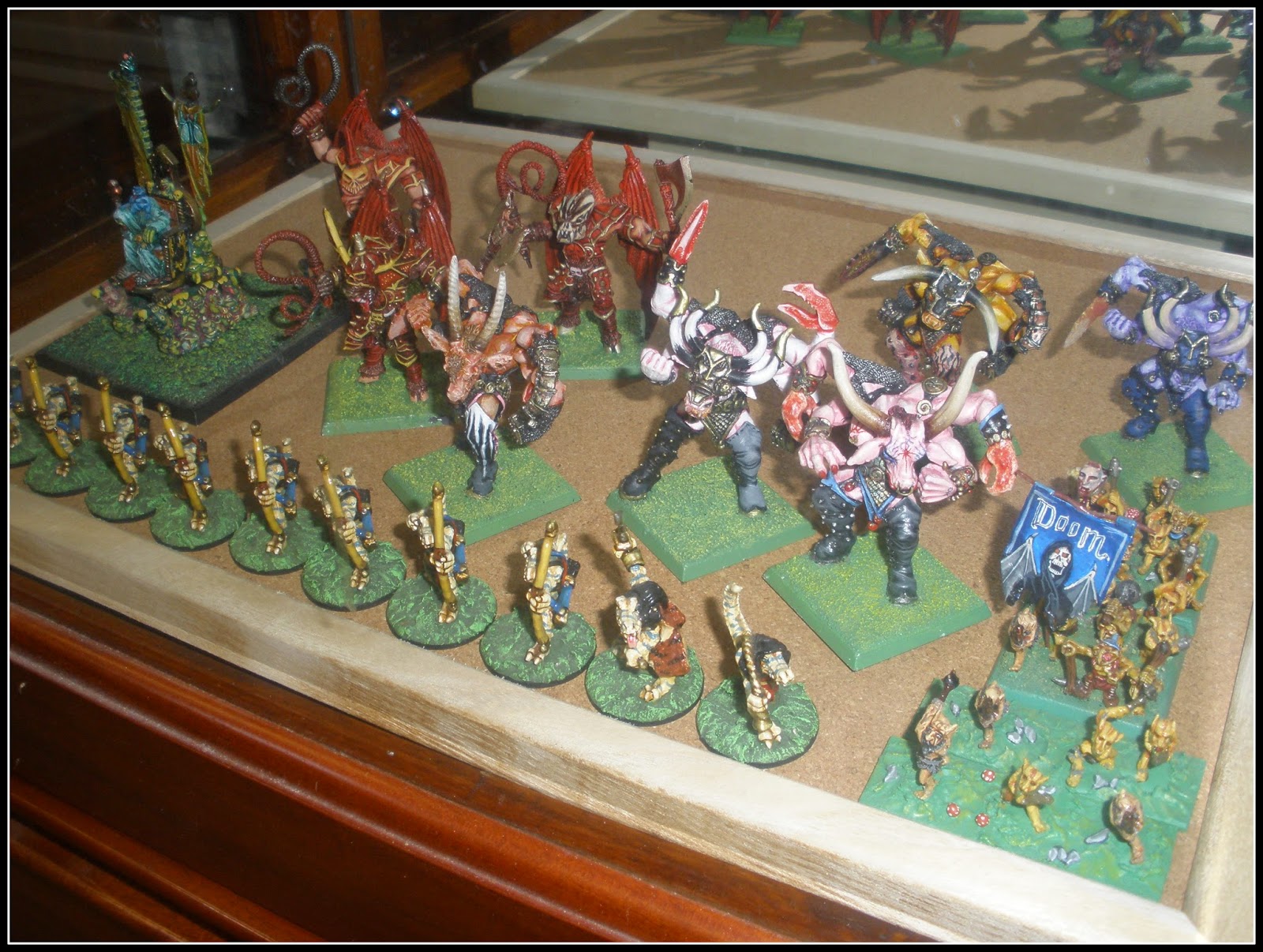 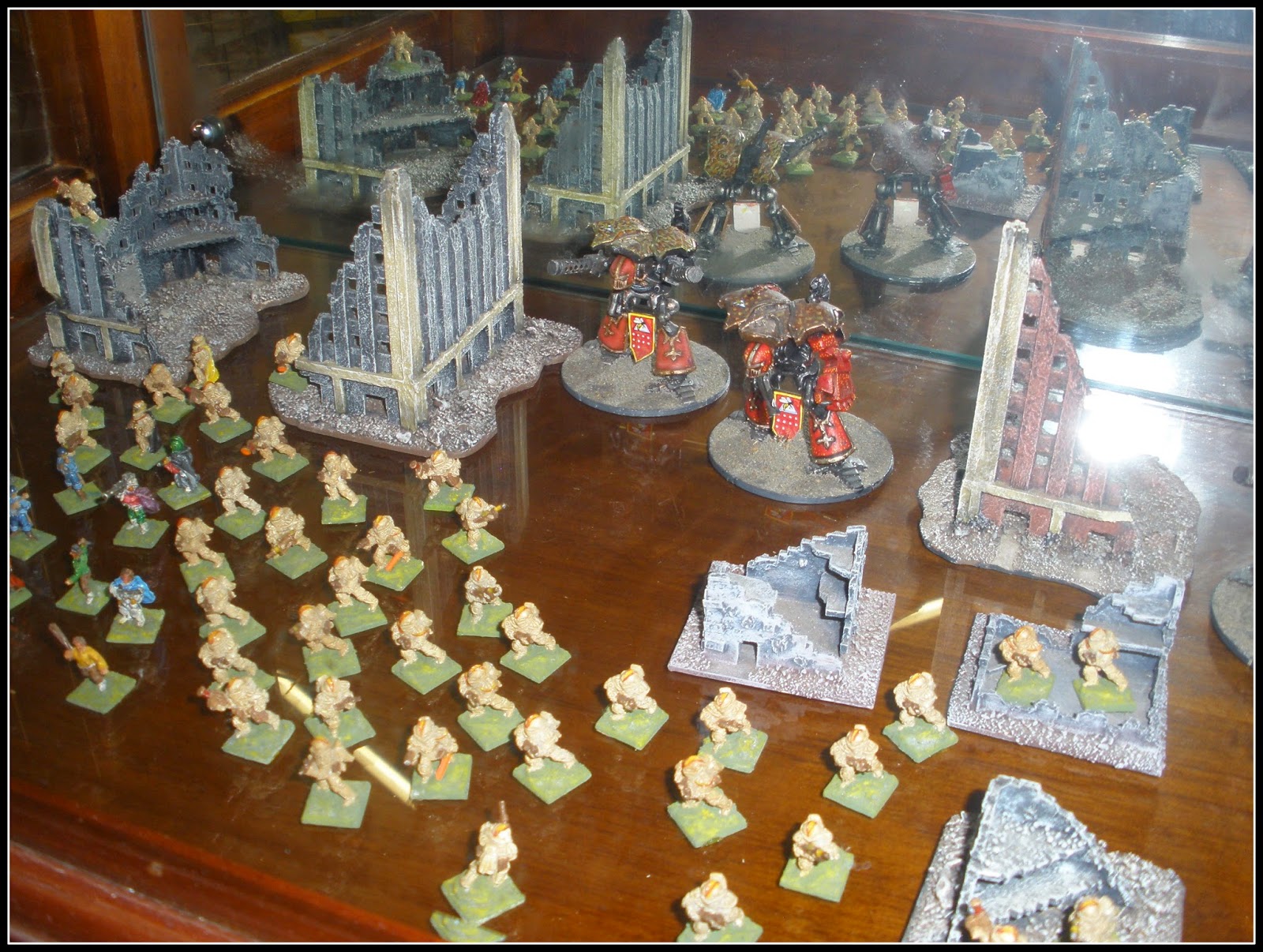 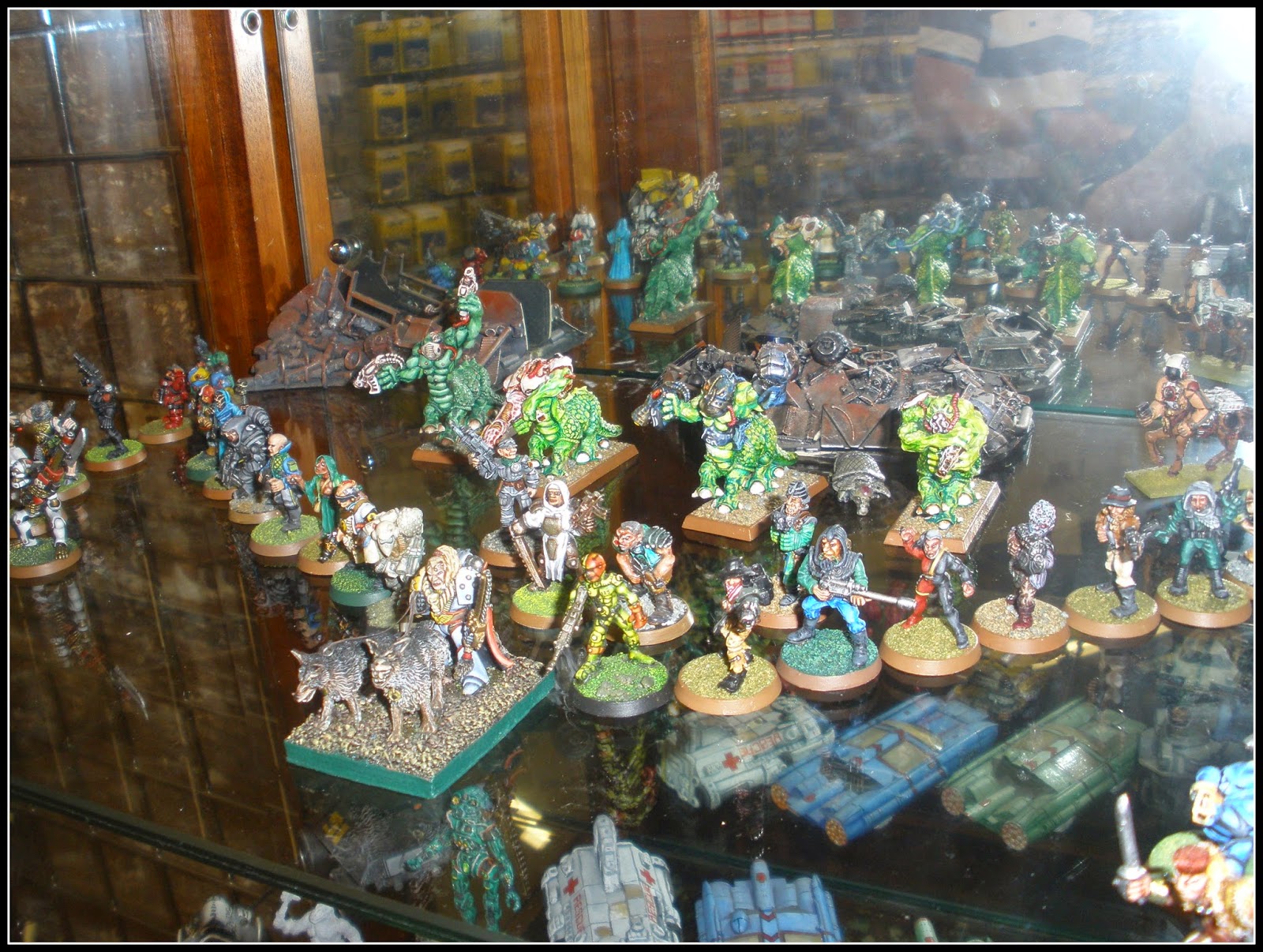 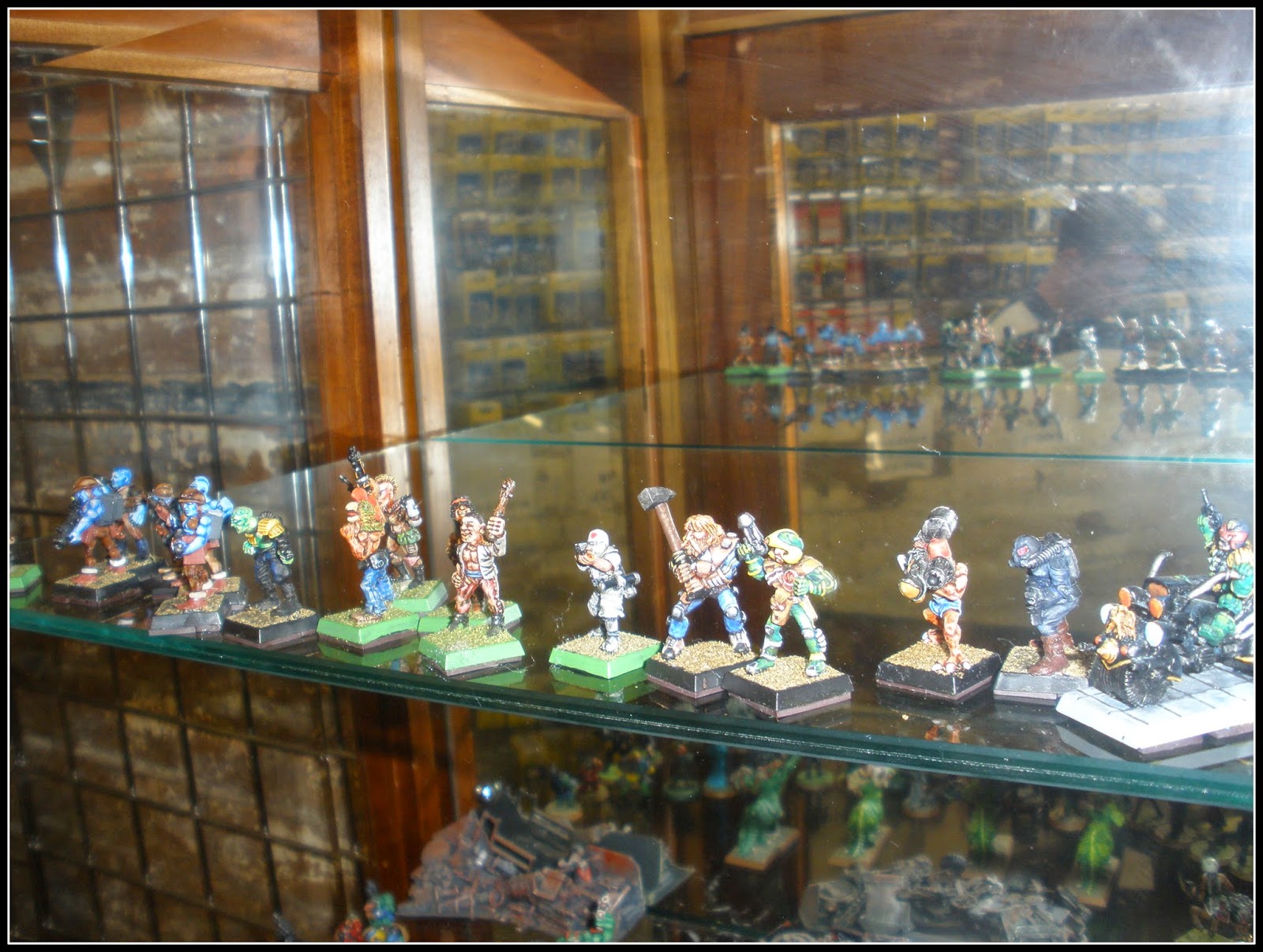 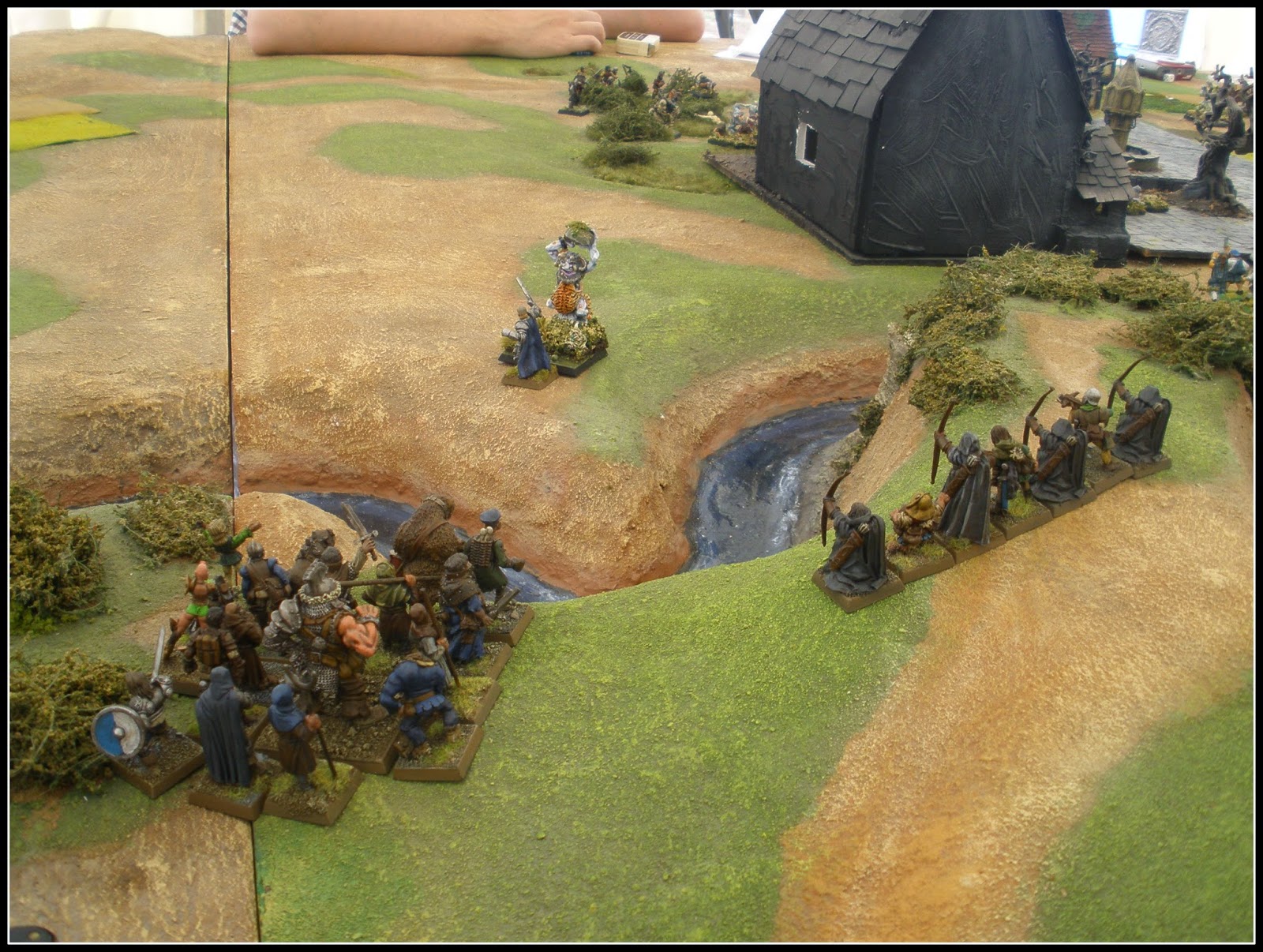 A shot of my 'army' (only two units) going into battle. I was up against a couple of Chaos warbands who struggled against the static combat resolution of my infantry block (I have written about this before) but fortunately we had an excellent GM on hand to keep the game balanced and free-flowing. 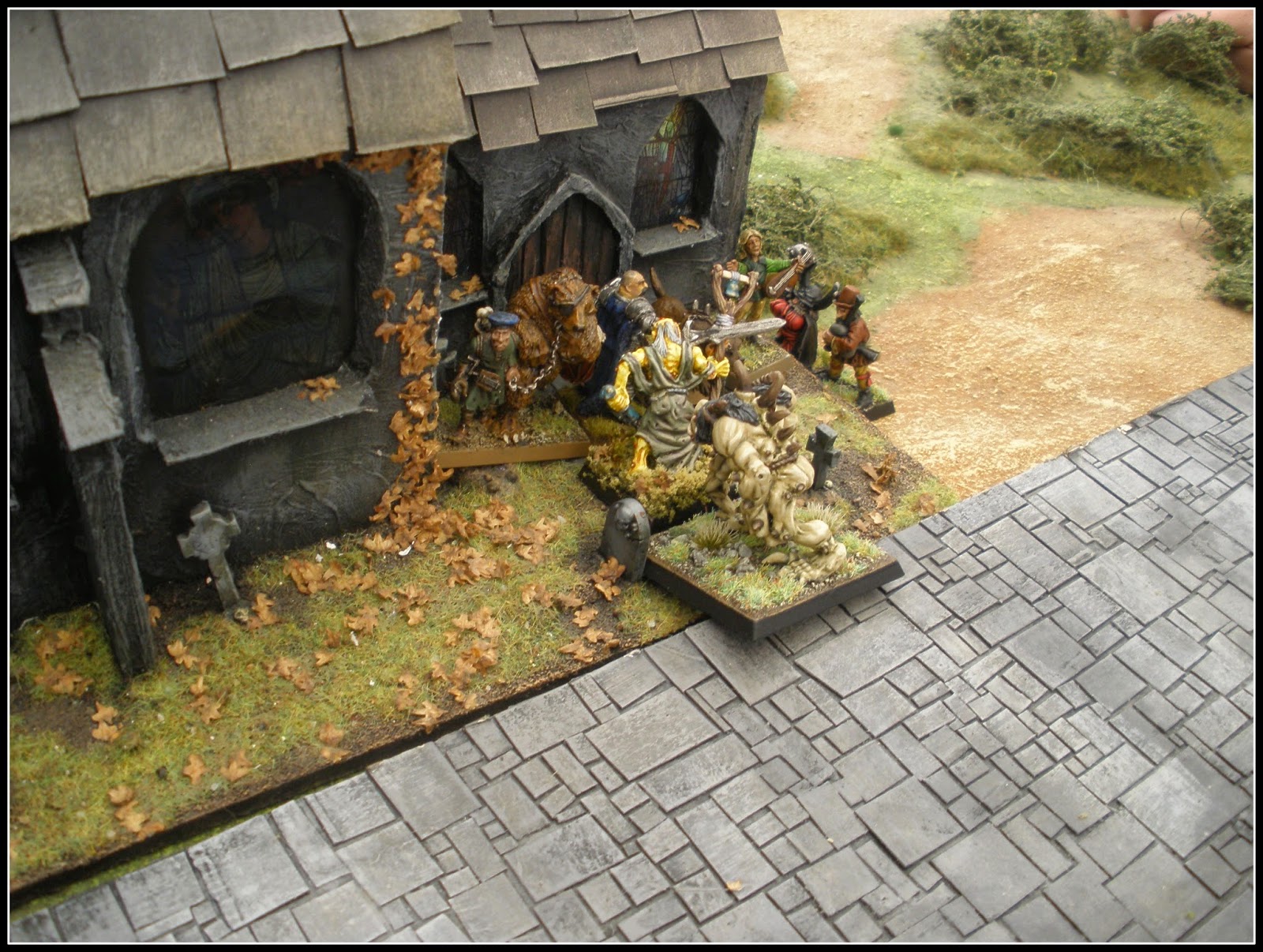 A cinematic high point of the game, my emerging hero and some followers leave the church only to be ambushed by sundry chaotics! After the game my 'champion' lost the use of his legs only to gain levitation. Most of his followers shrunk to a tiny size and he now keeps them in a bag and uses them to perform minor tasks on the battlefield. If I can find a suitable 'levitating knight' figure you may see him back again next year! Suggestions welcome.

Thanks for stopping by!
Posted by Warlord Paul at 06:02

Email ThisBlogThis!Share to TwitterShare to FacebookShare to Pinterest
Labels: BOYL 2014