I will elaborate a little further on my experience playing Execution Force last night seeing as there is some interest. First of all, let's take a look at the board and get to know it. 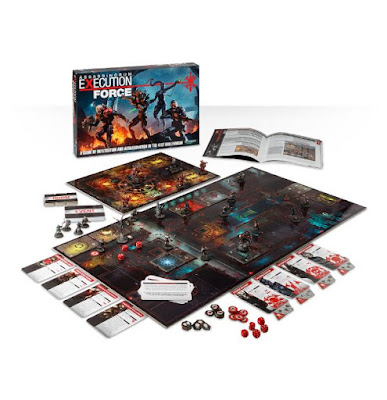 Hello board, how you doin'.


What you see in the picture is the four board sections (three that fit together and a fourth that floats off to the side which needs teleporting to), an event deck, a room deck, the rules, stat cards for the minis of both sides, a few tokens and some dice.

The human players take on the role of four assassins, one from each temple, and the aim of the game is to infiltrate the lair of an infamous Chaos sorcerer and execute him before he can complete a terrifying ritual.

Your guys begin outside the structure represented by the three connected boards. Four of the six entrances will be guarded by a cultist sentry (decided randomly) and all the rooms are blank. After you slip in (through one of the two empty doors) you must get line of sight to unexplored rooms and flip over the room cards from the deck. You are looking for the teleporter that gives access to the sorcerer's ritual chamber and the control panel which is in a separate room.

Each assassin has a stat card which is packed with all the information you need to operate them. Unsurprisingly, the Vindicare is best when shooting from a stationary position and the Eversor excels at melee. The Callidus is sneaky and the most versatile and the Culexus comes into his own when psychic problems arise. A nice touch is the addition of some limited resources such as grenades, frenzon and special ammo. These can be spent during the game to get you out of a fix but are best reserved for use as late as possible! 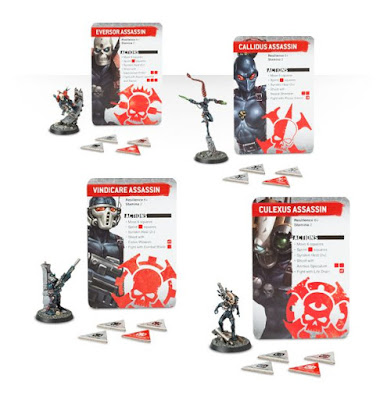 The game is split into an assassin turn and a Chaos turn. The Chaos forces are not in the same league as the assassins but it is not simply a case of running around rolling twos to slaughter them. It is necessary to plan your advance and your tactics carefully, working as a team by supporting individual assassins and exploring with a degree of foresight. 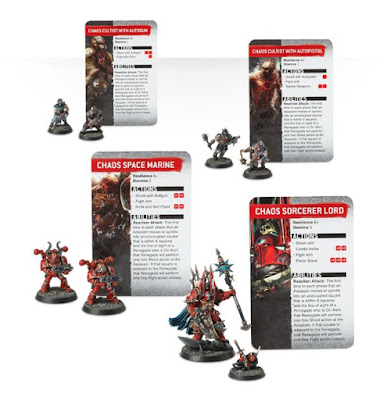 When a room card is flipped over it will show how many cultists appear and what direction they face. Thereafter they patrol around the board following a number of criss-crossing routes marked by arrows. At junctions the players roll dice to see what paths the cultists take. The Chaos defenders decisions are all decided by either dice rolls or a flow chart printed on the back of the rule book.

Lines of sight and movement both follow straight lines, not diagonals. This and the lack of human agency for the enemy are the most abstract factors of the game, though in reality when you're in the thick of it the overall feel is of a tense, stealthy insertion behind enemy lines, punctuated by short and brutal encounters that can be followed by dangerous periods of frenetic activity as the enemy reacts to your presence. All tied together by a final climactic confrontation!

The best thing about the room cards is that depending on where you are in the complex you draw one, two or three cards and pick the lowest numbered room to encounter. The others go back in the deck. You can use this to your advantage by plunging into the one-room-draw area and hoping for the objectives to appear but the terrain requires much more thought to use effectively. There is also the risk that you don't get both the rooms you need and subsequently get drawn deeper and deeper into the lair searching for the controls, only to have to fight all the way back to the teleporter at the other end.

The little Chaos familiar fellow is used as a turn tracker. The time limit keeps your mind focused and adds an extra element of tension, especially when something goes wrong and things get bogged down for a turn or two.

Combat works on the tried and tested principles that have made 40k such a perennial success. In the assassin turn your guys get to shoot or melee with D6, applying bonuses where applicable, and have to beat the 'resilience' factor of the defenders. There are many special rules that can be brought into play when circumstances allow by a canny player. The Chaos turn then sees the foe (if they survive your onslaught) fight back in the same way.

Cultists feel like an inconvenience and Chaos marines feel like a more worthy foe, while the sorcerer himself is quite the challenge. We lost our poor Callidus along the way, and missed her bitterly in the finale. Fortunately we had carefully hoarded our resources and the sorcerer was slain by the combined efforts of three assassins over two turns.

Hope that has helped better inform the curious amongst you!