Foundry game on the 5th of April: Intro fluff and venue details.

All set for the 5th?

'Gnome on the Range' is the special 'Warlord Paul presents...' game that Wargames Foundry have very kindly agreed to host on the 5th of April 2014. The intro fluff is written below and I will go over some details at the end of the post.


Gnome on the Range.

For years the Gnomish Casey family has lived peacefully on their cabbage farm in the remote borderlands between Stirland and Sylvania. This area is far from the civilised, urban hubs of the Empire and both tax collectors and militia are a rare sight indeed for the Gnomes who, led by their patriarch Colonel Casey, have always looked to their own defence in the (thankfully rare) times of strife. 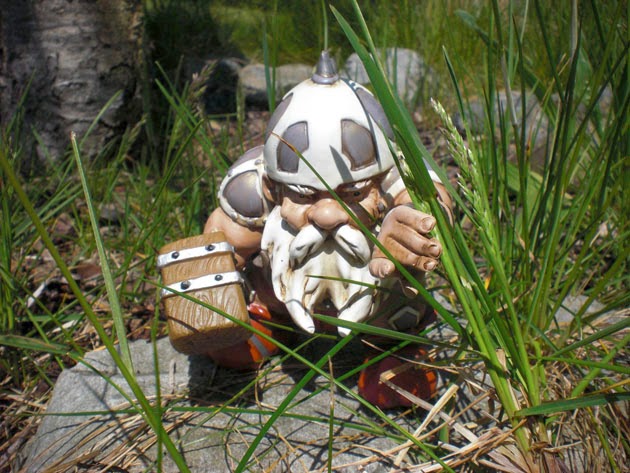 The Colonel in action.

Usually when problems arise it amounts to no more than a few gnome-zombies shambling out of Sylvania but now, their old liege-lord Baron Coleco lies dead having been ousted by the ambitious Baron Hasbor who is building an army of renegades, mercenaries and ne’er-do-wells for purposes unknown. The usually peaceful borderlands are in uproar with troop movements, raids and skirmishes becoming more common by the day. 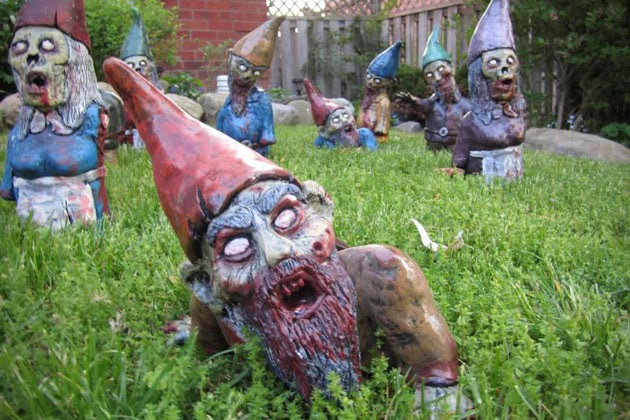 Worse still for the worried Gnomes, the infamous Sorceress Lavender McDade, along with her loathsome henchmen Cabbage Jack and Beau Weasel, have been sent to manage one of Baron Hasbor’s gold mines which happens to be very close indeed to the Casey’s cabbage farm. McDade has been told to increase the output of the gold mine by any and all means necessary and she means to enslave everyone nearby and put them to work, including the unfortunate Casey family!

“But Pa! We can better serve the Baron by feeding his troops with our fine cabbages, why does he not realise this and simply tithe us thus?”

“In the months ahead they will understand they cannot eat gold, but until then they will act only with greed and hate. Such is the economy of Chaos my son!”

YOU must decide the fate of Colonel Casey and his sons, Xavier, Bunnybees and Otis as well as that of the whole region by leading your forces in battle!

So, then, I'm planning to fit in three games in a sort of 'scenario pack' style that escalate from a small fight to a skirmish and then a larger battle in the afternoon. For those of you that have not been to the Foundry before, here is the address and contact details.

There is limited onsite parking sometimes available for those bringing lots of stuff but that would need to be prearranged. If parking on St Mark's street it is recommended that you do not leave anything on display in your car. There are parking spaces at the back of the Foundry but a cheeky private company sometimes dishes out tickets even though the land is owned by Foundry. These tickets are not legal in any way but may lead to annoying telephone conversations with grasping scumbags. I've never had any issues but I believe in covering all bases, forewarned is forearmed as they say.

Anyone planning to attend can PM me on FB or email me for my mobile number.

The first game will be small and you will likely have one or two models each. It should last around half an hour. The second game will be be an attack on a refugee column and you will have a warband of 15-20 models each, this will be 90 minutes long or so and take us to lunch (rolls and snacks are sold onsite and nearby). If anyone has any baggage animals or carts they can bring along to enhance the look of this scenario it would be greatly appreciated. In the afternoon we will have a bash at a slightly larger battle based on the narrative established in the preceding games. This should (roughly) run between 1300 and 1600 I anticipate.

Having an aide memoire on a single sheet of paper is a great way to speed things up when playing Warhammer. Any stat-lines and rules for your favourite characters and units are handy if available to hand quickly. It is a good idea to have spare paper and a pen on the day so you can make a note of spells and such like, as well as a tape measure and some dice.

Nobody knows exactly whats going to happen in games like these so I work hard to avoid being prescriptive, there will no doubt be a fair bit of improvisation and ad-libbing on the day so prepare for a flexible and fun experience!

Thanks for stopping by!
Posted by Warlord Paul at 04:46 10 comments:

And the winner is...

Woot! The Black Hole hit 100 followers today and in celebration I have selected a name at random (using my trusty D100) and having rolled really low it is one of my more recent additions that claims the prize...

Dustin, congratulations! You now have the time it takes for me to grow bored to get in touch and pass on your details to me in order to claim your prize of one free board game. Clock's ticking! 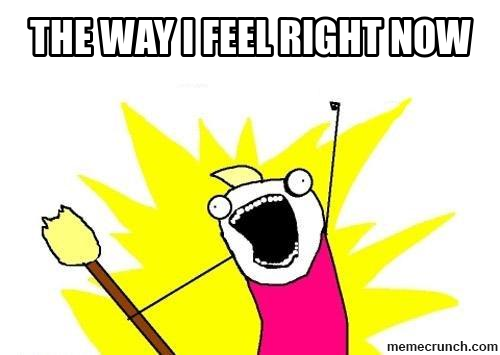 
Bad luck to all my other beloved followers. Unless Dustin takes too darn long and I redraw, the next prize draw is at 200. So you'd best get to telling all your friends what a super awesome guy I am!
Posted by Warlord Paul at 10:13 4 comments:

Illuminati revealed and a prize give away. (Ha, watch the views soar...)

I had a great game on Thursday at the club. It was board game night and one of the hoary old grognards brought along Illuminati by Steve Jackson (the American one I think). It was such a good game. The mechanics are very simple and elegant but inspire so much fun along the way it's amazing. Not sure if it's all that easy to come by or still in print but if it's in your loft somewhere go and rescue it and play immediately. Or put it on ebay for me! The idea is you are a powerful secret organisation and you have to go on and take control of enough of the worlds organisations with your powerbase that you meet your individual victory conditions. 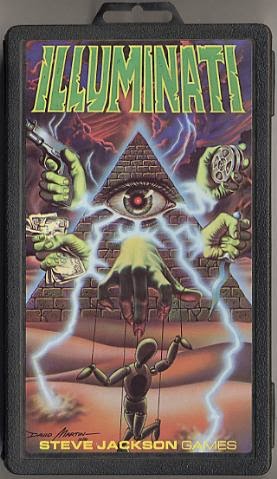 The box art is a classic too, leaving no doubt about the aim of the game.


Easily the biggest hit for a year or so and it inspired us to announce Jackson's Car Wars as next months game.

As I am up to 95 followers I have decided to announce a competition. I won't do one of those typical blog contests that falsely inflate numbers, I'm just not into collecting people, instead I'm just going to draw one of my followers out of the hat when I hit 100 and give them a prize. Can I invite suggestions as to what the prize should be please? As a board game lover I was leaning towards picking up a copy of one I recommend and posting that off, what do you guys think?

You're not getting any of my precious lead, before you ask.

Thanks for stopping by!
Posted by Warlord Paul at 09:20 13 comments: