Month three already, how time flies etc. We have 'a new miniature' arriving in January (by that I mean baby) so I am still concentrating on getting as many of the compulsory rank and file done as possible and staying ahead of the 100 point average. I can then have an easy ride for a couple of months by chucking out a mummy and a carrion.

I struggled to get a decent photo and uploading to the PC was taking forever for some reason (making re-shoots unattractive) but you get the idea. 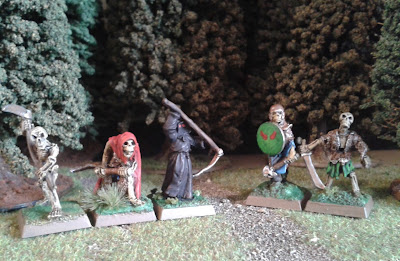 
I had to add in some grass and foliage to some of the bases to cover up problem areas. The polyfilla sunk into a recess here or there while drying and one integral base was too prominent. I think it has worked out ok and I might look into doing more to make sure the units look coherent. I have ten reapers done now so I can put that unit aside, though I may do two more down the line to have three complete ranks of four. One of the reapers has some weird bobbles under the hood for eyes which I'm not sure about looking at the photo. I painted them to look like flashing red eyes but the effect isn't doing it for me, I might change to green or black them out entirely. Though the shield isn't much to shout about this represents progress for me, I have been struggling a great deal with freehand designs and I am actually pleased to have moved from 'terrible' to 'must apply himself more'.

Next month when I have a few more skeletons done I'll do a shot with everything so far.

My scores tally shows Chico and myself joint top with Steve in third place and James bringing up the rear, but of course, as far as bragging rights goes it all hinges on the final battle at Bring Out Your Lead 2016!

Thanks for stopping by!
Posted by Warlord Paul at 04:19 2 comments: