The Oldhammer 'Tale of Four Gamers', month one.

Here we go then, the results of the first month of painting. I'll be honest, I'm posting these now because the deadline is today rather than because I had an easy run this month and highlighted them to the Nth degree. I'm pretty happy with the time/results ratio though.

I fell in love with all of them bar one during painting, as I usually do with the older metal minis. The fellow on the far left of the picture is a post 4th edition monstrosity if memory serves and I had a tough time painting it I won't lie. Now it's done I kind of like it again, at least as much as when I first grabbed it off the slopes of lead mountain.

The outline when we started our Tale of Four Gamers was simple, get 100 points painted a month (no more no less) and show them with a minimum of one blog post per month. At the end of the first month I reckon it is worth keeping a simple points tally to keep things interesting. For that to work I just need to add in a clause that allows for a plus or minus of 5% of the points value, thereby accommodating the vagaries of Warhammer Armies, RoC etc. This leaves two points each month up for grabs with bonus points possible in the future.

Chico did well this month and I scraped in with a few hours to spare so we both get 2 points each. James didn't finish his palanquin as far as I know but he did blog regularly about his progress so he gets a point. Steve was well under the points total but he didn't know about the +/- 5% rule so I'll let him off this once. Having blogged about the progress and results he scores 2 points.

The standings then, in no particular order.

This month we will follow the same format, here's my 100 points. 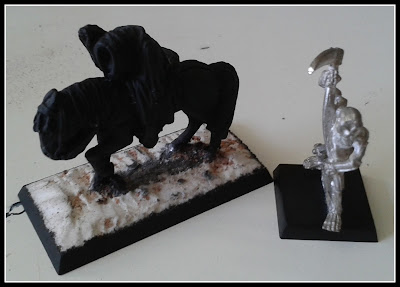 An 85 point necromancer L10 and another 14 point Reaper (to make 8/10 complete). A necromancer is the only general I can afford (unless we mix things up with a bonus round one month) and having a general is compulsory so this choice was made for me. The sooner I get the reapers done the sooner I can move on to some cheaper skeletons. EDIT I haven't paid the 10 points for the horse, I'll have to rejig things... probably a skeleton instead of the Reaper. EDIT Having spoken to the other entrants and listened to their plaintive cries for mercy, it will be permitted to divide the points total of 1000 up any way you see fit.

Thanks for stopping by!
Posted by Warlord Paul at 09:17 6 comments:

A Tale of Four Oldhammerers.

Hi all, been meaning to post for ages but life happened and stuff. I have a tactica centered around what went on at BOYL (the games, not the after-hours stuff, that stays secret I'm afraid) almost ready to go and a whole bunch of updates for my two D&D parties to polish and publish but this life thing, it just won't stop!

As you may already be aware from Chico's and James' blog posts, four of us have banded together to replicate the ever-popular and not-yet-done-to-death formula of 'A Tale of Four Gamers'. James of Realm of Chaos 80s, Chico of Oldhammer on a Budget, Steve of Eldritch Epistles and myself will each collect a Warhammer (fantasy 3e) army of up to 1000 points to be used at BOYL 2016.

Each month we must paint up 100 points and blog at least once about it. No doubt an extra challenge or two (play a game, add a bonus mini etc.) will spice things up as we go along!

Though Steve has yet to post I know he has chosen Slann. Chico picked Hobgoblins and James went for Chaos/Nurgle. I have chosen to do the mighty Undead! I'll be using the venerable Warhammer Armies as my guide. 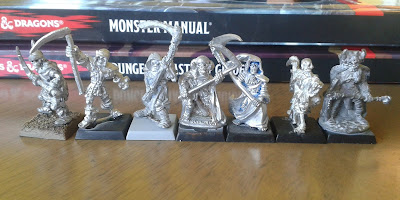 From the slopes of lead mountain, 7/10 of my compulsory Grim Reapers.


A somewhat motley mix of minis and each one an individual, as is my preference. Equipped with light armour they cost 14 points each so 7 weigh in at 98 points; close enough. I'll concentrate on the compulsory troops while morale is high and try to blast out 10 reapers and 20 skellies as quickly as possible, then reward myself with a general and a (mwahaha) war machine. Christmas to me means Screaming Skulls raining down on my foes.

I have a bit more prep to do but hopefully I'll be back soon with an update on the painting progress.

Before I go, I must mention a very cool project from a friend of mine. Please take a look at the excellent sci-fi mini Kickstarter campaign from Chris at Macrocosm. The total is smashed after less than a week but there are a bunch of lavish stretch goals to aim for now. It is payday after all! Macrocosm: The Next Races.

Thanks for stopping by!
Posted by Warlord Paul at 10:03 14 comments: