Mum-Ho-Thep and the Floating Ziggurat of Doom. The WFB3e scenario for Blog-Con 2013.

Below is the narrative and scenario details for the Warhammer 3rd edition table at Blog-Con 2013. Not only that, this is my 100th post! Woot!


Mum-Ho-Thep and the Floating Ziggurat of Doom. Blog-Con 2013 (9th of November).

The Ziggurat glided silently onward to the next locus point of Mum-Ho-Thep’s scattered realm. It looked as though beams of pure magic had carved it away from a more natural resting place. The living rock, from which the main temple itself had been carved in a distant era, was tortured and twisted. A lone Skeleton sentry stood, immobile, staring out towards the horizon. It would easily be mistaken for a statue, were it not for the tattered rags flapping about the shoulders. The skull turned very slightly, almost imperceptibly. It looked out to the north where a smudge had appeared at the edge of perception. Was it a cloud bank? Fog? What was that rising from it, a wisp of smoke? No. It was a banner. The smudge was an army and it was closing fast! As soon as the mindless automaton had seen the forces of Chaos the image was transmitted to the Liche, Korvun. He had been poring over an ancient map that depicted this place as it would have been 4000 years ago but now he looked up from his chart table and sent out an urgent thought to his minions. “Prepare the ritual, activate the Array, summon the Guardians! We must awaken the Master and crush these interlopers!”

Inside his sarcophagus, Mum-Ho-Thep began to stir for the first time in centuries…

The Floating Ziggurat of Mum-Ho-Thep is an ancient Slann device, an engine of great power that resides atop a prehistoric temple. Nobody remembers now what the device was intended for but at some point it was captured from the Old Ones by the immeasurably old and powerful human sorcerer, Mum-Ho-Thep. Those rare books that mention him at all say that he was born into an age of stone with the ability to see and manipulate the winds of magic when most of his peers had little more than fire, flint and spear to wield. He was able to command mighty spells many centuries before the Elves deigned to teach magic to mankind leading some scholars to compare him to the terrible Drachenfels himself. He is said to have led a rebellion against the Slann and wrested control of the temple in a bitter struggle, magic flashing in the sky and men and Slann alike falling dead without a mark on them. Once inside and in control of the temple, Mum-Ho-Thep activated the Array which caused the earth itself to buck and heave as the temple was torn from the land and the Floating Ziggurat was created. At first, Mum-Ho-Thep was able to guide his new fortress anywhere he wished, as well as gliding sedately across the face of the world the Array allowed the entire structure to disappear and reappear anywhere on the planet, but as the millennia passed he took to spending more and more time in his regenerating sarcophagus while the operation of the Array became a lost art to his servants. As his living army dwindled to be replaced by skeletal warriors by necromantic means the Ziggurat settled into a pattern of visiting a set number of previous destinations, the loci. Now, the Ziggurat wanders along this route over and over. It floats for miles before winking out of existence and reappearing at the next locus point to continue the journey. This route is the realm of Mum-Ho-Thep, those who live along it see him as a benevolent God-King and offer up tribute at his passing. There are always those who try to expand their borders into this realm but eventually, the Ziggurat returns and the Undead armies of Mum-Ho-Thep take a cruel revenge on the usurpers, often with the aid of local forces who have worshiped their God-King for generations. 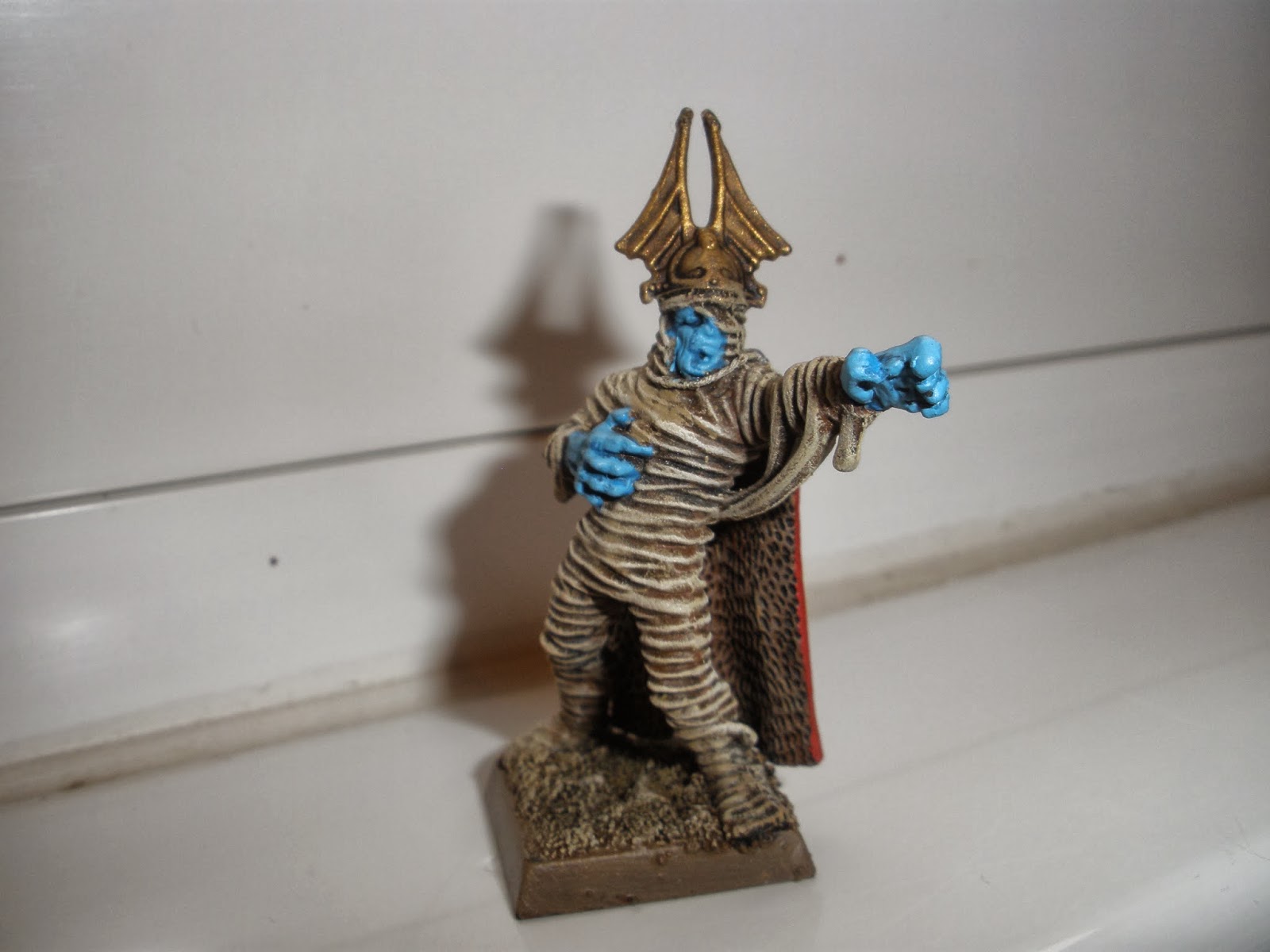 Read Part One of the Battle Report.

What you need to bring if you're joining in on Saturday the 9th of November.

First off, let me distinguish between the two groups of people taking part. Many people have expressed an interest in stopping by the Warhammer 3rd edition table to say hi and roll a few dice, you will be made very welcome and as casual participants none of the following need apply to you.

For those hardcore retro-gamers out there who are bringing miniatures along and will be staying to play the entire game on the Saturday (and coming out for a post game beer afterwards hopefully!), listen in. I have based the scenario around Orlygg's Chaos army clashing against a mish-mash force of Mum-Ho-Thep's servants and allies. I know several of those attending will be bringing some Undead, and these will form the core of Mum-Ho-Thep's army while any Chaos stuff you guys bring can ally with either side as appropriate. Extras like Lenihan/Robotforaday's Fimir will be added to Mum-Ho-Thep's force too. I will have a mixture of metal and plastic Undead as well as a few Chaos units to help balance out either side if necessary. Whatever minis you want to bring can be fitted in and will be very welcome indeed.

To speed things up on the day it would be a very good idea indeed to have an aide memoire sheet with all your stats/rules on one page, a number of movement trays, a tape measure and don't forget to bring a handful of dice! Orlygg and I provided all this for the RoC game at the BOYL weekend but with so many people sharing it all the game was slowed down quite a bit.

If there are any questions at all, just contact me in your preferred way and I will get back to you asap.