Month two results of the oldhammer 'A Tale of Four Gamers' project.

Interesting project this week, and by interesting I mean in the Chinese sense. A black-robed rider on a black horse. In the past I would have cheated and painted the robes green (I paint everything green) or possibly highlighted them with navy blue or a faded grey. I wanted to stick with black though, so I could double up the uses of the miniature (for those perennial Lord of the Rings scenarios), and I also had the fatal thought 'let's try something new'. Hmmph. 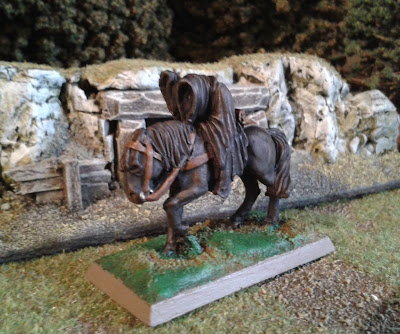 I actually spent a lot of time on this miniature, believe it or not. Once I'd had the foolish thought that having a whole month to paint only one model would mean a great opportunity to experiment I was lost. To begin with, I sprayed it black, painted it brown, highlighted through light brown to cream then built up a series of dark ink layers. I had toyed with the idea of drybrushing some white over the cream but decided against it on a hunch.

Eventually I was left with something that looked ok but wasn't matching photos of black horses or other images online. I also had to come up with a way to matt down the shiny finish of the inks.

This stage was a windy maze of research, instinct and pure chance.

The glossy finish of the inks was in the recesses so shading removed that. I took the horseflesh off toward brown and the horse hair back to black, as per the photos I found. I note with chagrin that you can't really tell from looking at the photo of the mini. I sent the robe very gently toward grey to stop it from looking like an extension of the horse. I highlighted the tack quite a bit thinking that I needed something on the mini to pop; but it really didn't look at all right so at the last minute I painted over it and simplified it.

What I have invented, is a technique that completely disguises hours of work and looks like a subtle, five minute drybrush. I call it, 'Warlording' and I give it to the world as my legacy.

This model will be my level 15 necromancer and general, Naugrim Griefblight. I like an occasional pun but much prefer Dickensian levels of portent in a villain's name. With the addition of an undead steed and magic tattoos he comes to 168 points. After some discussion we decided we could go over the 100 point target occasionally to allow for some discretion but we would stick to the 1000 point total.

I'm now in the market for an identical model by the way, I'm going to paint it green and exorcise a lingering resentment.