Part one of the review.

Part two of the review.

Welcome to the table tour! Wargames Foundry welcomes people who want to drop in and have games so if you are able to visit Nottingham easily get in touch with them via their website which has a telephone number displayed on it. It's also a great place to hold a get-together. Those of you going to Blog-Con may be interested to see a few new tables the guys have put together since your recce mission. 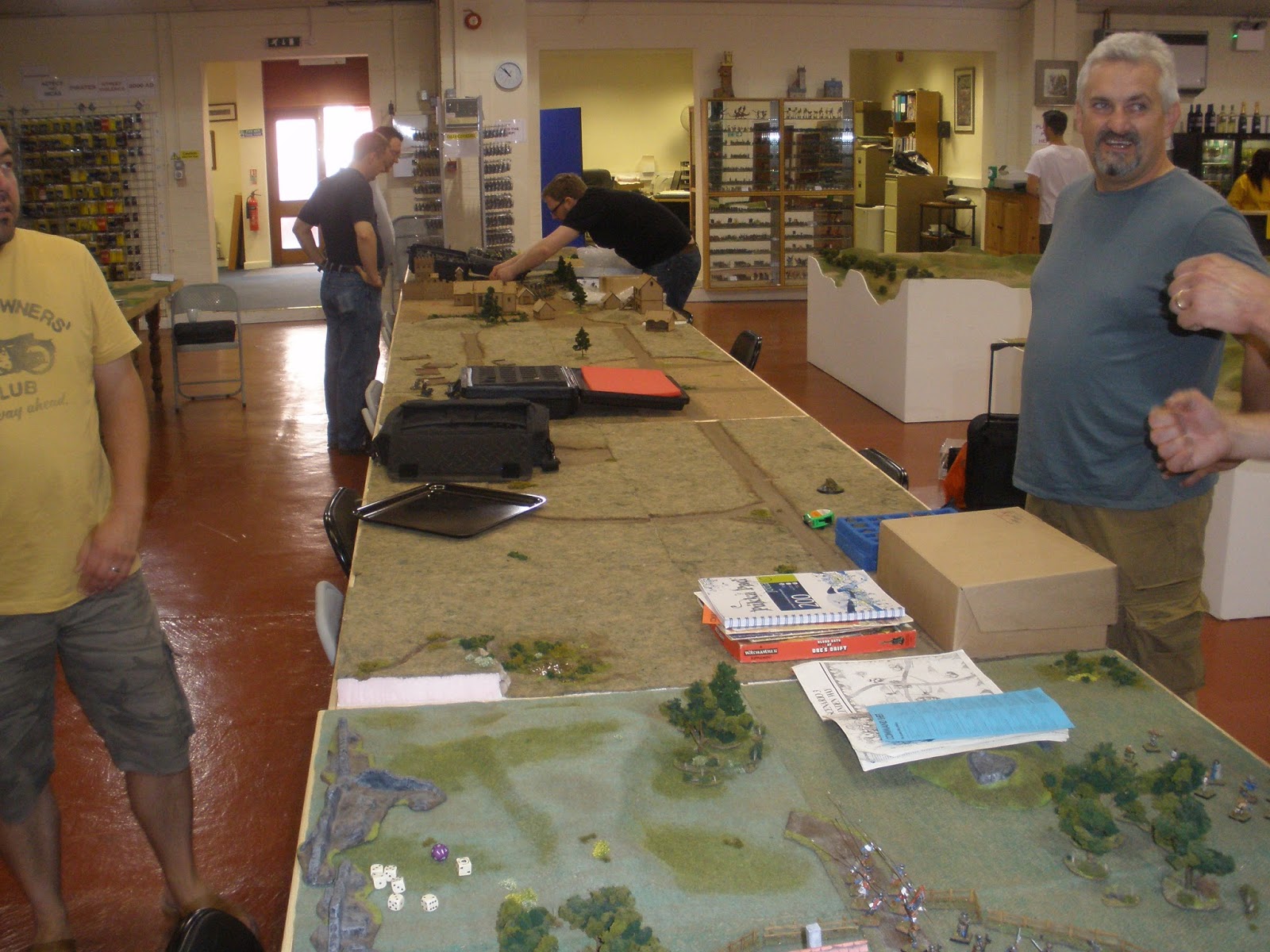 Several blogging legends in this snap, I dare not unmask them just in case! This is a row of newly constructed tables built especially for the busy, upcoming period of scheduled events at Foundry. Right at the opposite end of the tables is a rack of Oldhammer minis cast up especially for the day! The table closest is the one we used for Orc's Drift (with Thantsants' excellent terrain), see part two for more details on that one. 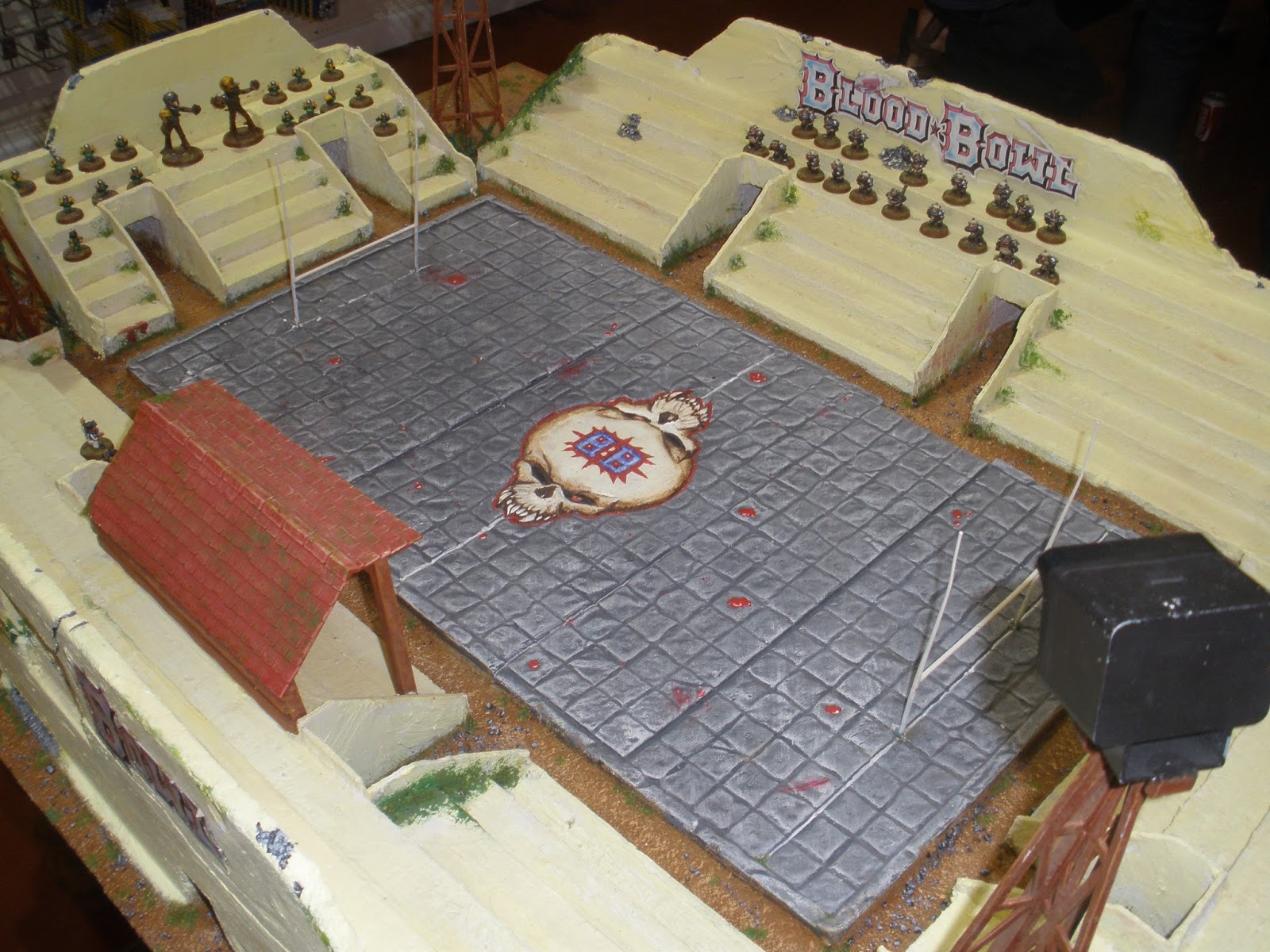 This is Harry's amazing Blood Bowl stadium which saw plenty of action over the weekend. 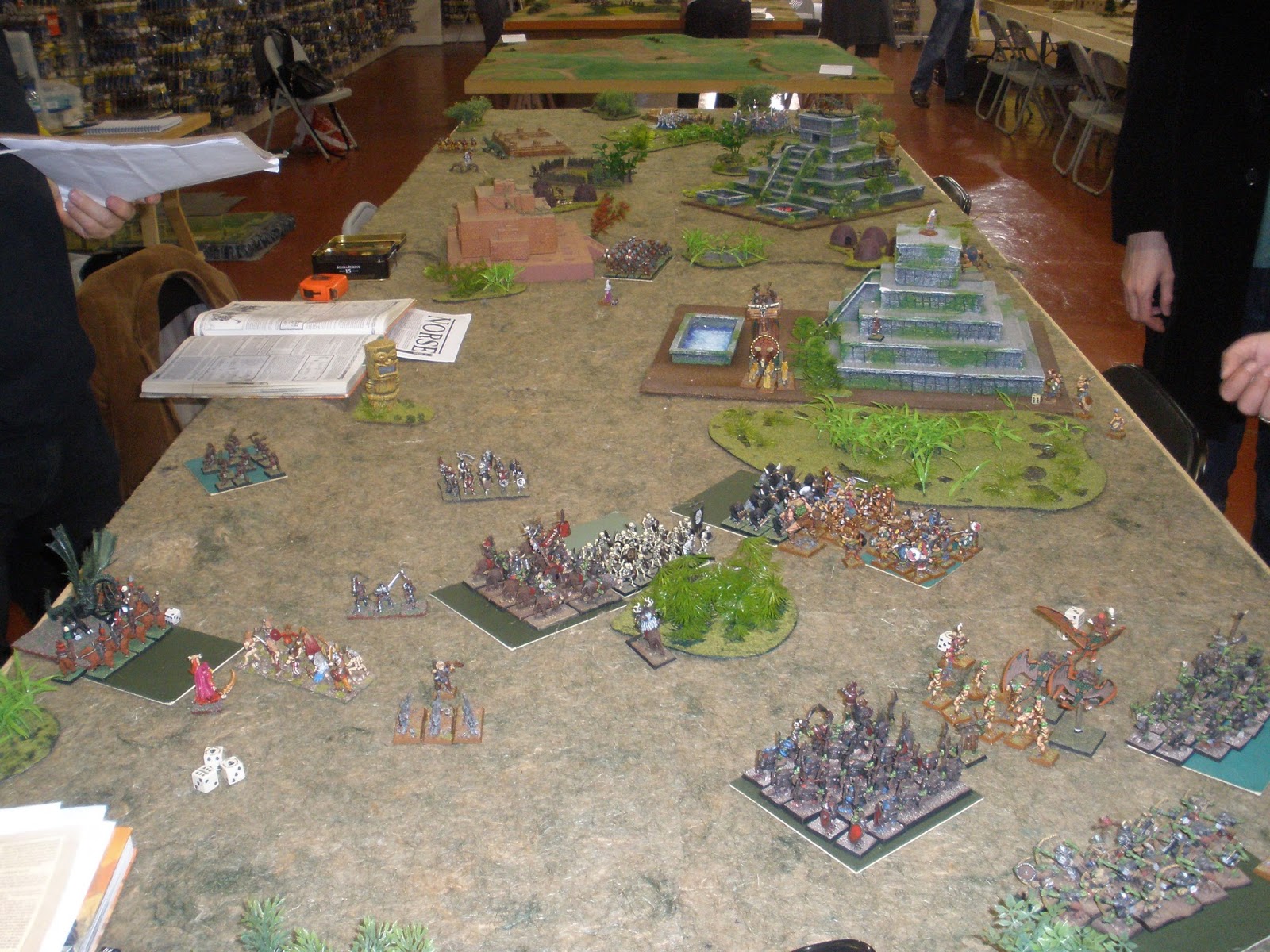 This is the big table used for the 'Rumble in the Jungle' game organised by Padre. This game was huge (and impressive) and took up nearly the entire weekend! 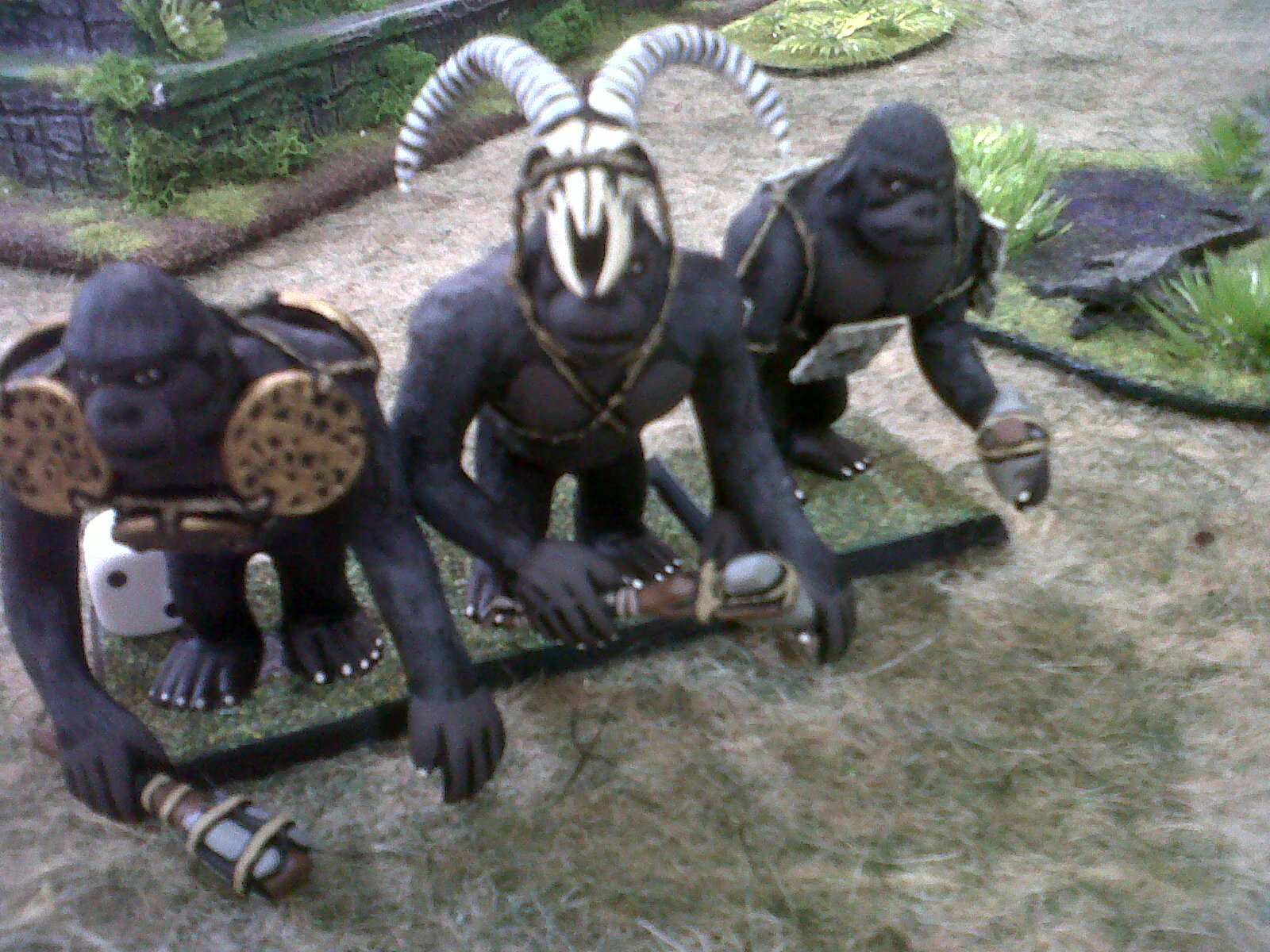 There were several exotic units included in Padre's game, as well as the usual Lustrian suspects. I absolutely loved this armoured War-Gorilla unit! 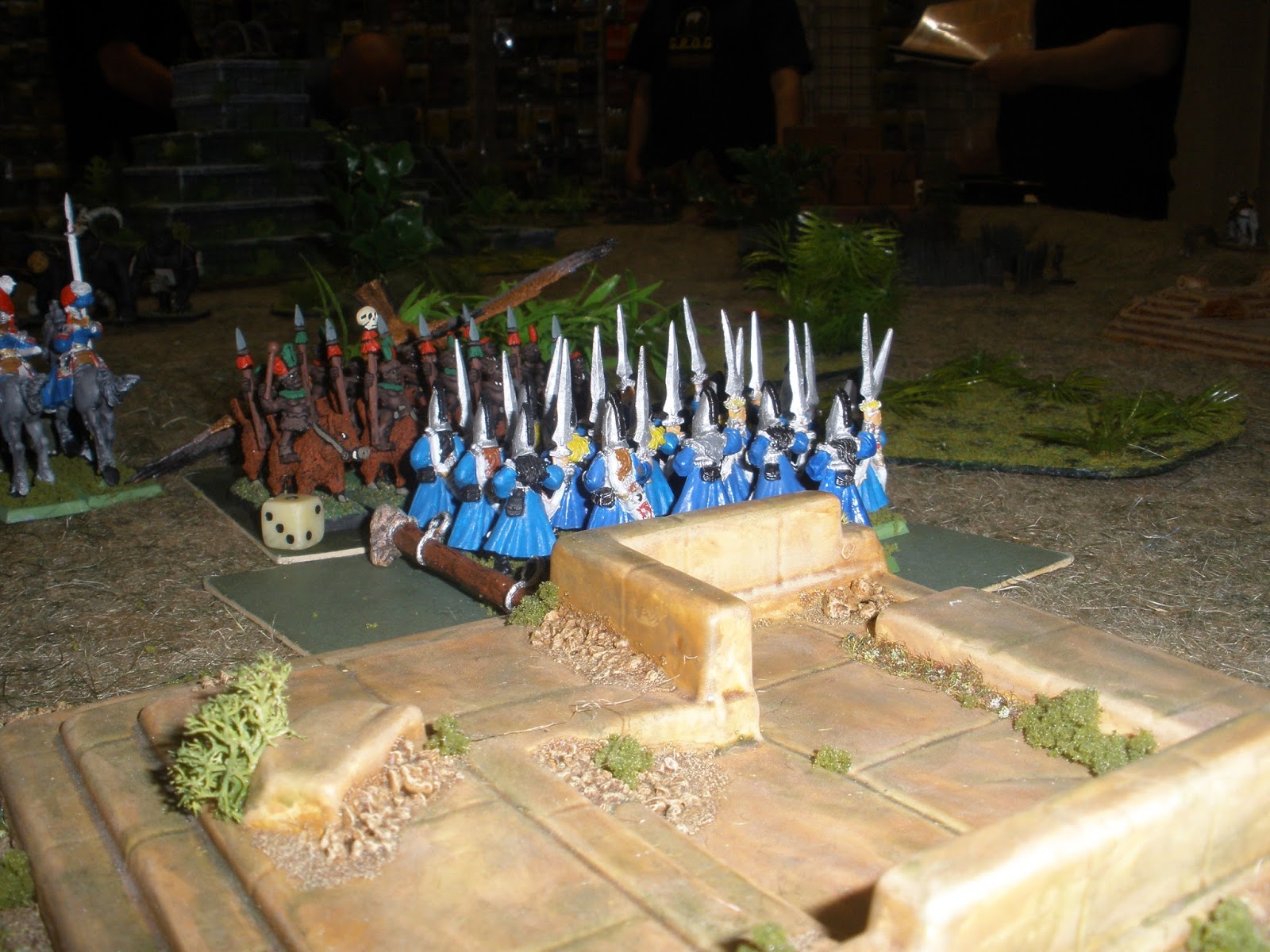 All the exploring armies had to loot the many temples dotted about (note the siege equipment the Elves are carrying) in order to achieve their objectives. 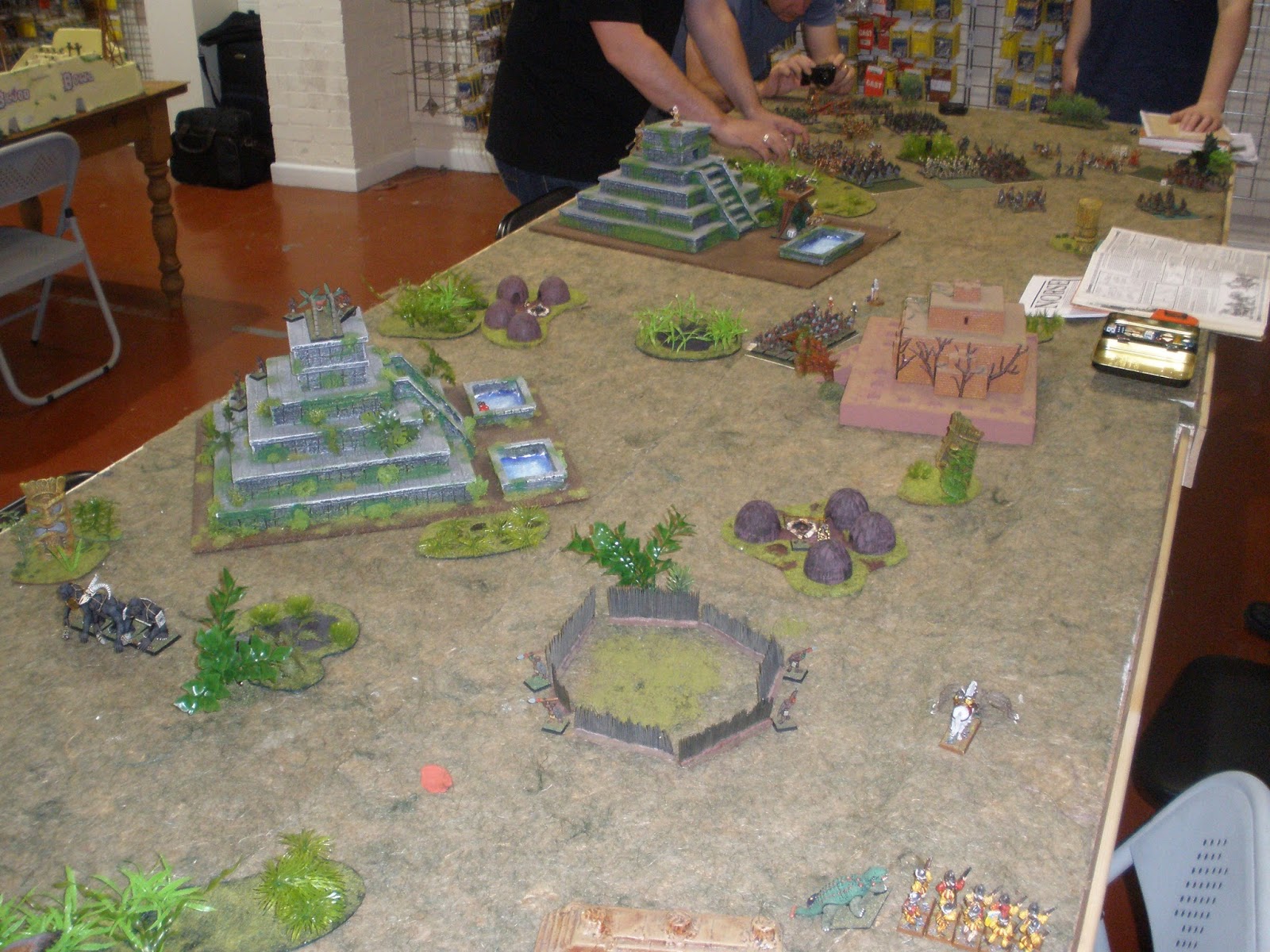 Random encounters and refereed madness was the order of the day in this fine example of the almost lost art of GM'd Warhammer. 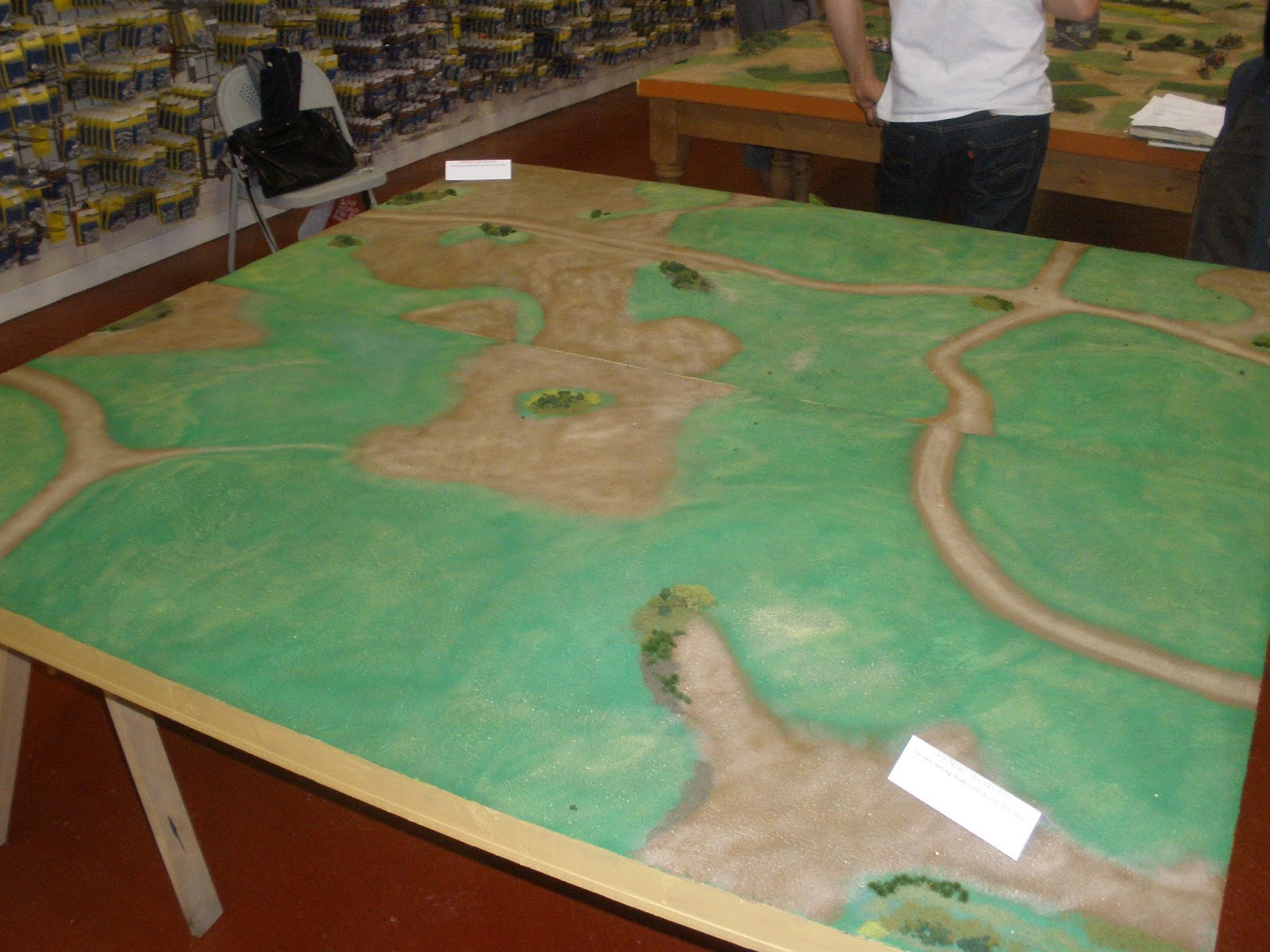 One of the stand alone tables available. Beware the temptation of playing wargames so close to racks of lovely minis! That's the board used for the Realm of Chaos games behind it, see part one for more detail on that. 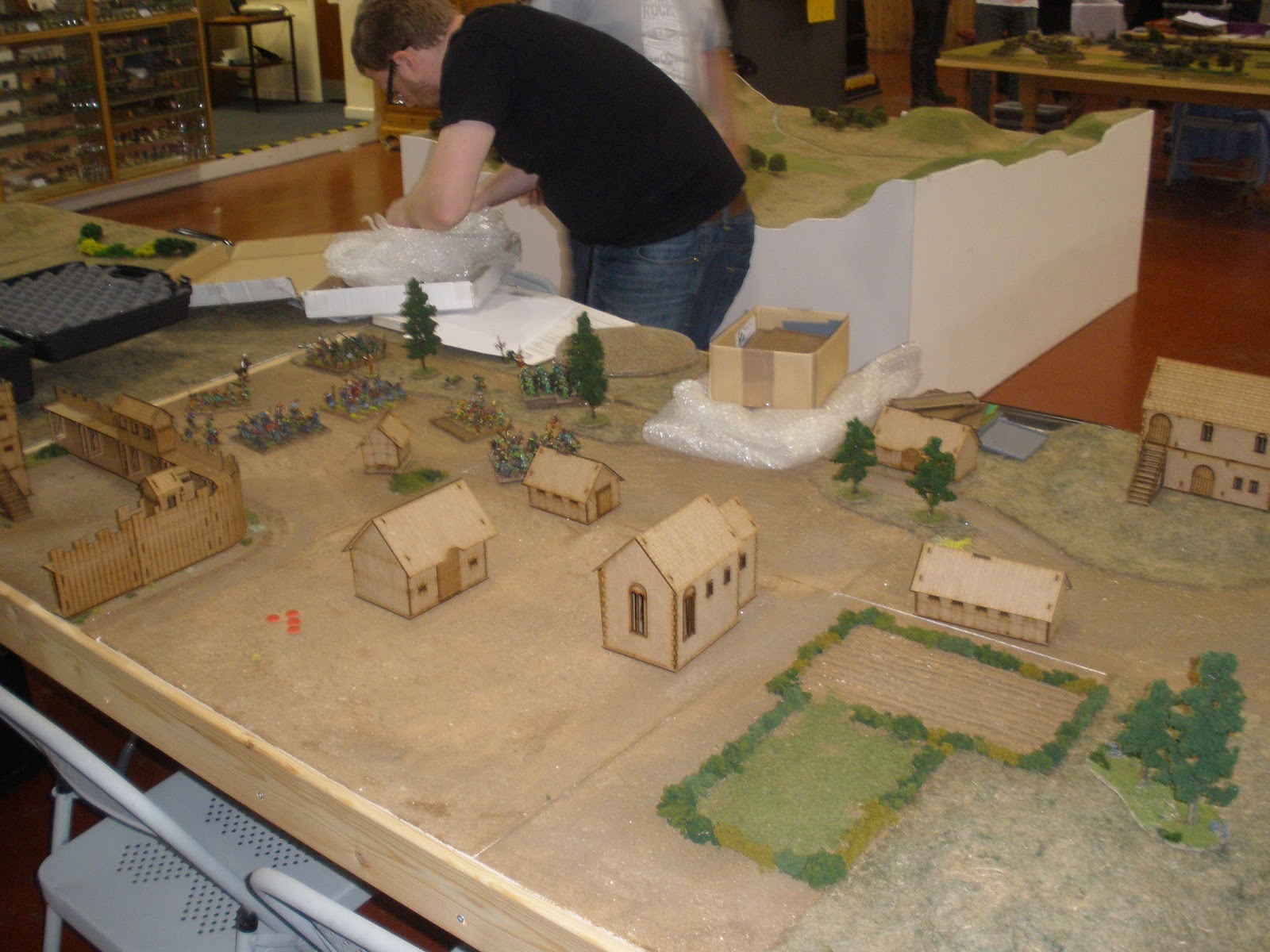 There was a lot of LASER-cut MDF scenery available for use and you can see some of it here. I'm not sure who brought it to be honest but I know the Foundry has some terrain available. This battlefield is one of the big, connected row of tables depicted in the first photo. 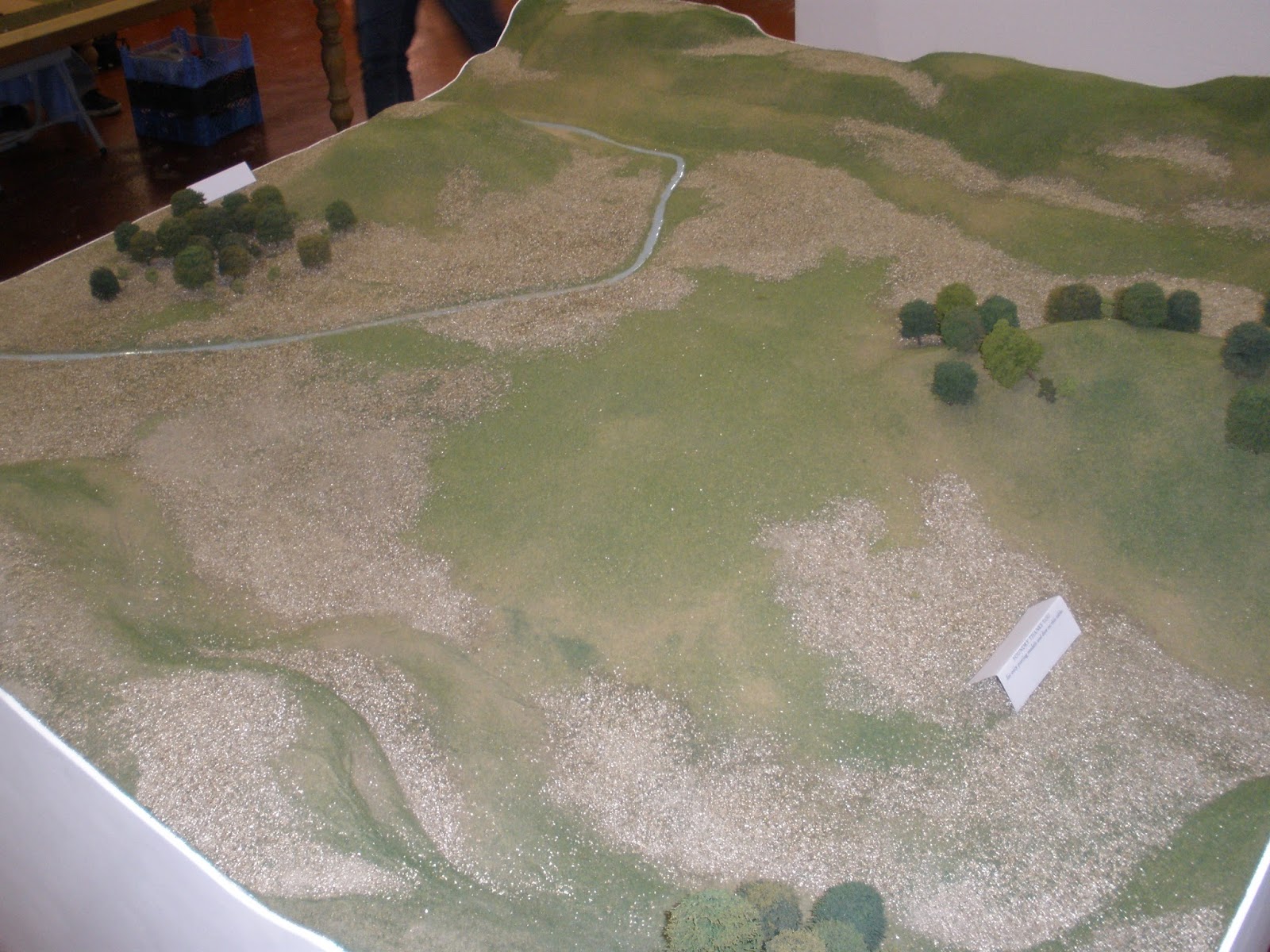 This is one of the tables built for the British TV program 'Midsomer Murders'. Two of them stand on enclosed boxes and are tricky to lean over because you can't get your toes under them, but this one is worth the effort, it's quite lovely. 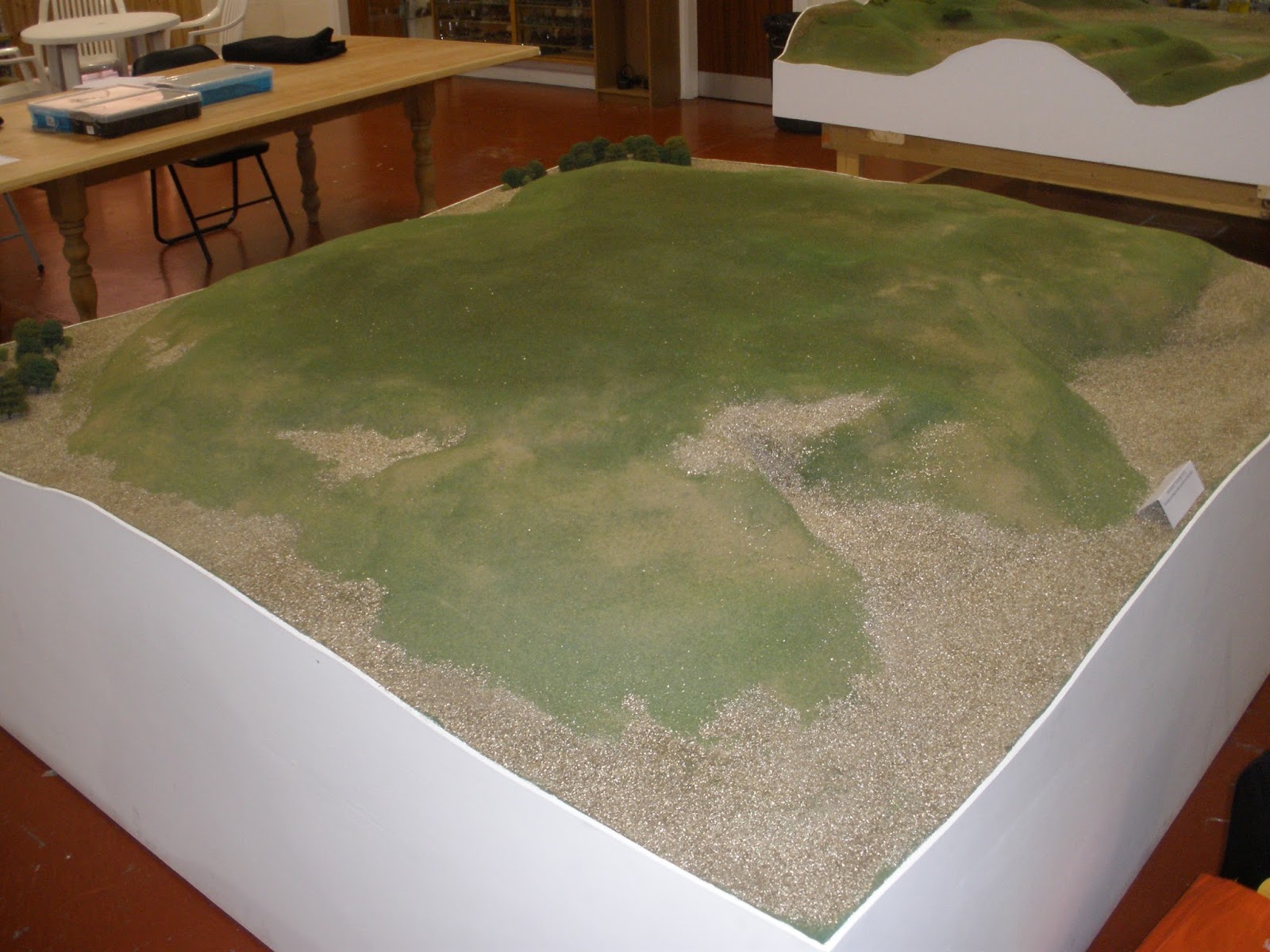 This is the second table on an enclosed box, the problems are exacerbated by the unusable nature of the first foot of board all the way around and it's not quite as attractive as the other one. It would be OK for a game of Saga in one of the corners though. 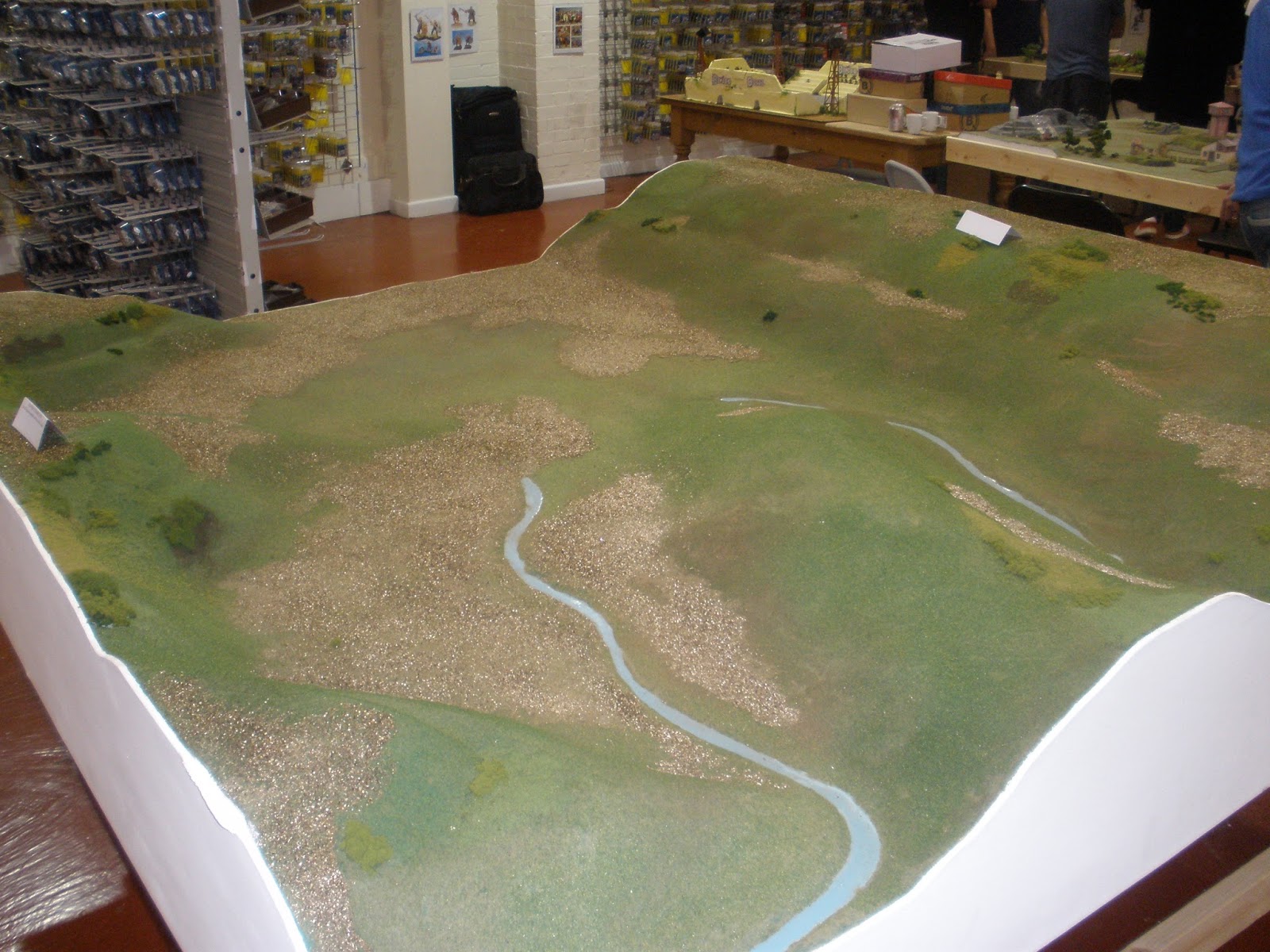 This one you can get your feet under and is also my favourite of the three. Hoping to get a game in on this one next time I'm down! 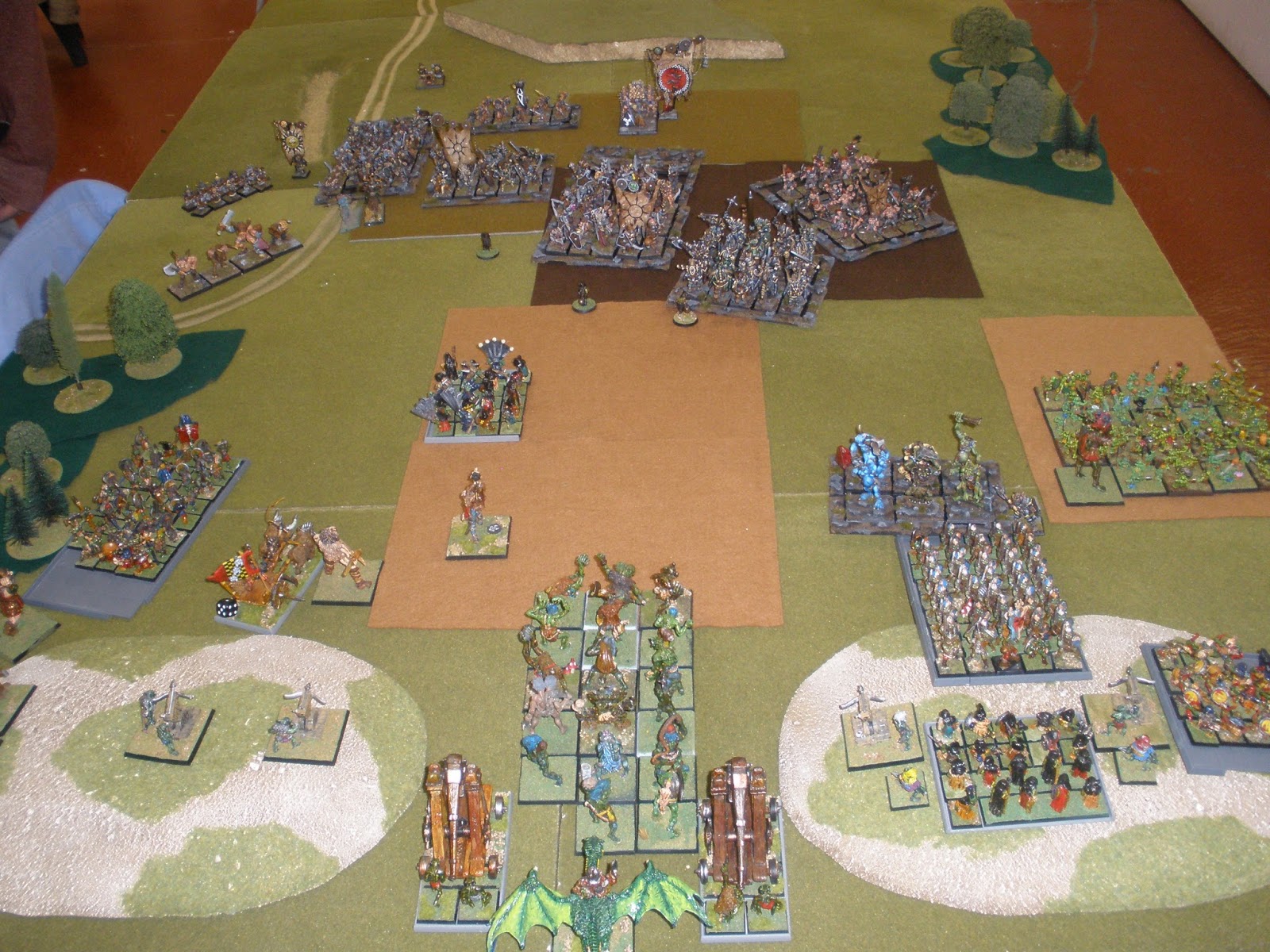 There was one more table in use, quite a large one too. There were reputedly 18000 points (3rd edition Warhammer) of troops in this game alone. Most people agreed that Nico, one of the participants, had the most drool-worthy army of the weekend. Golgfag's army was a stunning sight too though and full of classic lead. 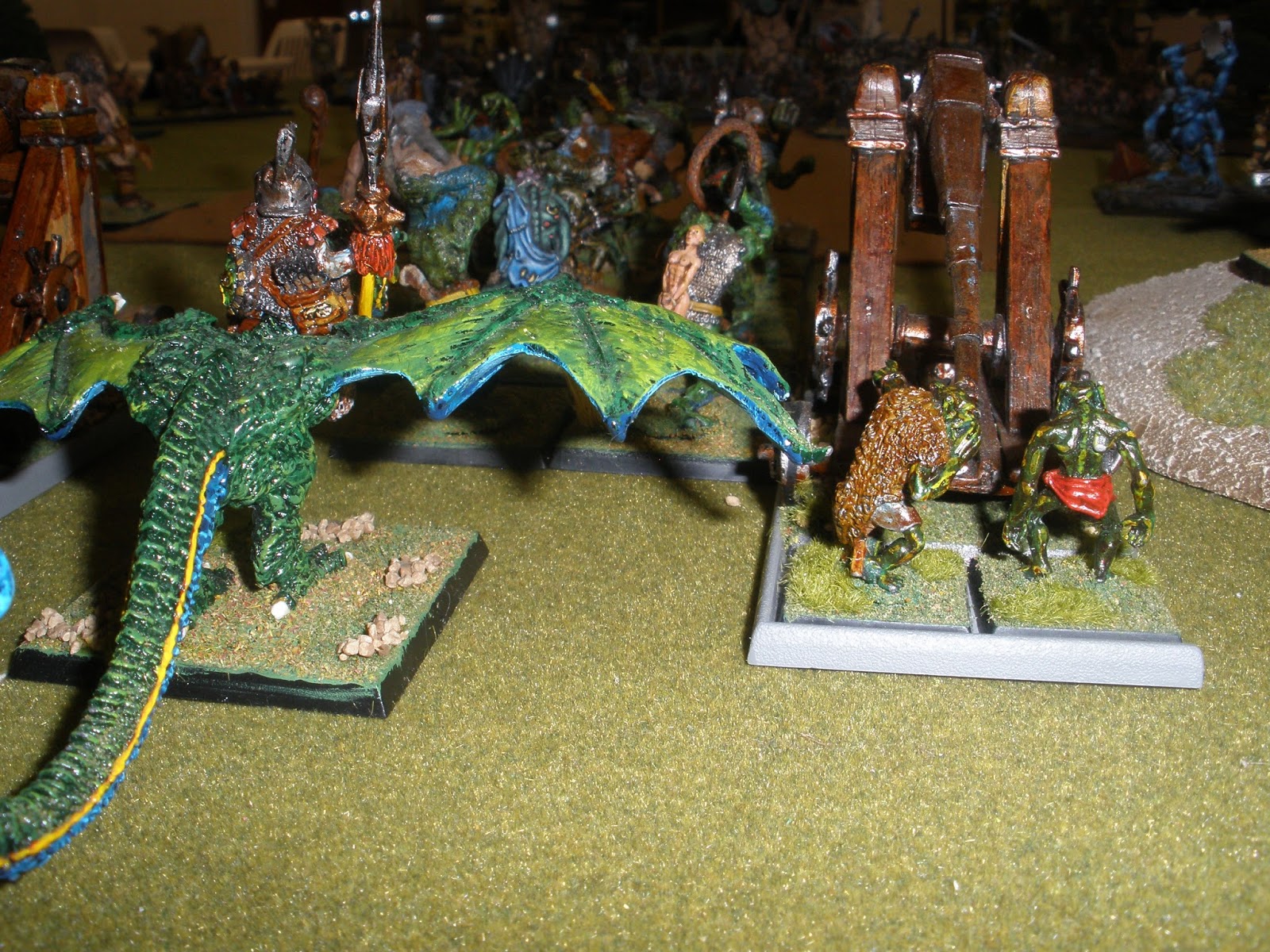 I love this action shot of Golgfag's Orc General exhorting his rock lobber to fire faster while simultaneously goading the Trolls forward!


One more to go, the cabinet tour.

Thanks for stopping by!
Posted by Warlord Paul at 06:58