The Blackwold Road, Part One.

I have a WHFB3 battle report for you today. I don't want to introduce every report I do by apologising for any technical deficiencies or half-finished paint-jobs, so it suffices to say that you will be seeing things improve gradually in the coming months as things get done.Really it comes down to the fact that I want to evolve the battle reports rather than wait forever to get everything perfect first time. With a new nipper on the way getting permission to buy new camera equipment was a surprisingly easy sell to SHE.

If any of you have advice about putting in textured backgrounds during a fun game with friends while managing to not turn it into a full-on photo-shoot then feel free to let me know. I have also seen people do all sorts of sexy stuff in post-production, if you want to recommend a program for that let me know please.

For this game I selected an adventurer party of four characters and pitted them against two Orc characters backed up by six minions. There was also the obligatory GM monster to shake things up a bit. All the characters (both Human and Orc) were level 5, but we rolled up random stat line bonuses as per page 91 of the rulebook. Well, I am practising for a Realm of Chaos event!

We ignored unit restraints in favour of a more 'skirmishy' freedom and concentrated on the movement, combat and magic rules. One or two GM changes were made along the way, for instance I allowed cure light wounds to be cast into combat and from a short distance away. 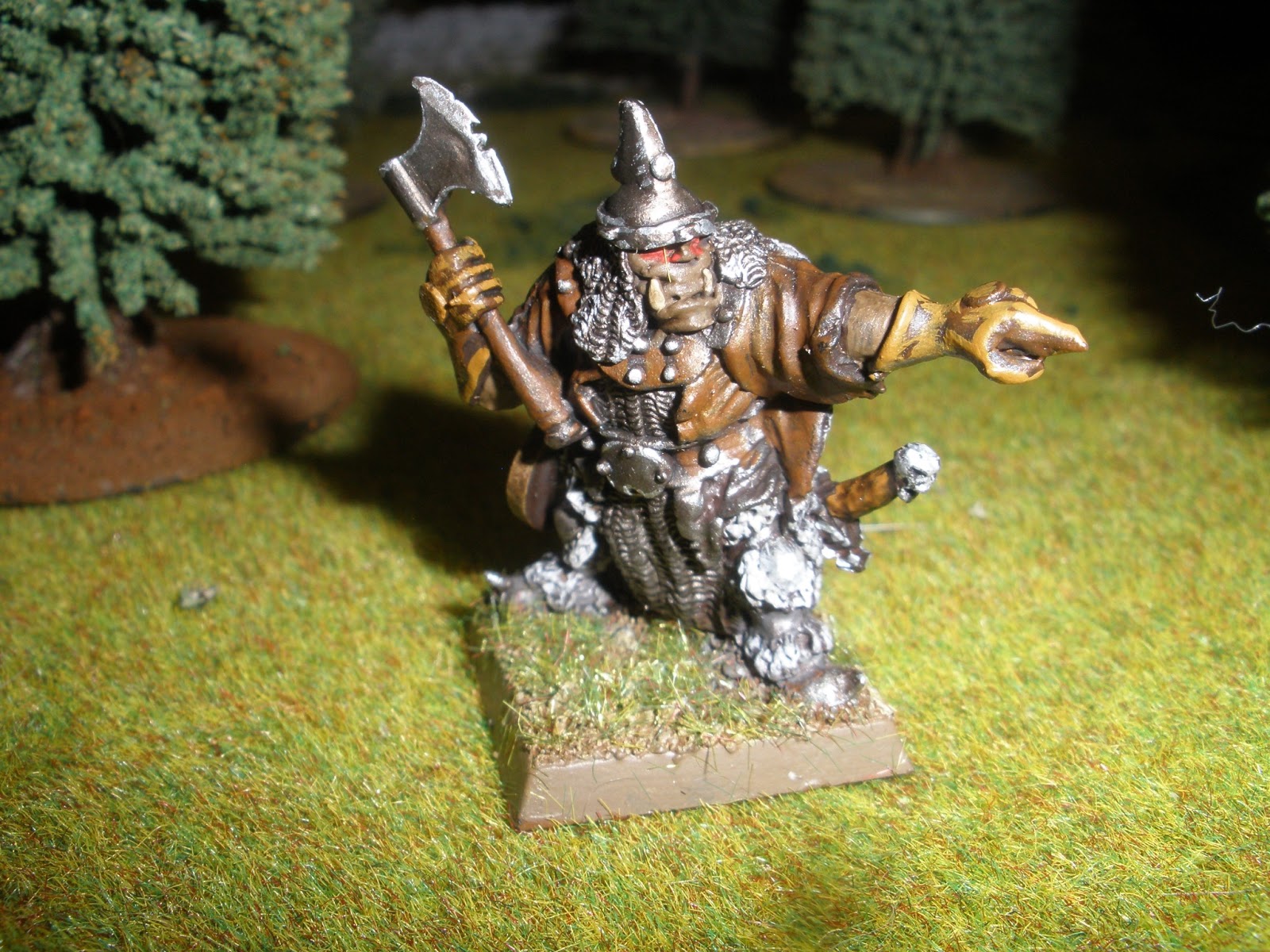 Urklasch the Irredeemable, Leader of the Orc warband. 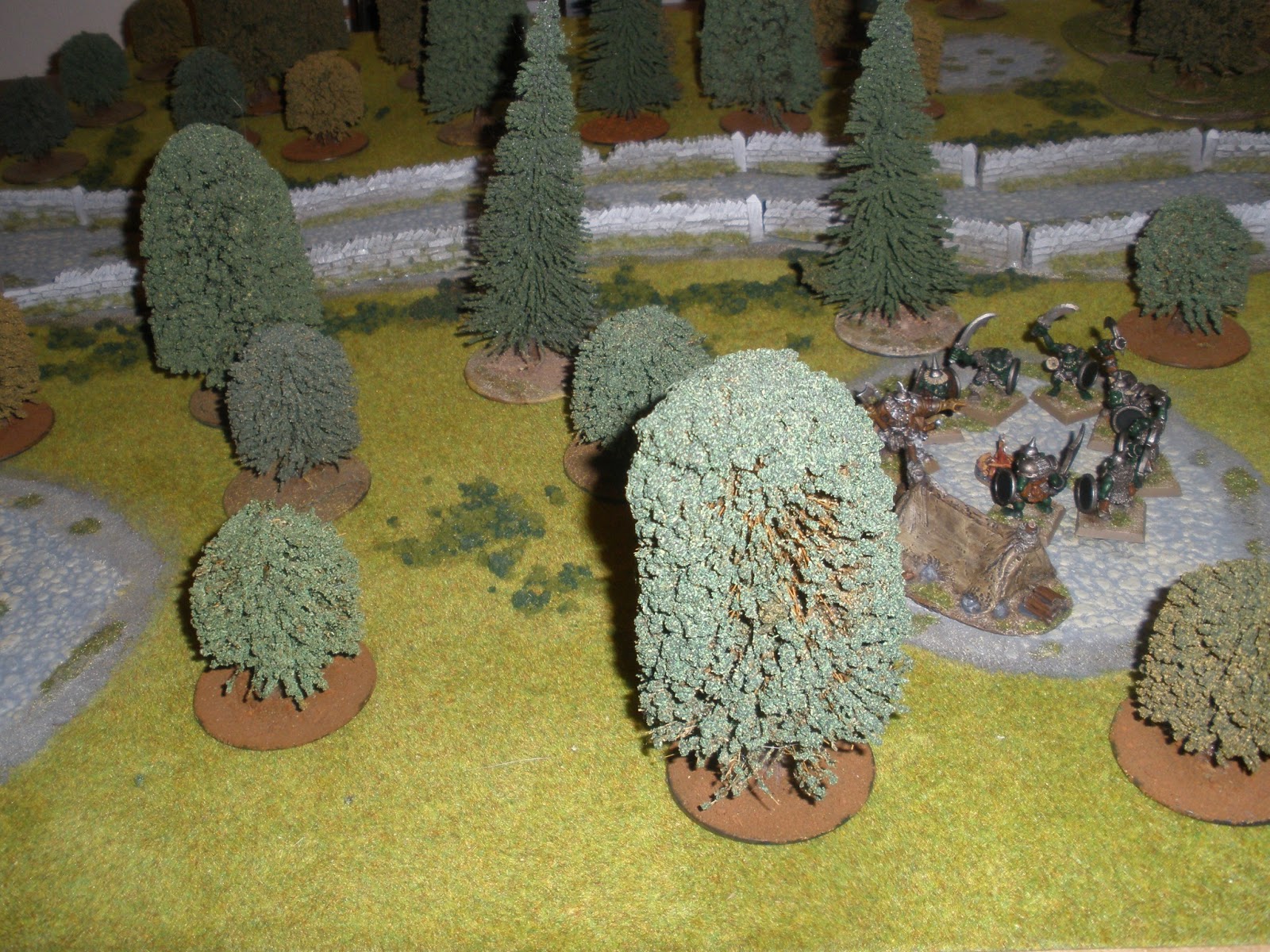 The Orc camp is in the overgrown ruins of Kamalz, inside the Blackwold Forest which is famous for its abundance of Linden trees with only the occasional pine. 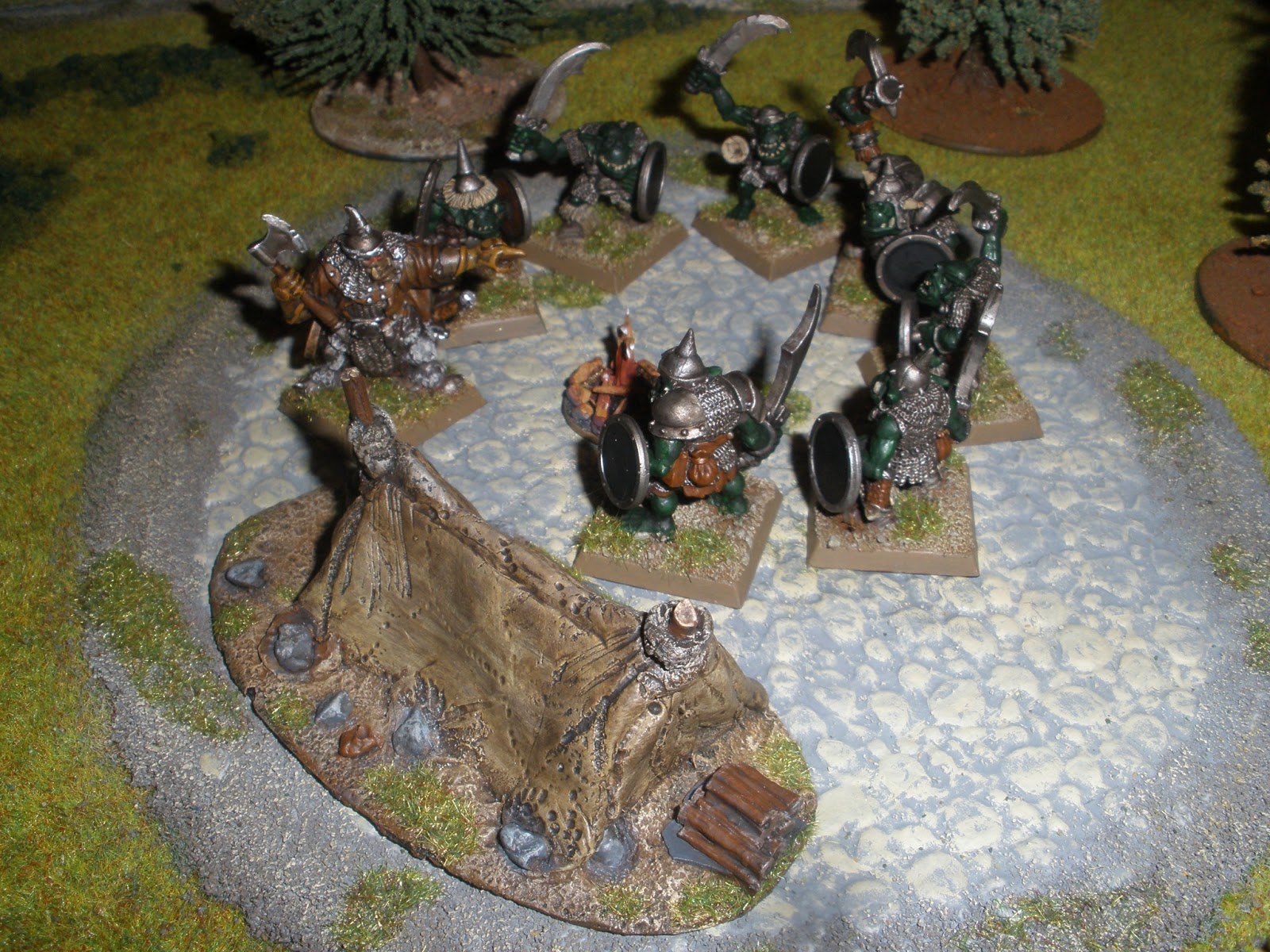 Urklasch and the ladz squabble good-naturedly over a bit of roast merchant. Urklasch's champion, Grognomma wanted the liver, but Hakkr the Horn-blower has touched it and put it back. 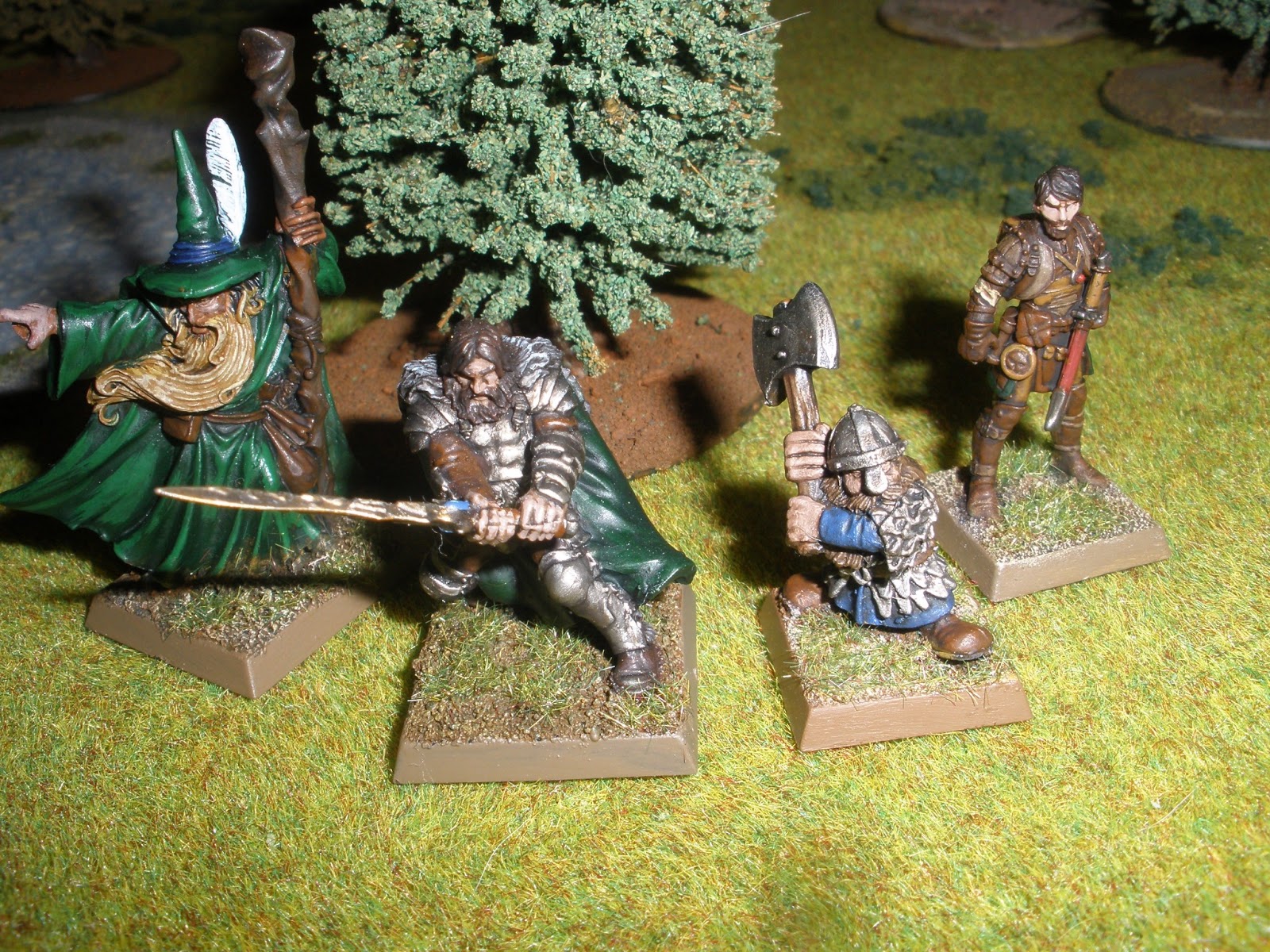 Our doughty adventurers, approaching from the opposite corner of the Blackwold Forest. Left to right, Lazurus, Saul, Toin and Fingers. 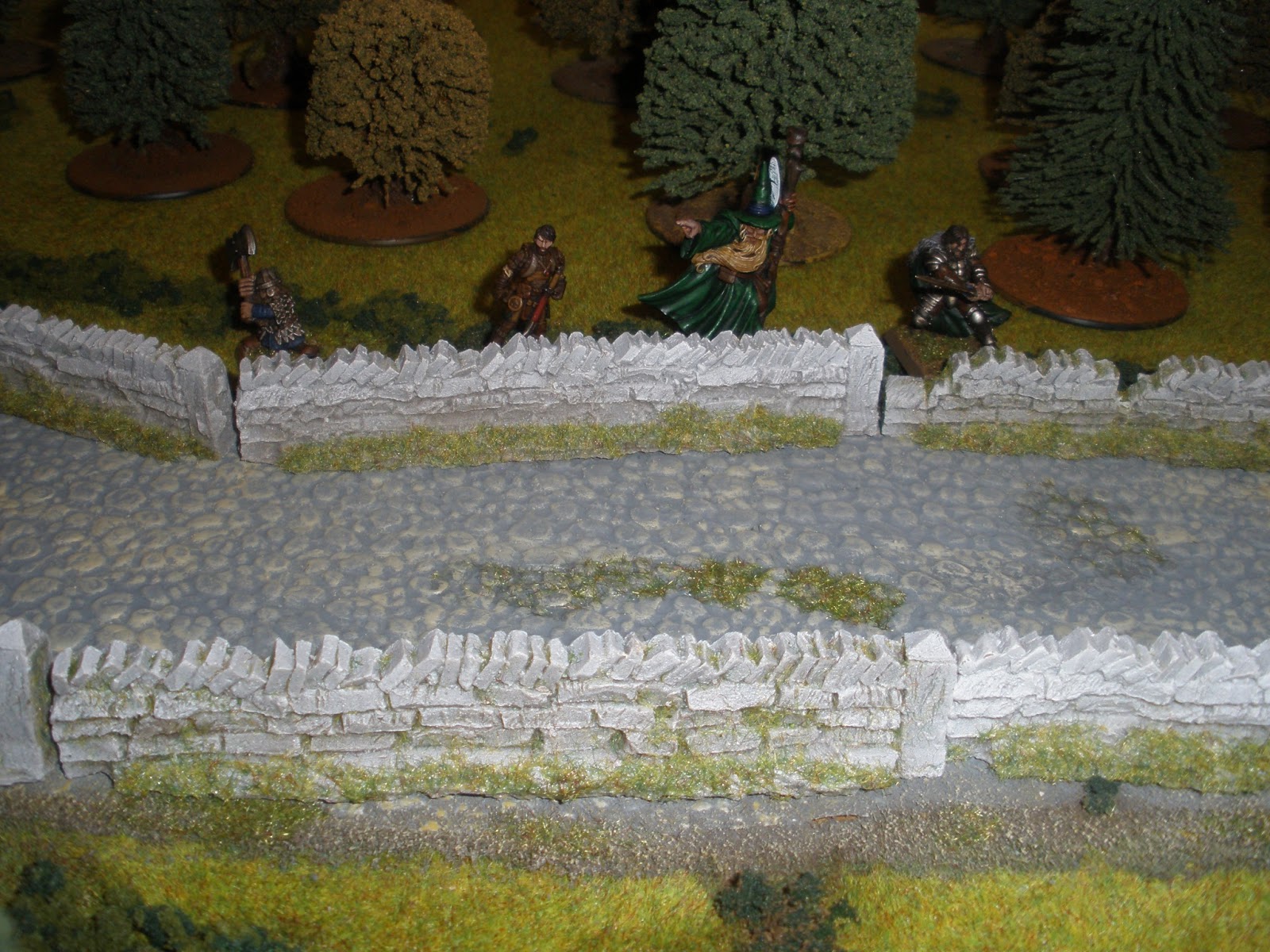 The chaps are able to make it up to the road without being detected, thanks to some appalling stat checks by the 'festive' Orcs. 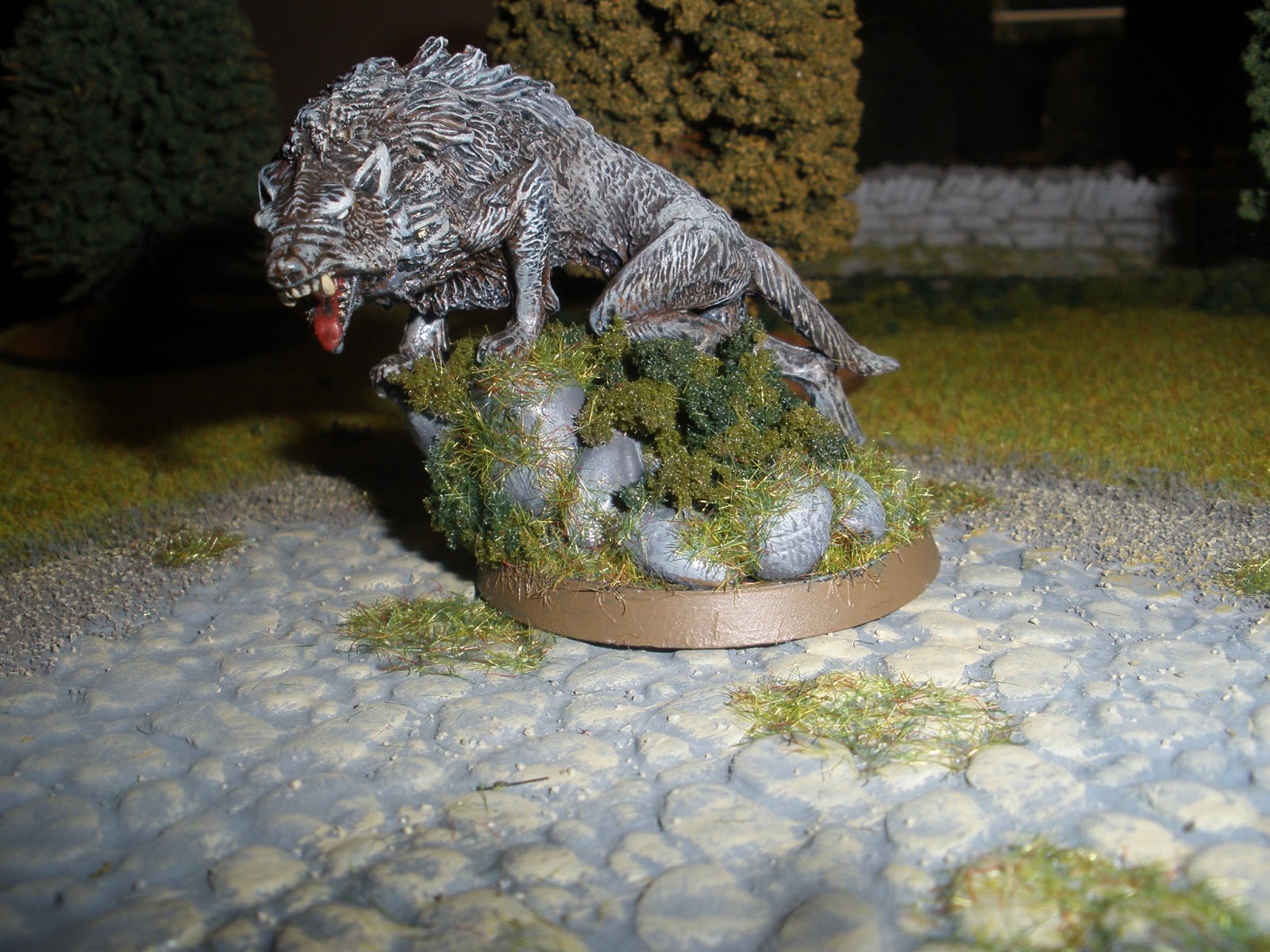 This is the cue for the GM to step in and spice things up a bit. Behold the Ihmissusi! The unexpected appearance of this beastie automatically alerts the Orcs who spot the sneaking adventurers as a result. With a mournful howl the Ihmissusi lopes towards the scent of prey. 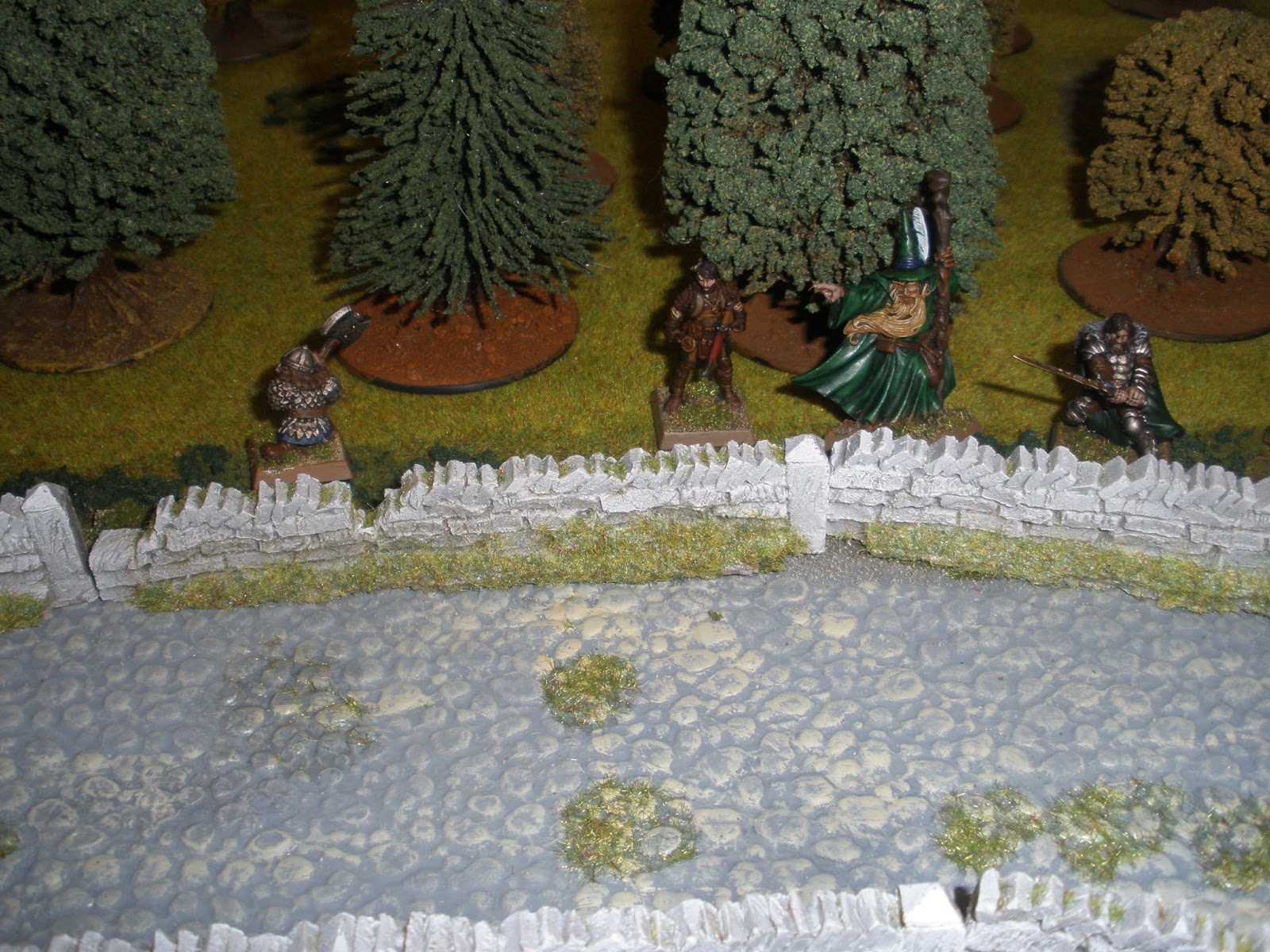 Apparently, Dwarfs are not natural sprinters, they are natural rearguards. The panicked adventurers flee along the road wall leaving Toin to face the approaching predator. 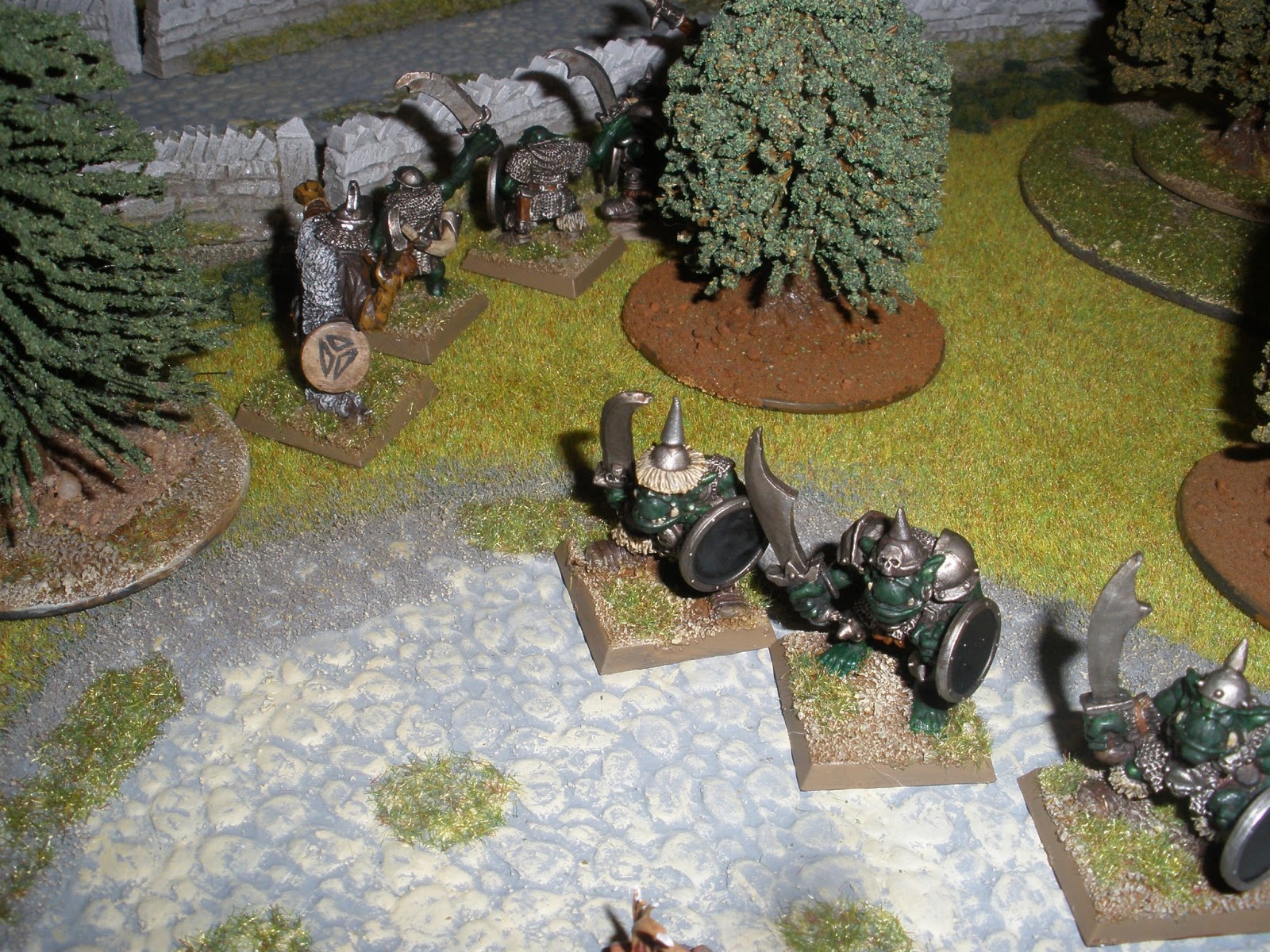 The Orcs are equally convinced the Wolf-thing is coming for them (and I haven't even rolled the dice yet!), they leave three of the ladz to guard the camp while Urklasch leads the rest towards the road. 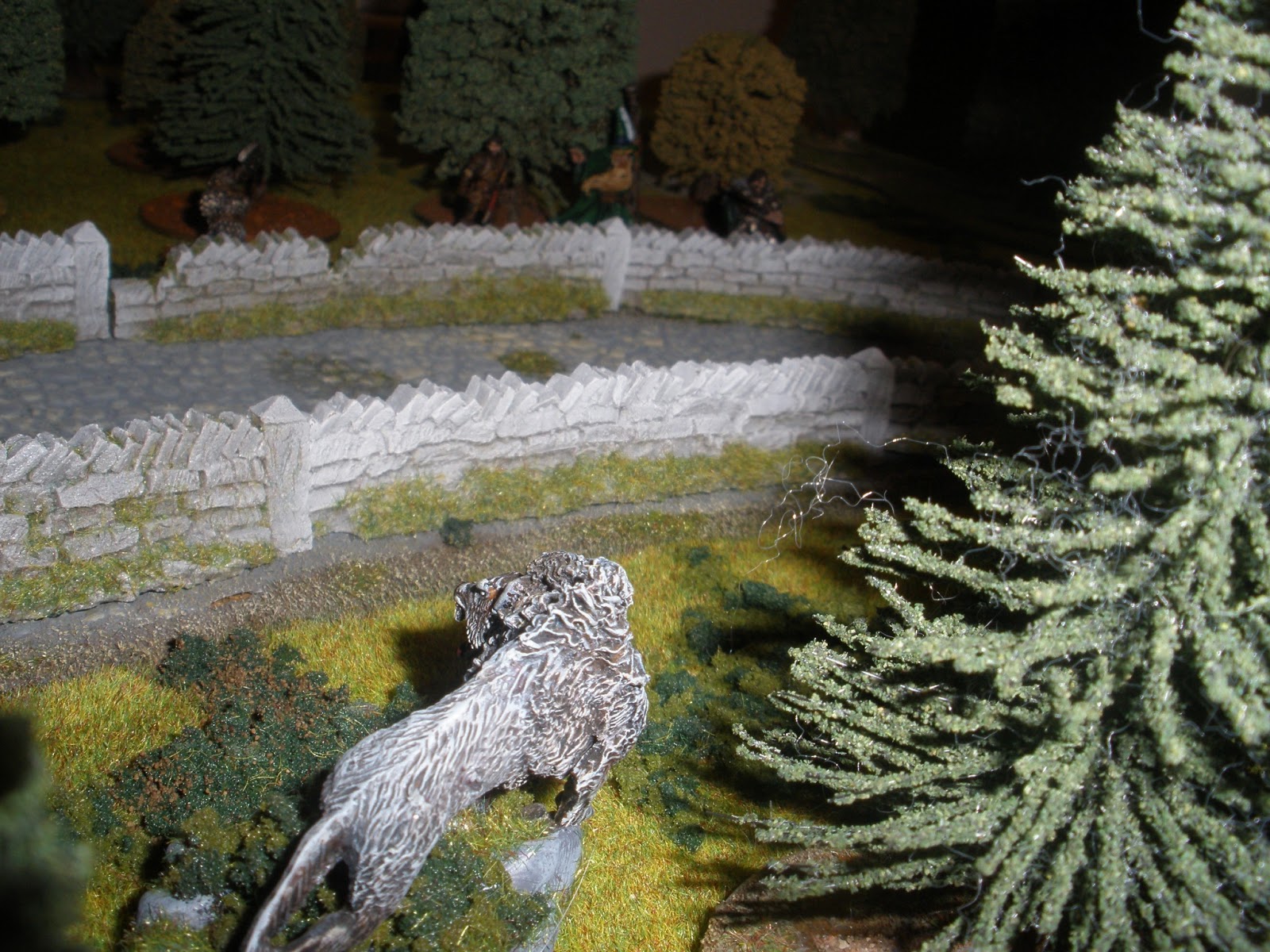 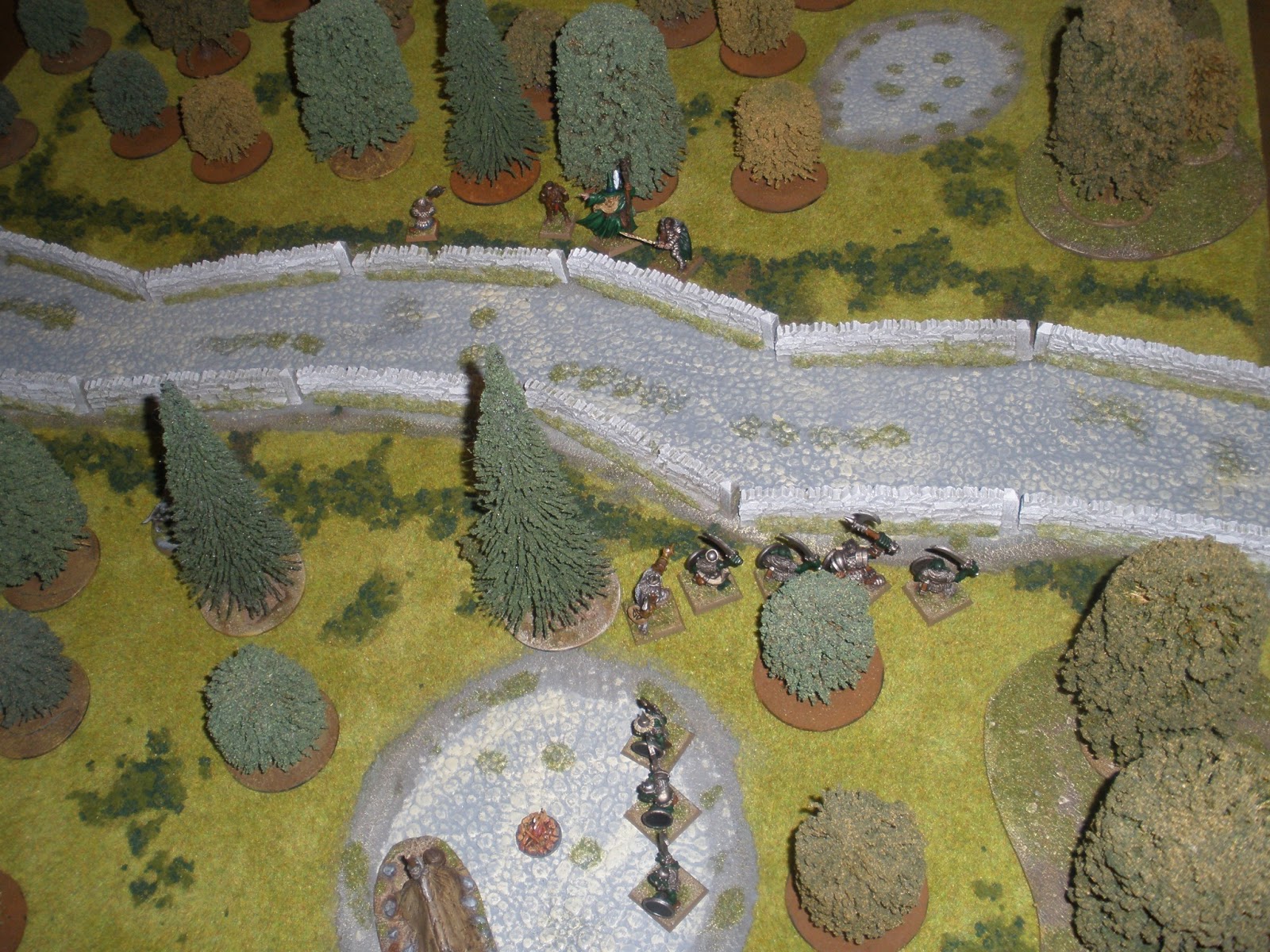 Battle is about to be joined, the Ihmissusi can only be half-glimpsed as it thunders through the trees. 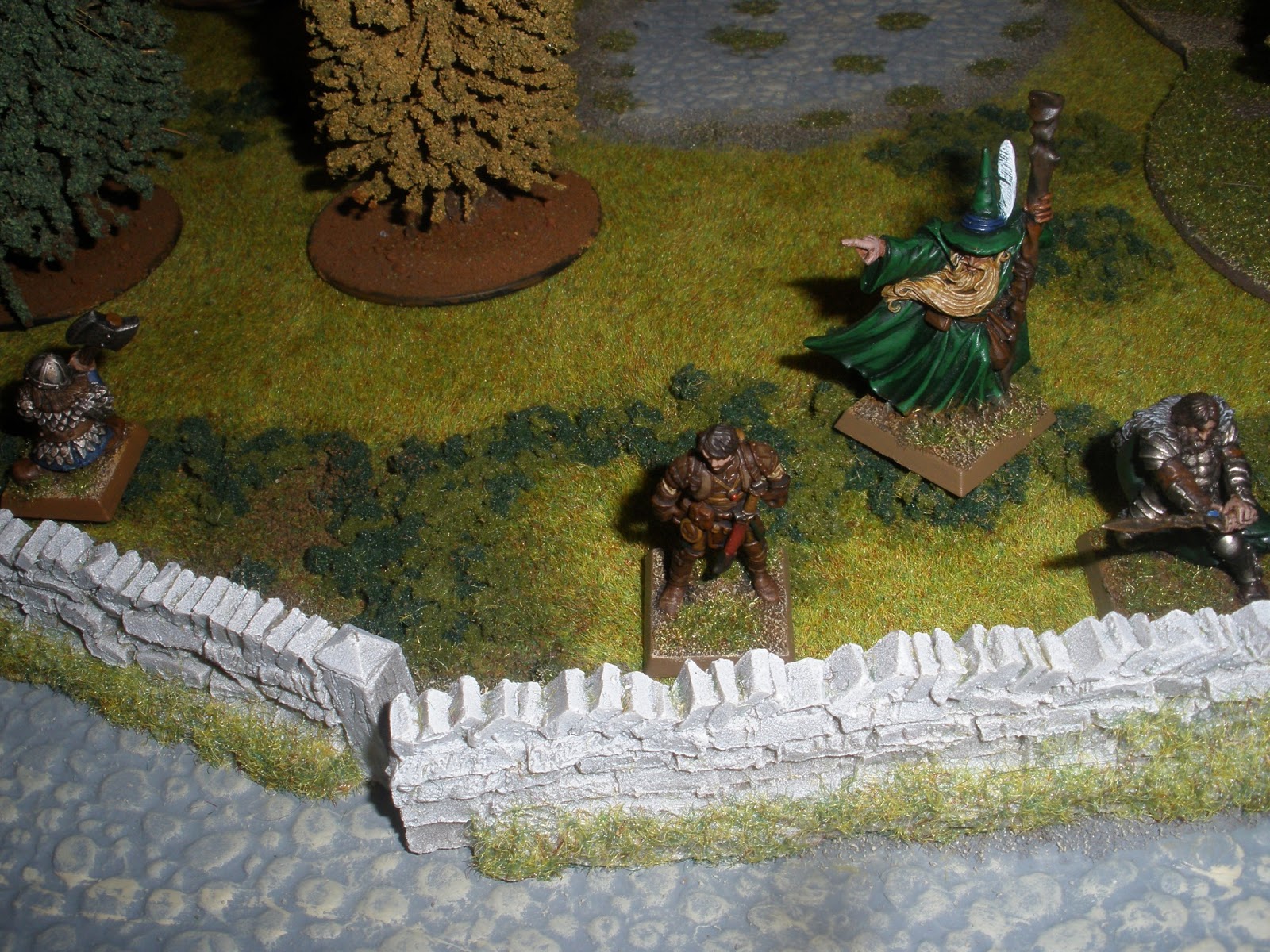 The brave Heroes continue their 'tactical withdrawal', (the controlling player doesn't even know the stats for the Ihmissusi, fear of the unknown seems to be unmanning him). 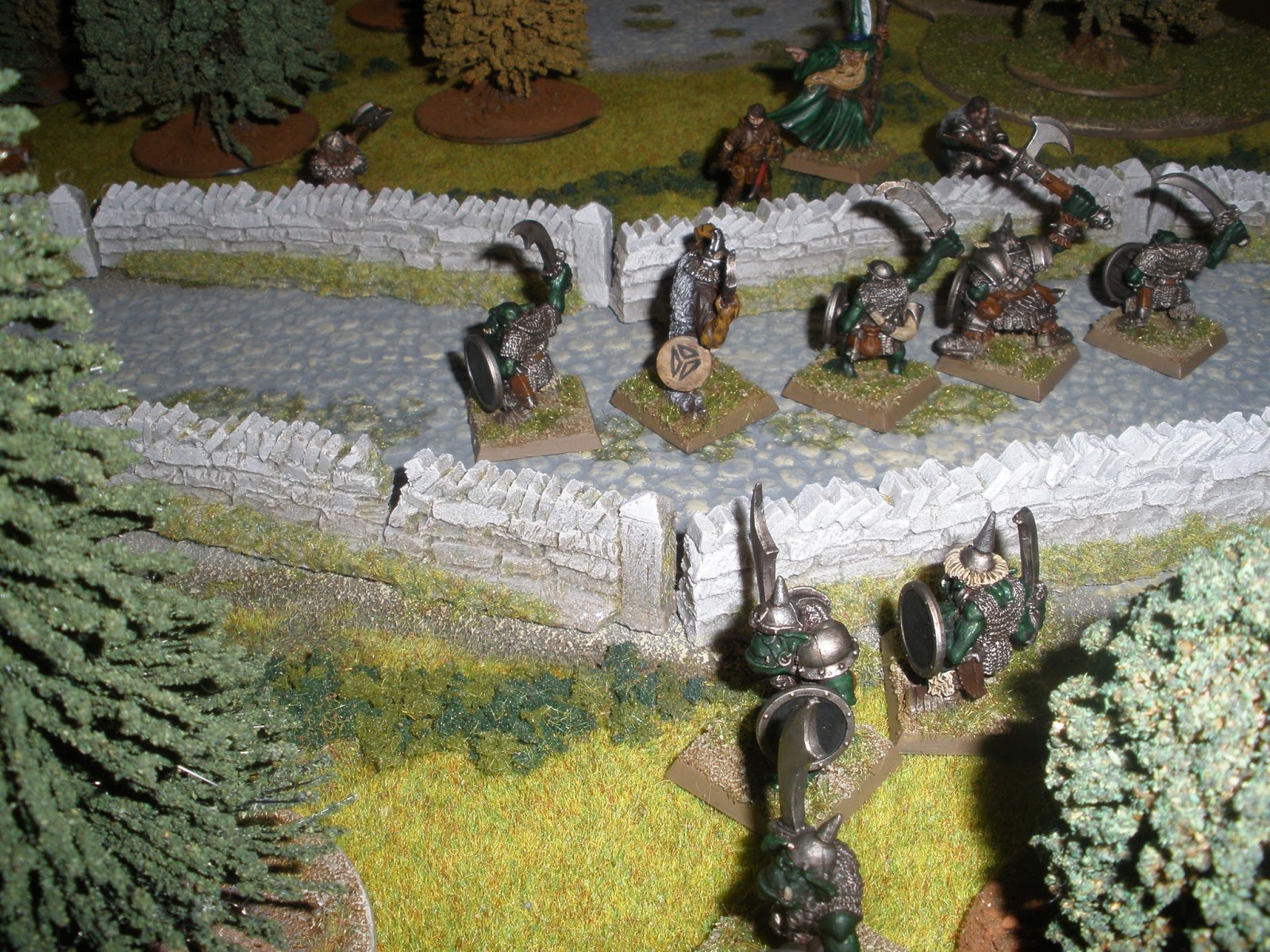 The Orcs are altogether more reckless, they leap over the wall into the road and advance on the adventurers. 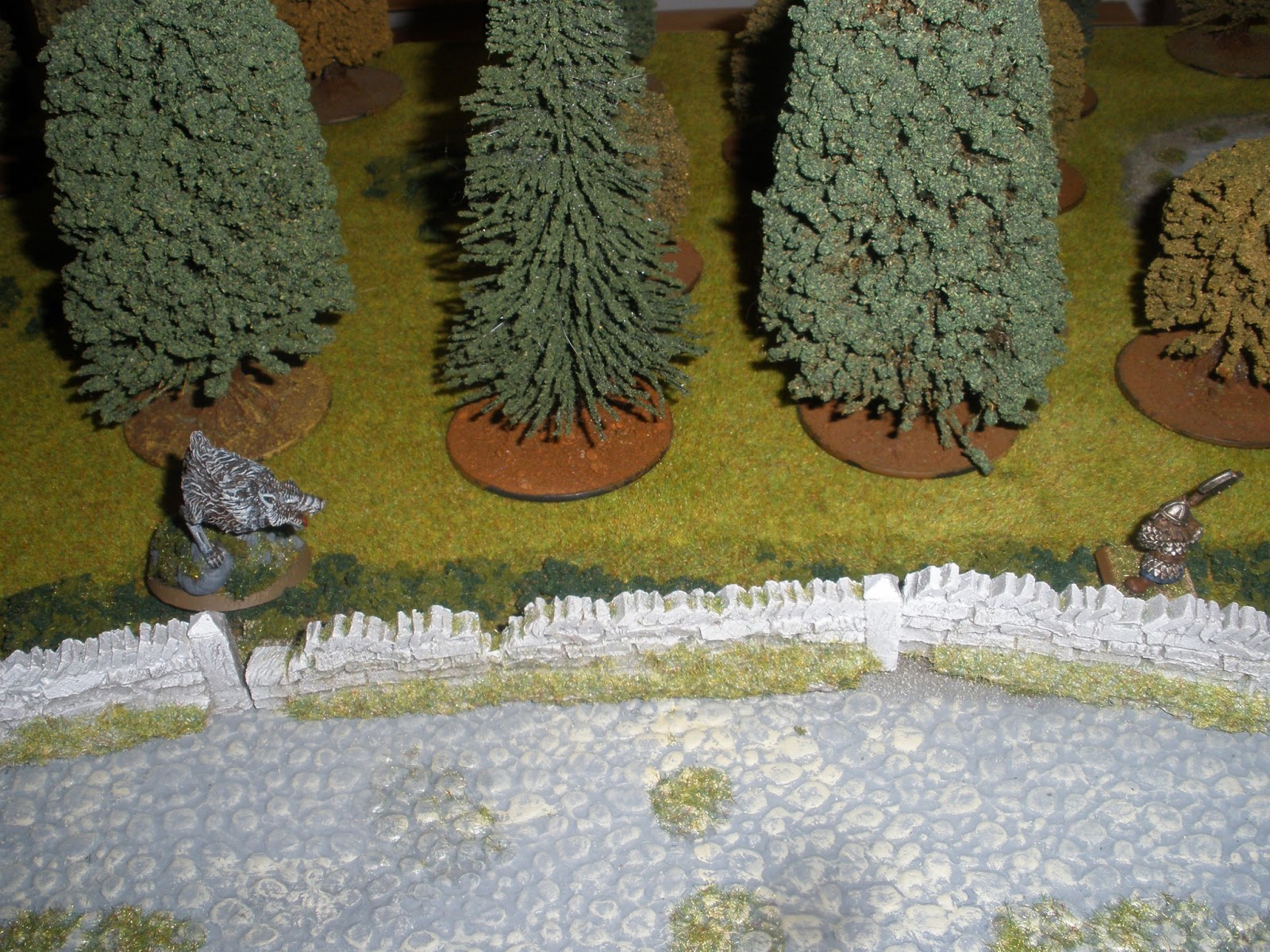 The cunning monster bounds over first one wall, then the other. This leaves the unlucky Toin Deepwater in deep something else. 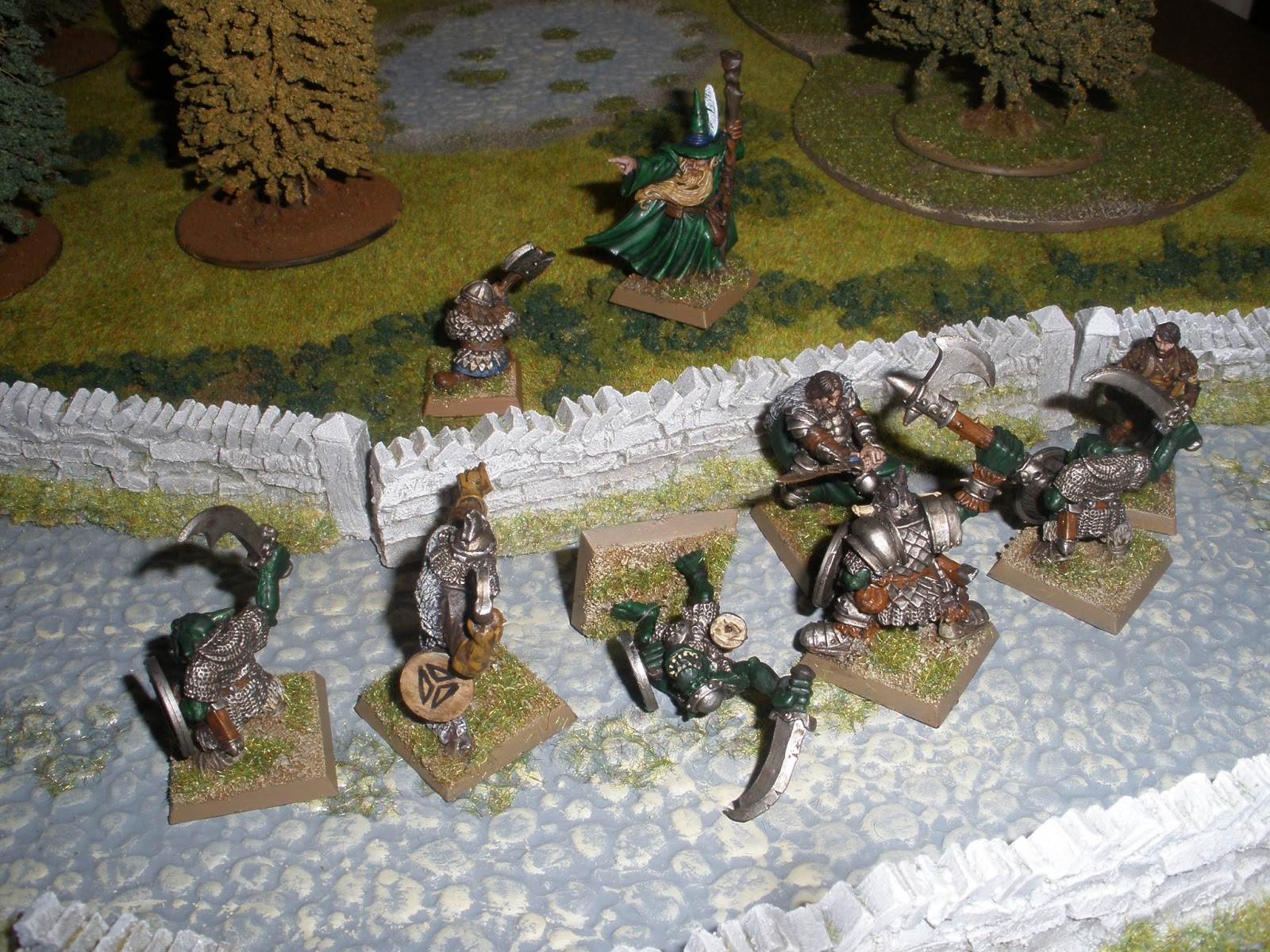 Saul and Fingers finally overcome their doubts and charge into the Orcs, though a cautious exchange of blows sees the combatants circle each other ineffectually seeking an opening. Lazarus claims first blood with a Fire Ball that incinerates Hakkr the Horn-blower. Toin wisely falls back towards his comrades. 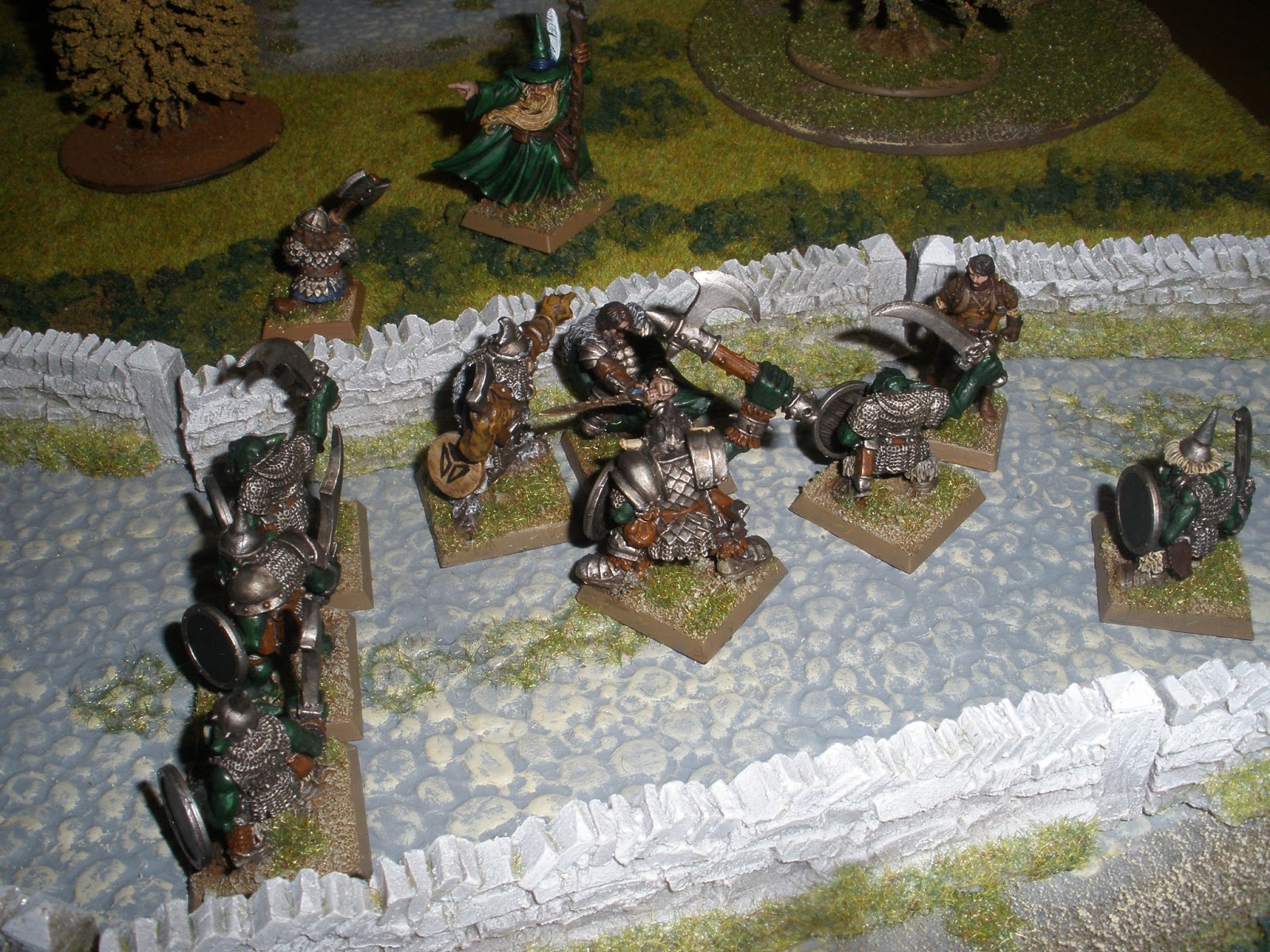 The Orcs prepare to crush the intruders, three Orcs guard against the Ihmissusi (I have been dicing to see whether the beast stays focussed on the adventurers or decides the orcs look tastier), while Urklasch charges Saul. One of the ladz positions himself for a charge on Fingers. 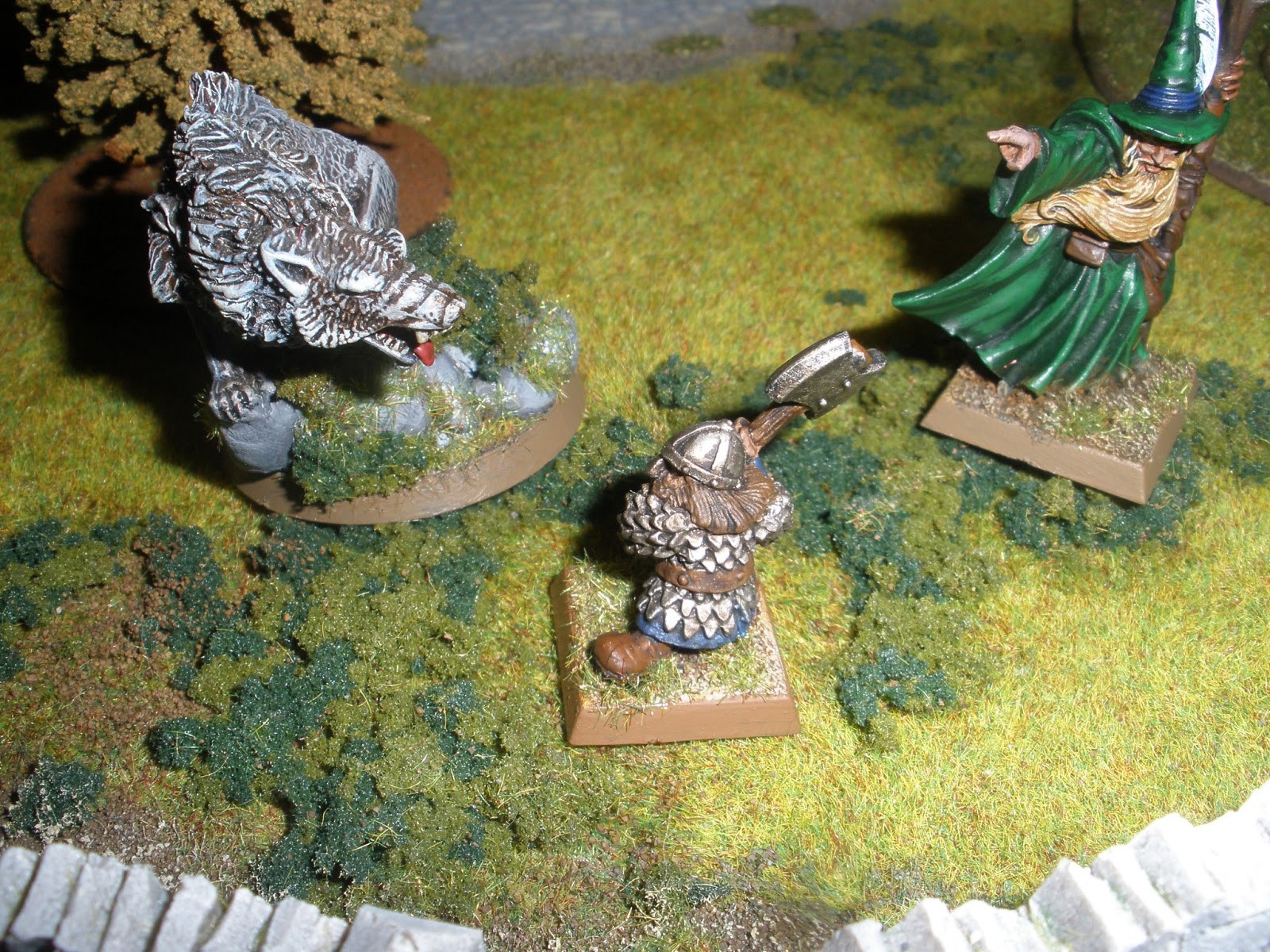 The inevitable happens, the lightning fast Were catches up with the encumbered Dwarf, badly wounding Toin. Lazarus, seeing his own life in danger, frantically casts cure light wounds on the bleeding Dwarf.