The field of battle this week was an eerily silent and abandoned Spaceship (courtesy of Space Crusade). This 'Hulk,' as they are sometimes known, had appeared suddenly in orbit around Azure Prime's moon. With all of the Imperial military dedicated to fighting the guerilla war against the Red Axe and his heretic insurgents, High Command decided to contract the HPS to board the vessel. Conveniently Captain Travers and his section of HPS soldiers had recently completed a mission on Azure Prime and were located at the Capital Spaceport awaiting redeployment. As the hulk, 'Advantageous', checked out clean for life signs and any hint of corruption the HPS board readily agreed a fee and contacted Captain Travers. He was to take an old rescue tug with an emergency docking claw and board the Advantageous, before proceeding to the bridge and disabling the warp engines that had been propelling the ship on random jumps for centuries. 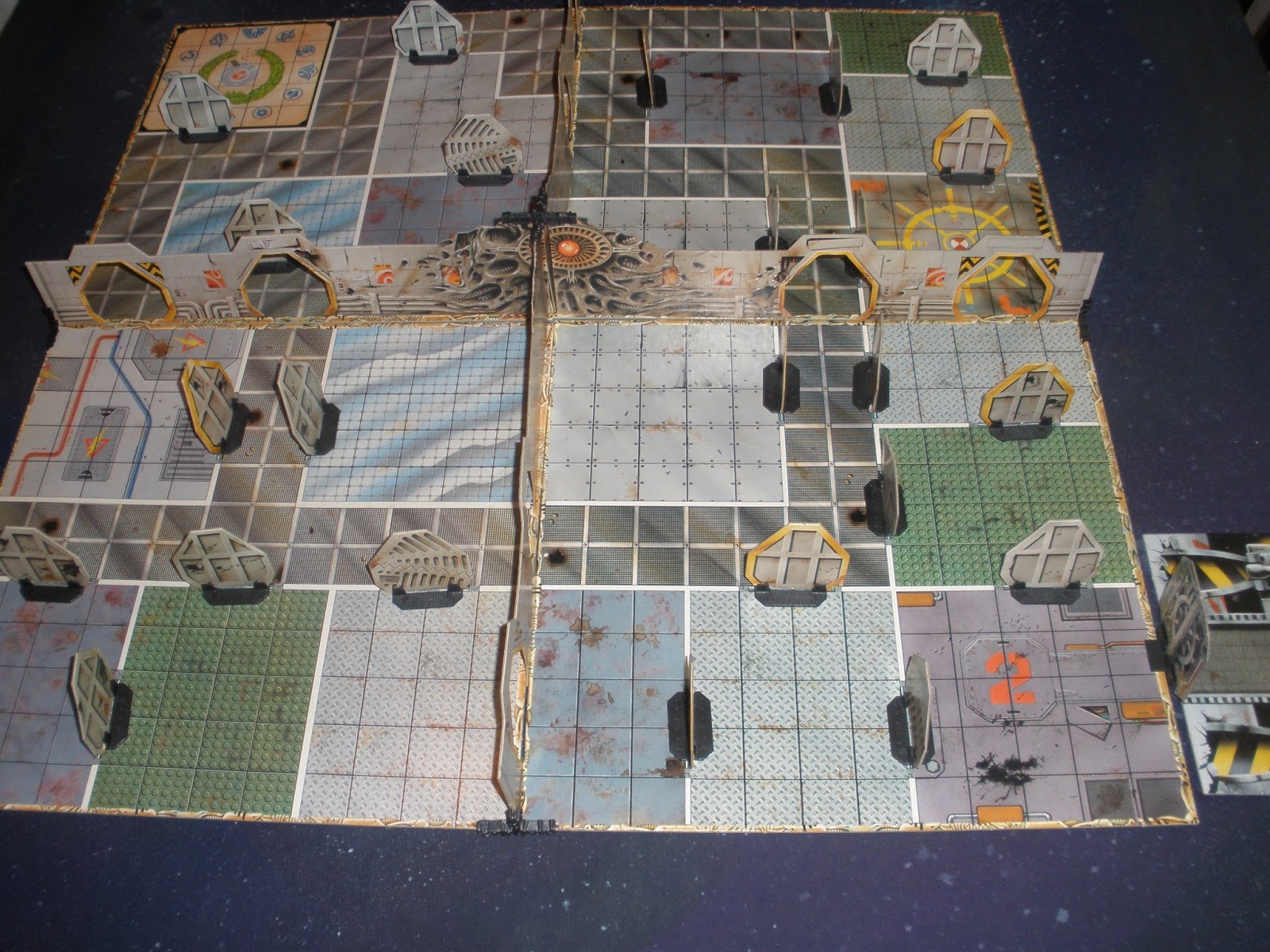 The Advantageous, cause of loss unknown due to incomplete records. Recommend extremely prejudicial retraining of personnel responsible. 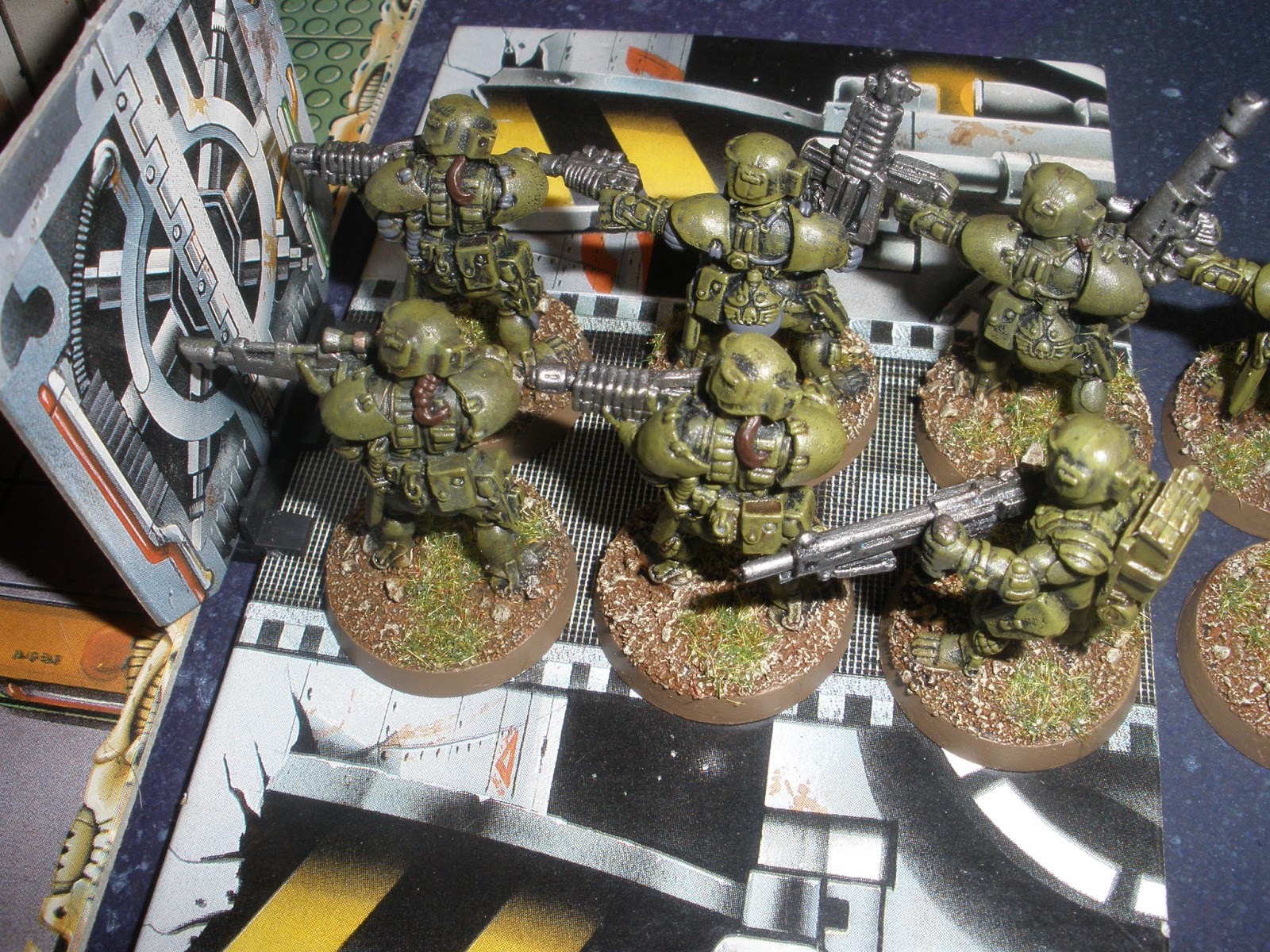 Travers prepares to lead his men on what should be a routine mission, even so there are a few nerves. Travers has been reading the bridge manual on the journey up, the controls seem complicated but not indecipherable. 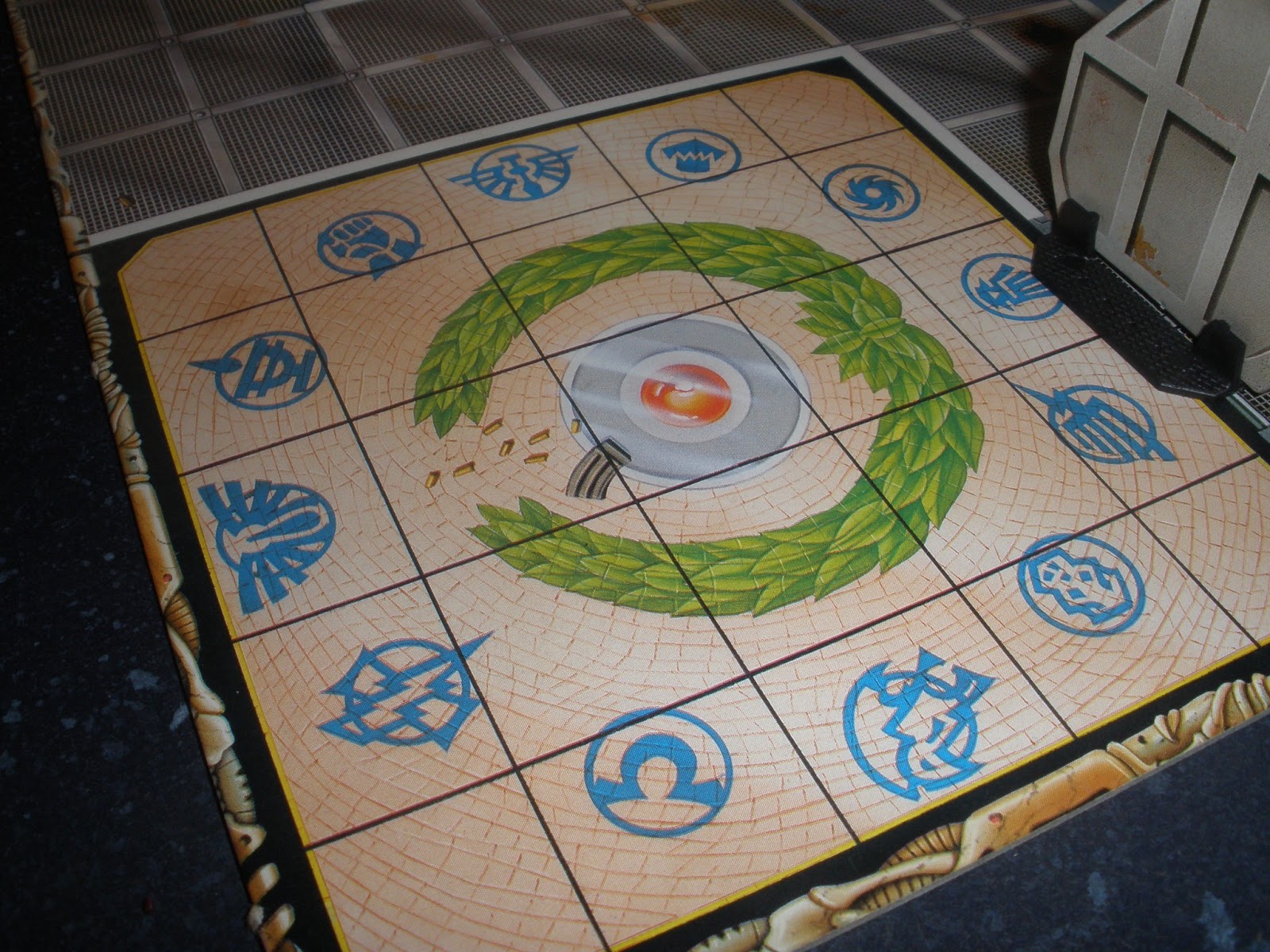 The bridge of the Advantageous. 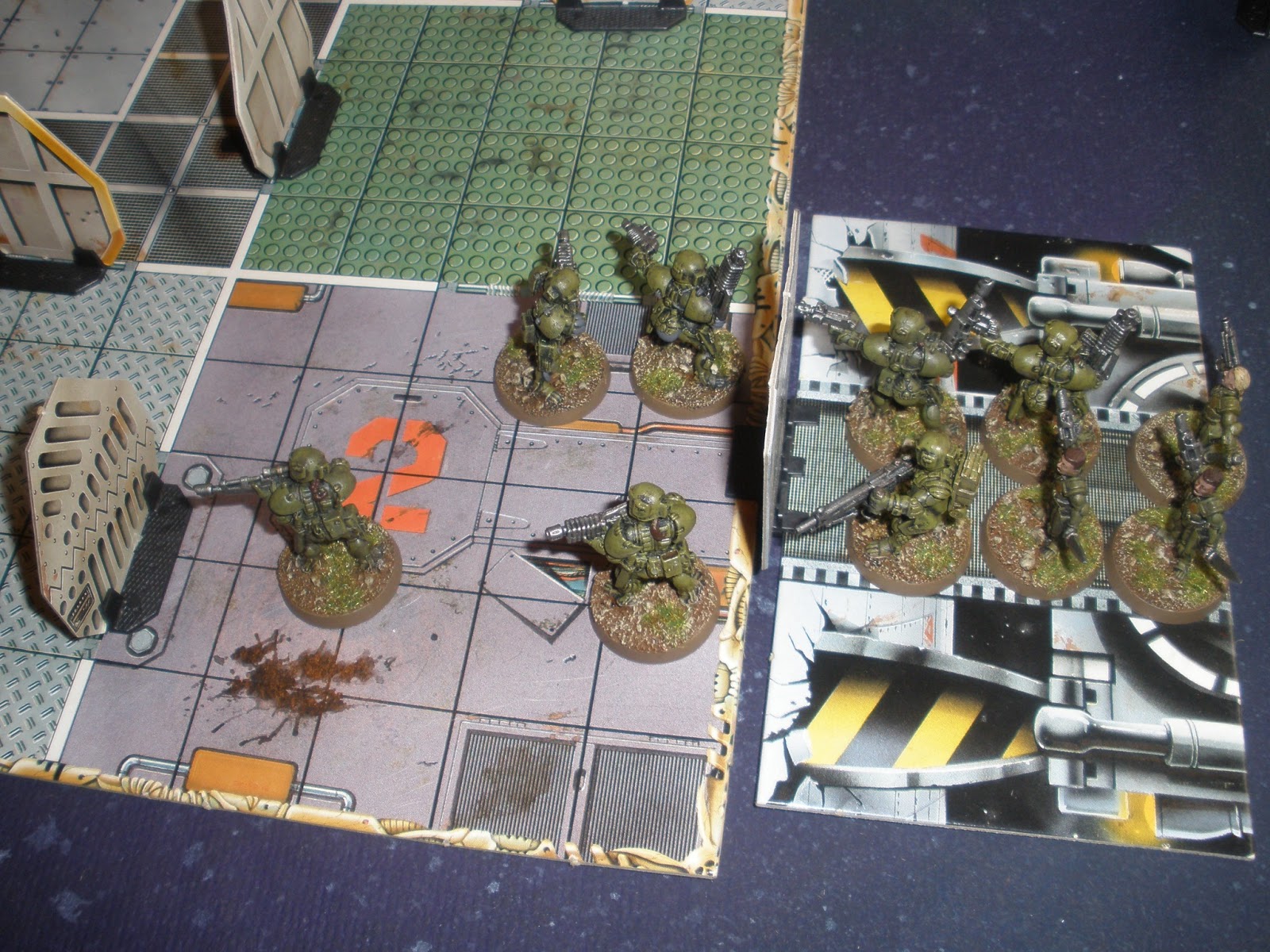 Travers and Portman move into the hulk cautiously while Lawson and Higgins break right. (The person playing Travers has been told the hulk is empty but knows that I have also briefed another player who is sat smirking in the corner, so nerves are taut). 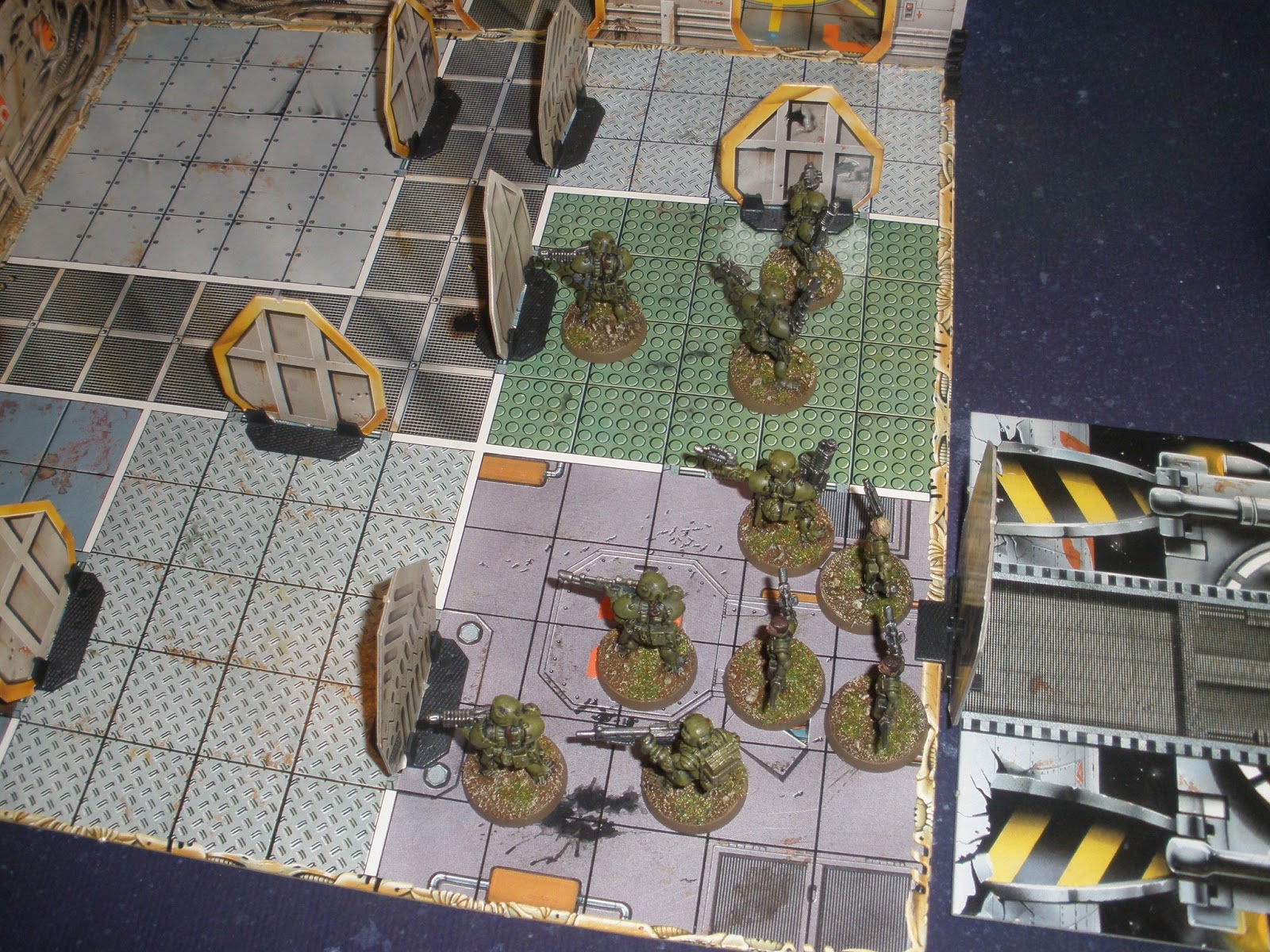 The HPS section tries to make steady progress whilst keeping all angles covered. 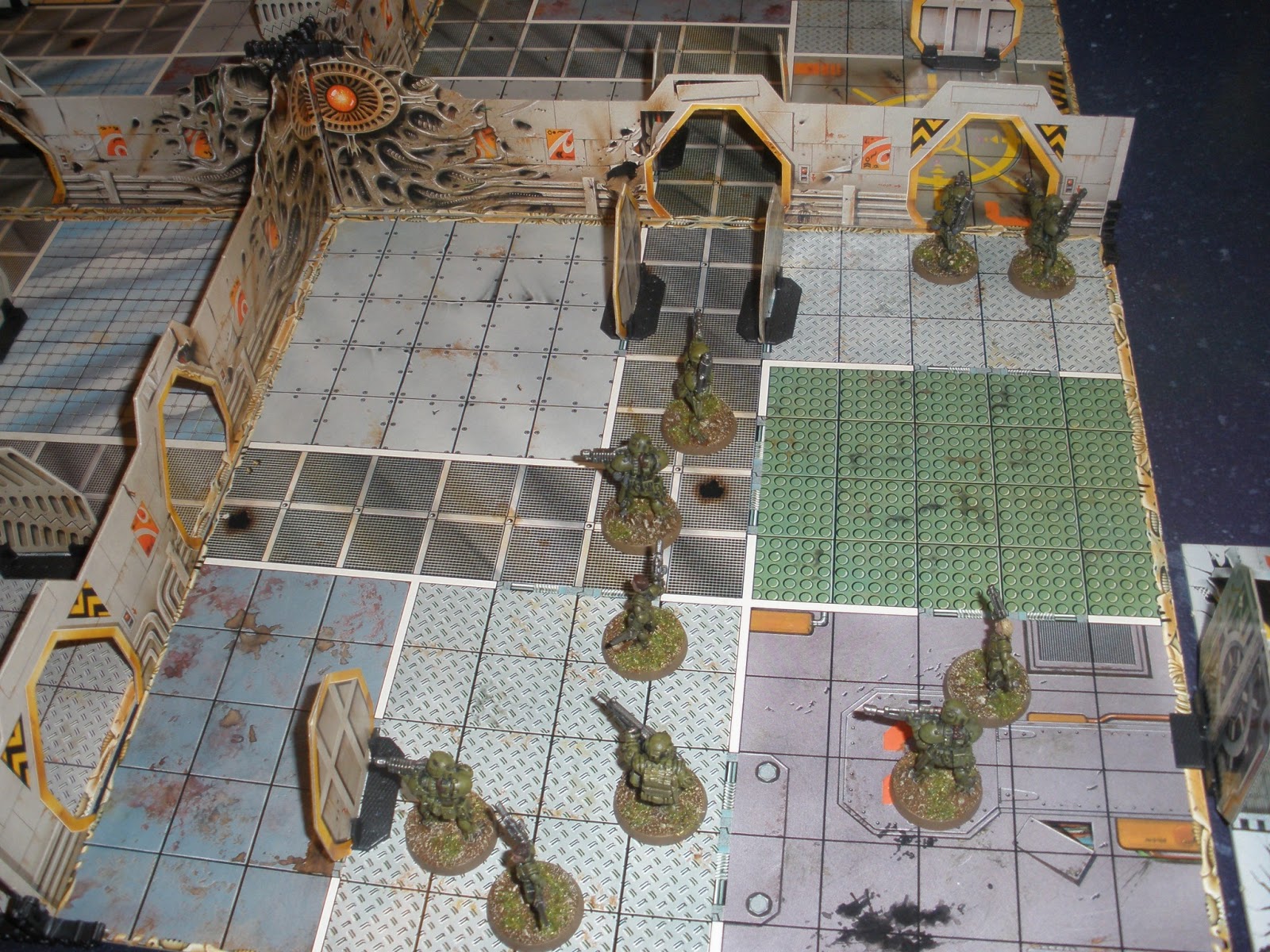 Travers has stayed in the loading bay with one of the new guys, the rest of the section has spread out to conduct room to room searches. Travers decides on a route to the bridge and sets a rearguard. Unbeknownst to the HPS their progress is being monitored via remote camera, but who by? 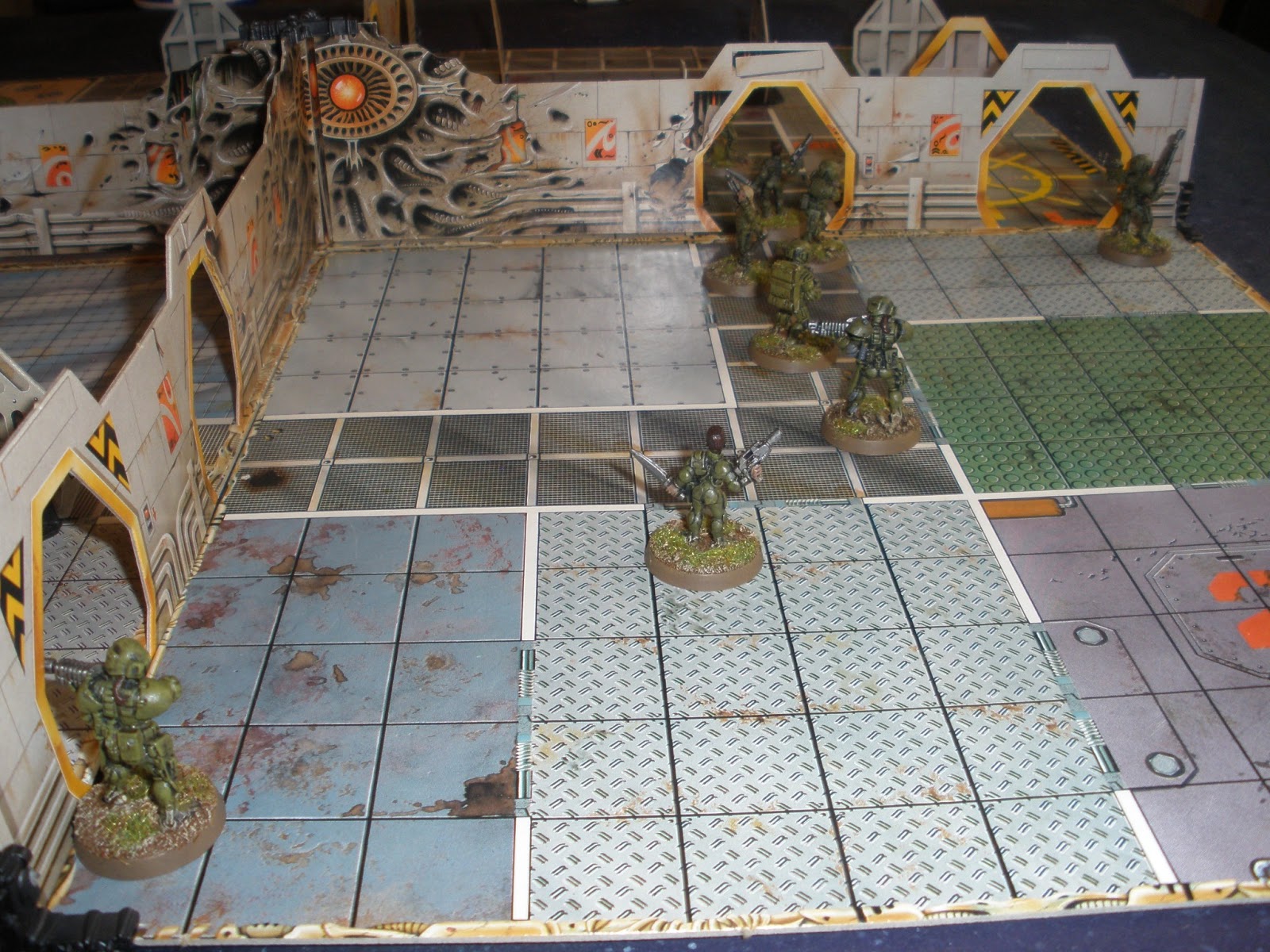 Travers realises he cannot clear his way to the bridge effectively unless he reduces the rearguard to two men. 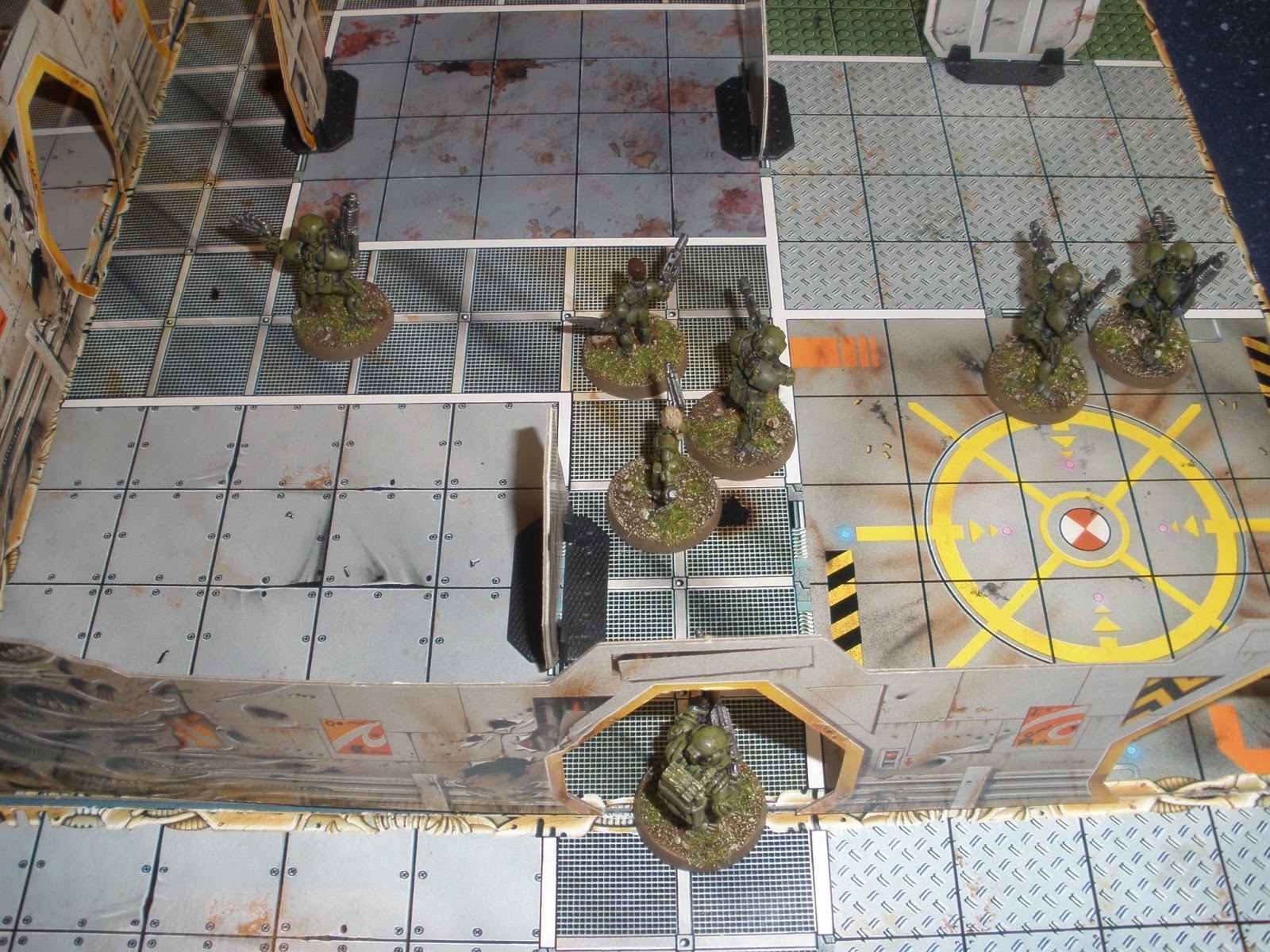 The first section is completely cleared and the HPS are halfway through the second, still nothing out of place. Nerves are twitching like crazy. 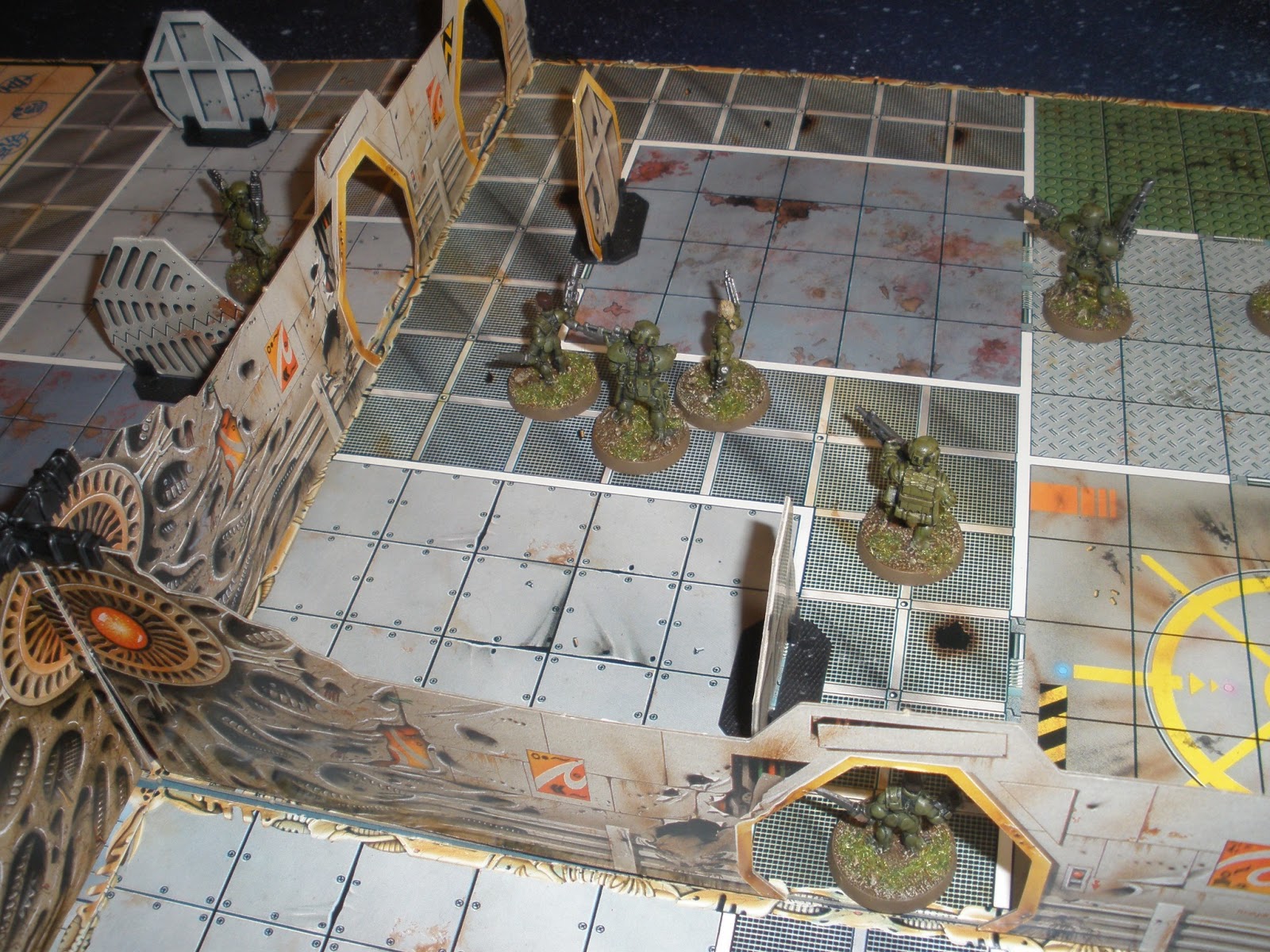 The second section is almost cleared and Baker enters the section containing the bridge, almost there. 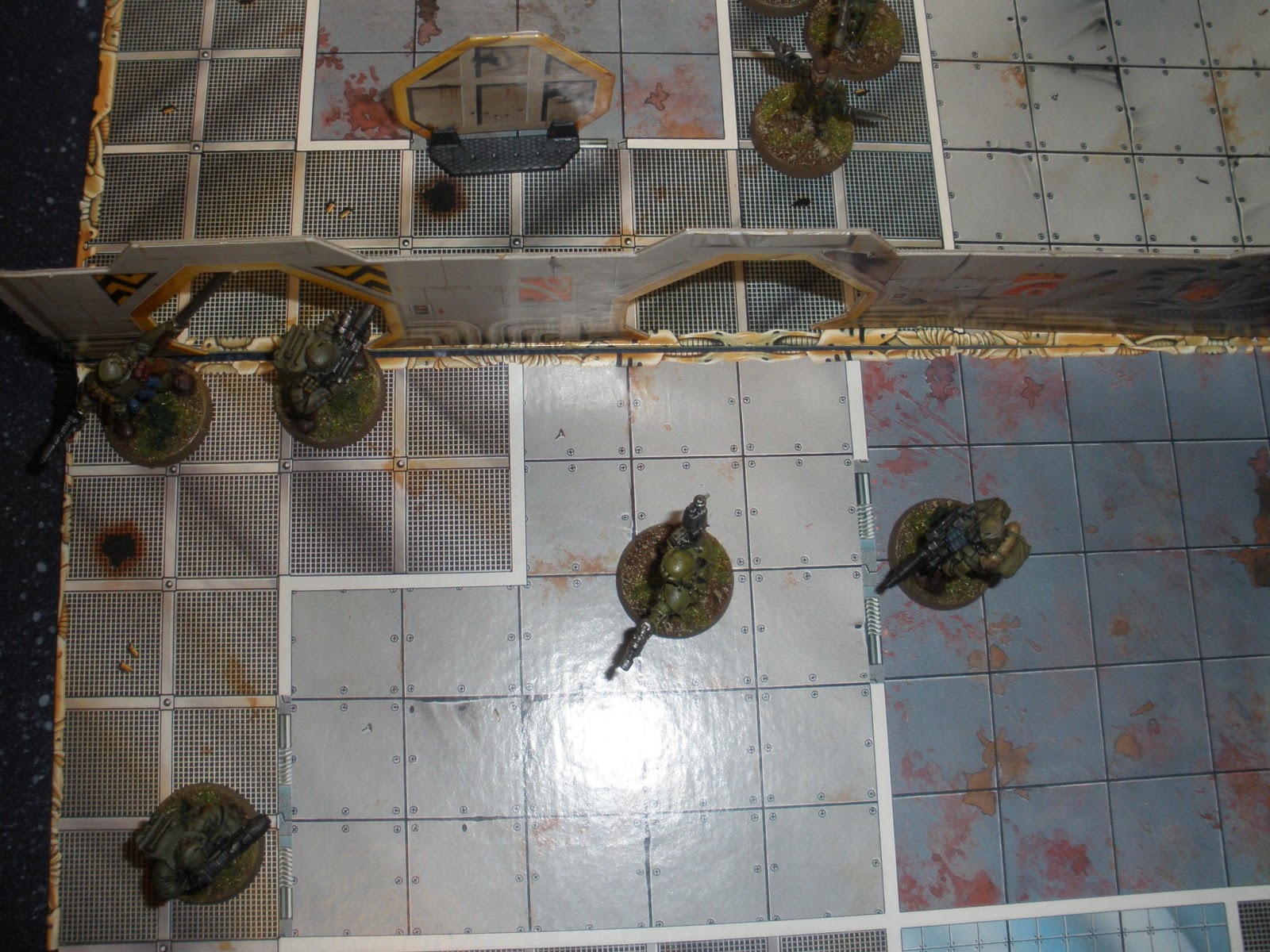 Finally, the trap is sprung. Colonel LeGault is allowed to deploy anywhere out of LOS of the HPS and then have a full turn. Legault splits his eight man Stormtrooper unit into two fire teams, his own blocking the direct route to the bridge and the other in the unexplored fourth section. Two doors swish open on the unfortunate Baker and he finds himself staring down the barrel of a plasma gun. 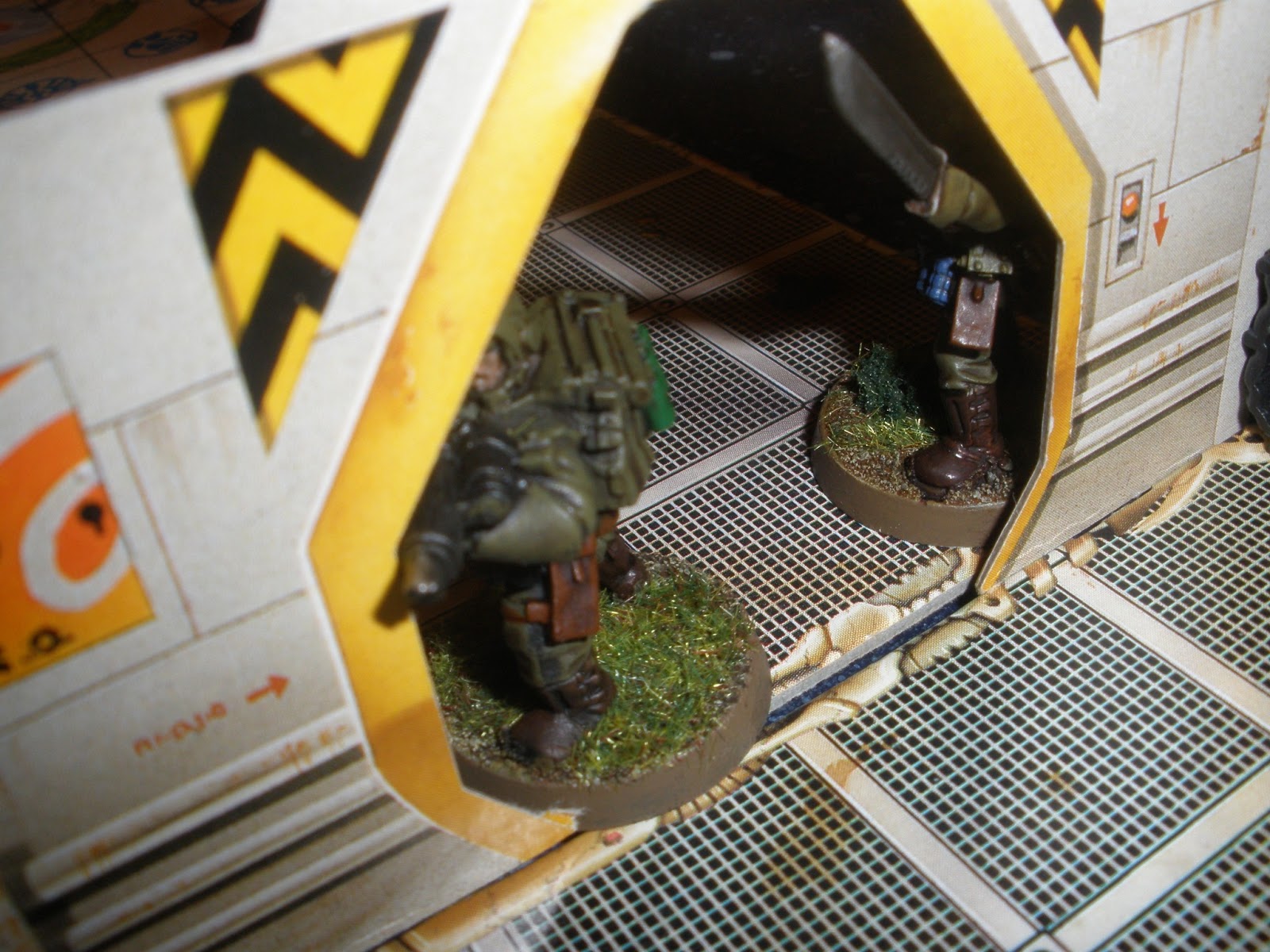 Legault covers the main corridor from the shadows. 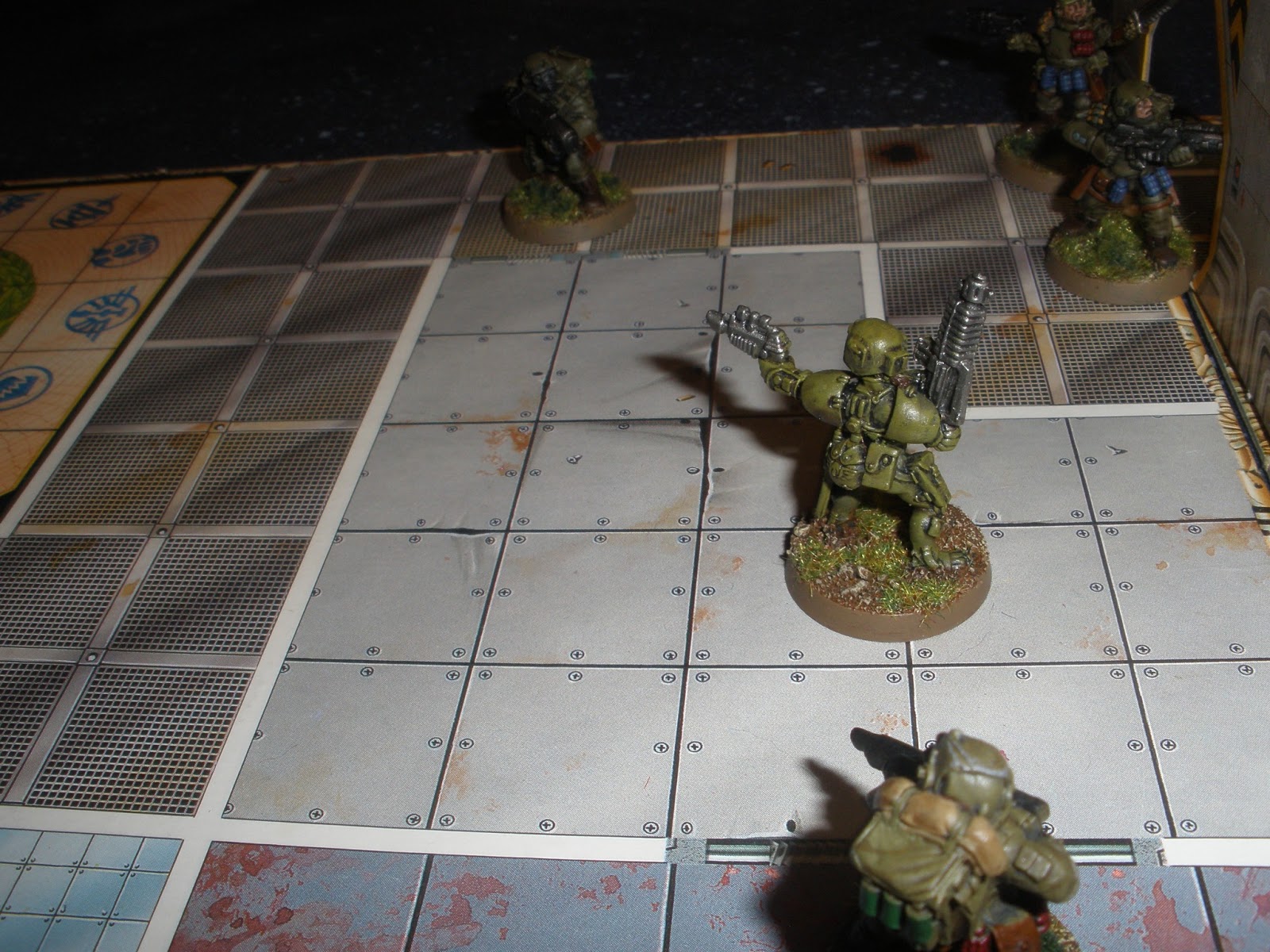 Baker recognises the Imperial insignia of the Stormtroopers and tries to communicate with them. 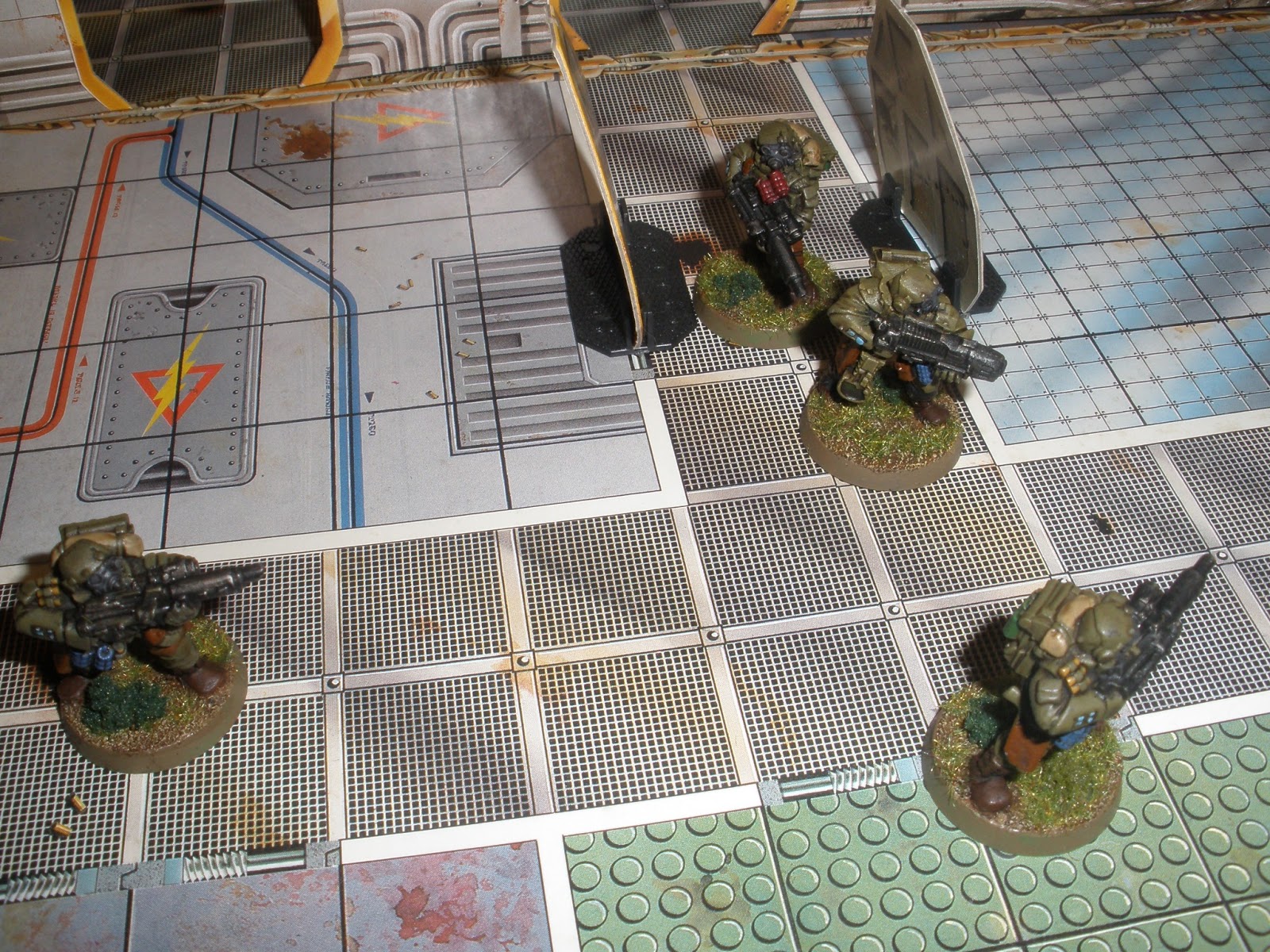 Meanwhile, Legault's second section which is under the command of Sergeant Fulbright moves into position to attack the HPS rearguard. Portman can dimly see shapes moving in the darkness, unable to raise Travers on the comms he fires off a couple of warning shots. 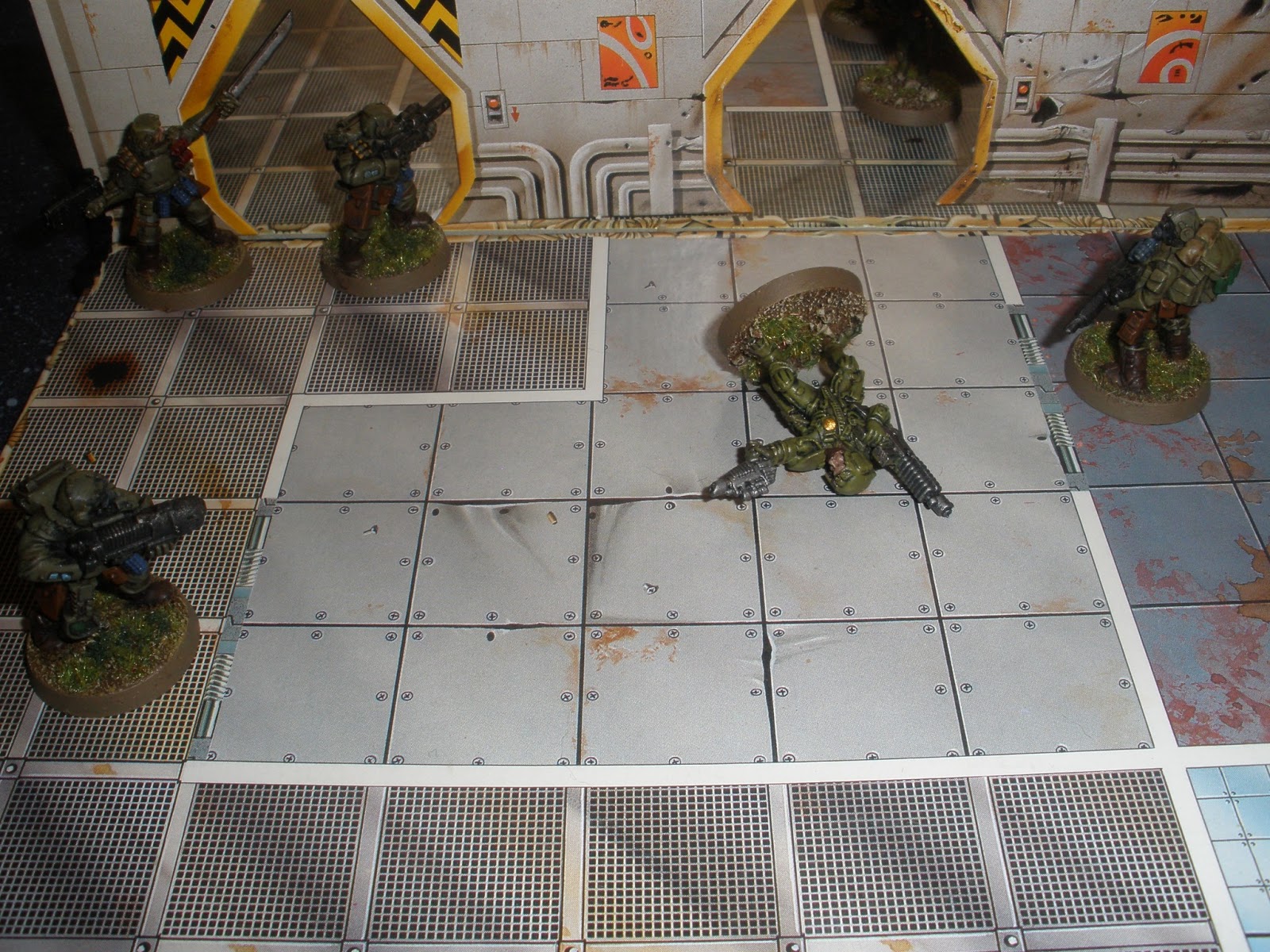 The Stormtroopers aren't here to negotiate, the plasma gun and the laser rifle catch Baker in a lethal crossfire. 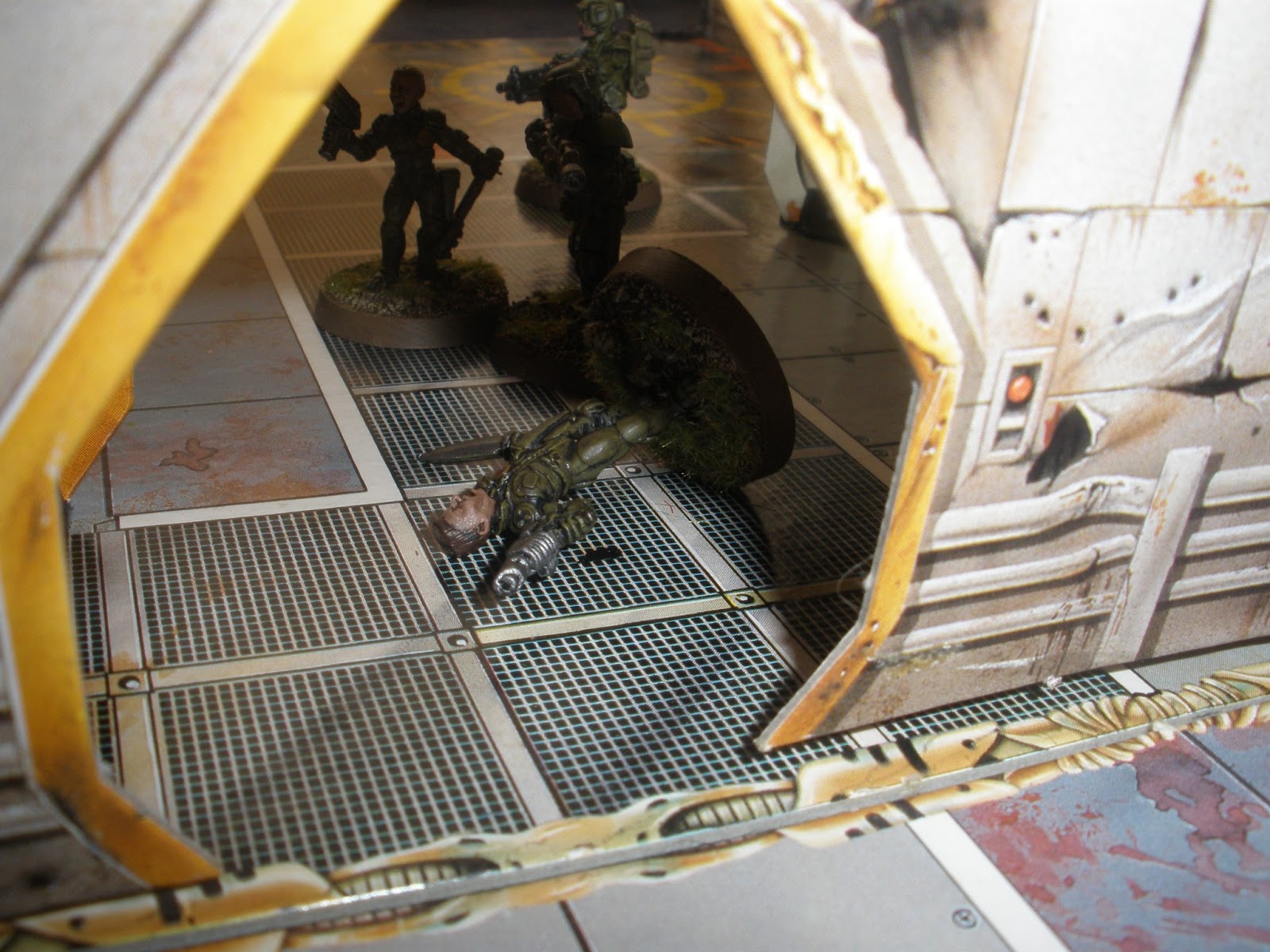 Legault himself personally executes one of Travers' confused new guys with a plasma pistol shot to the face. 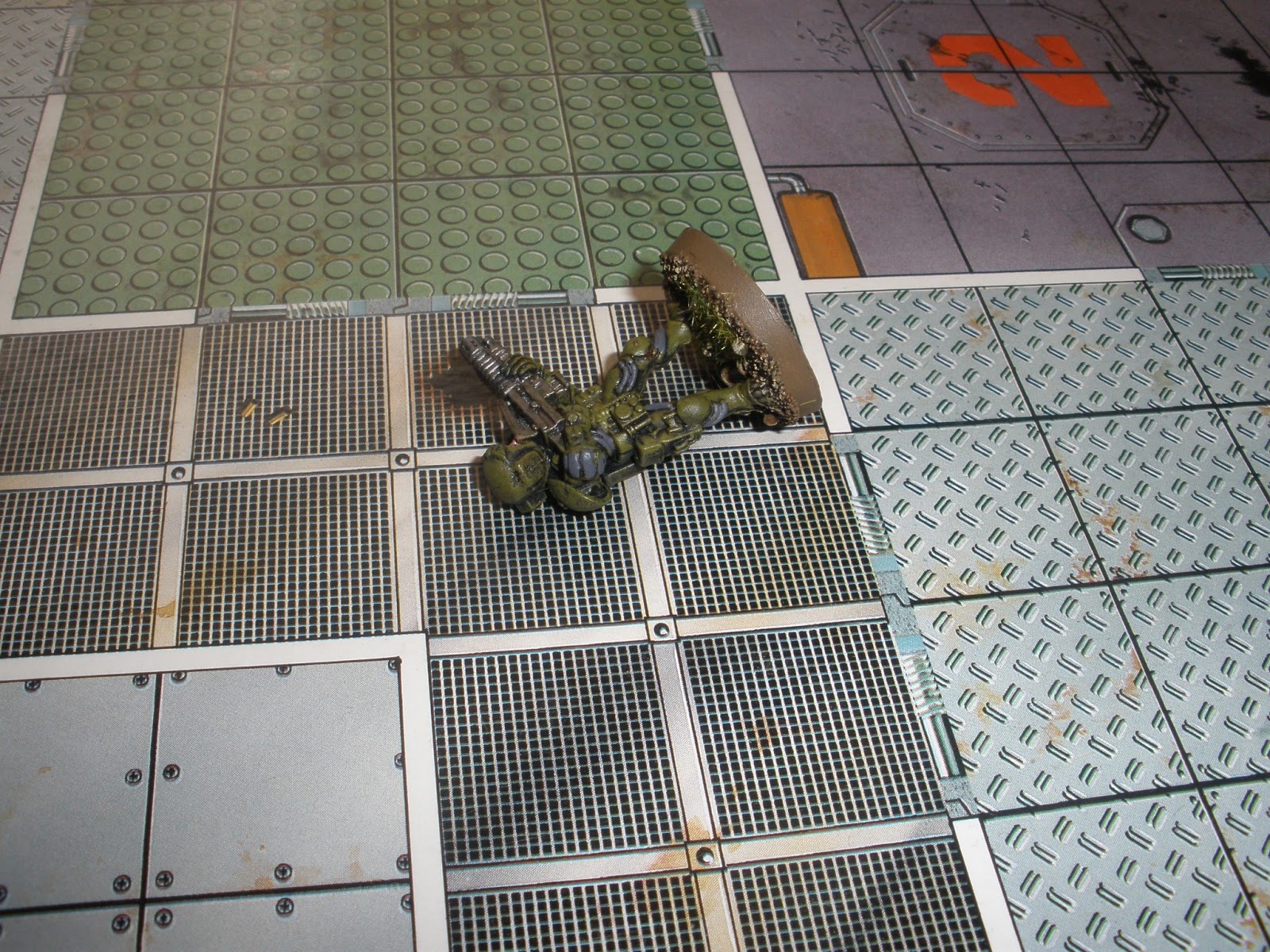 Return fire from Fulbright's fire team kills Portman, the rearguard is severely compromised as a result. 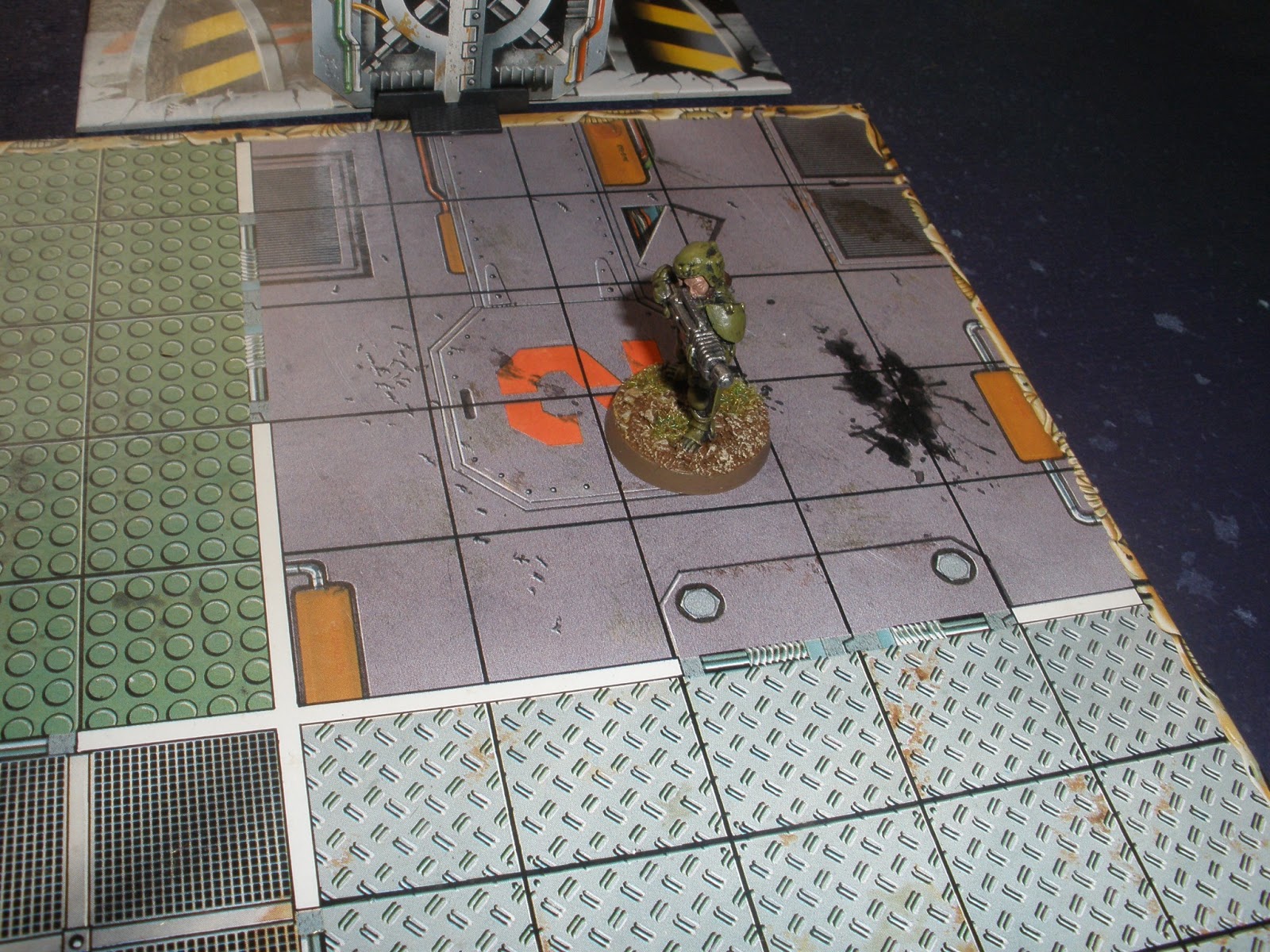 I force a morale check on the sole surviving rearguard who fails and flees toward the rescue tug. 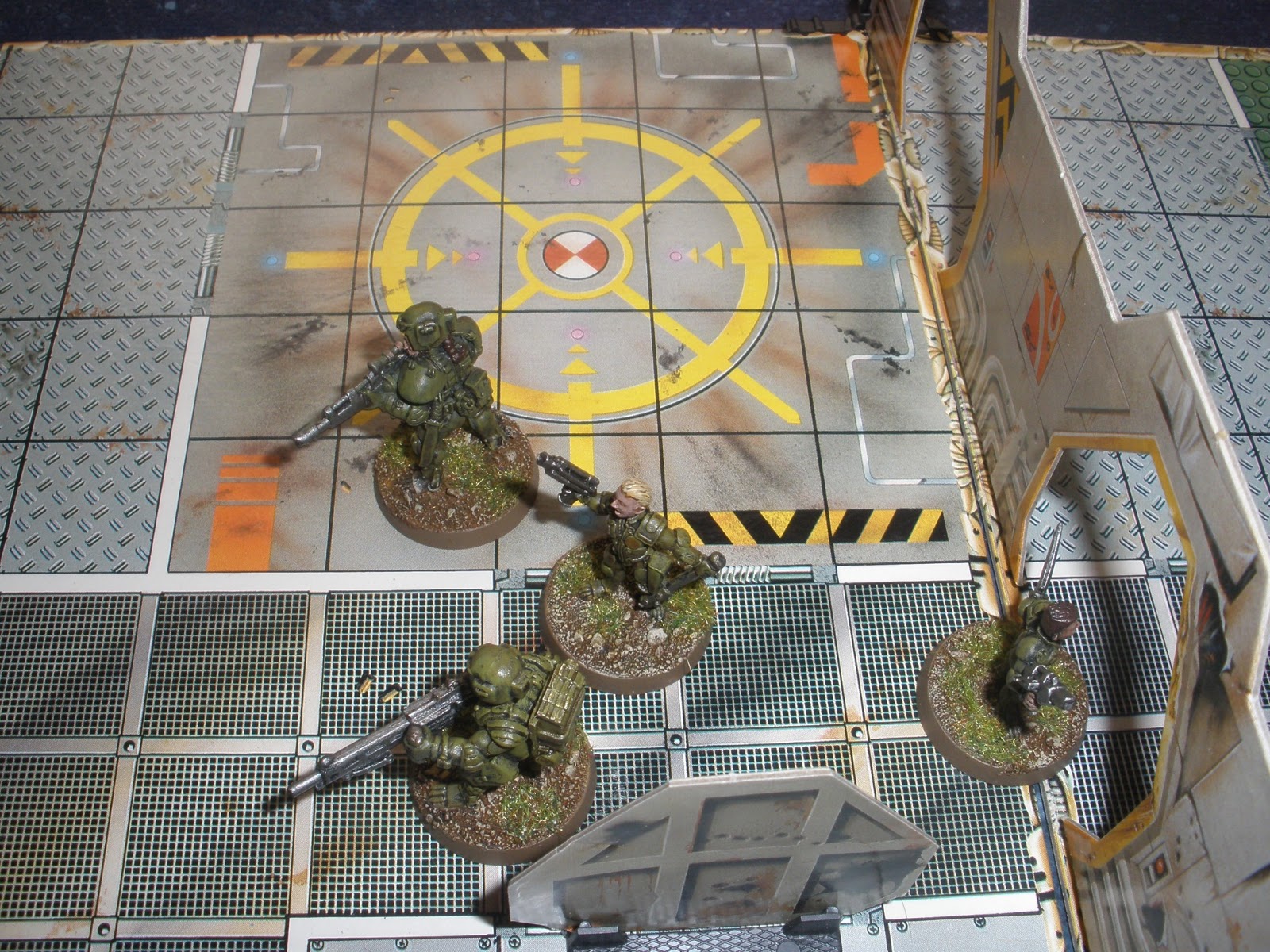 The HPS try to get a perimeter set but cannot get behind Porkins' big gun without him moving to accommodate, this prevents effective overwatch being established in the corridor. 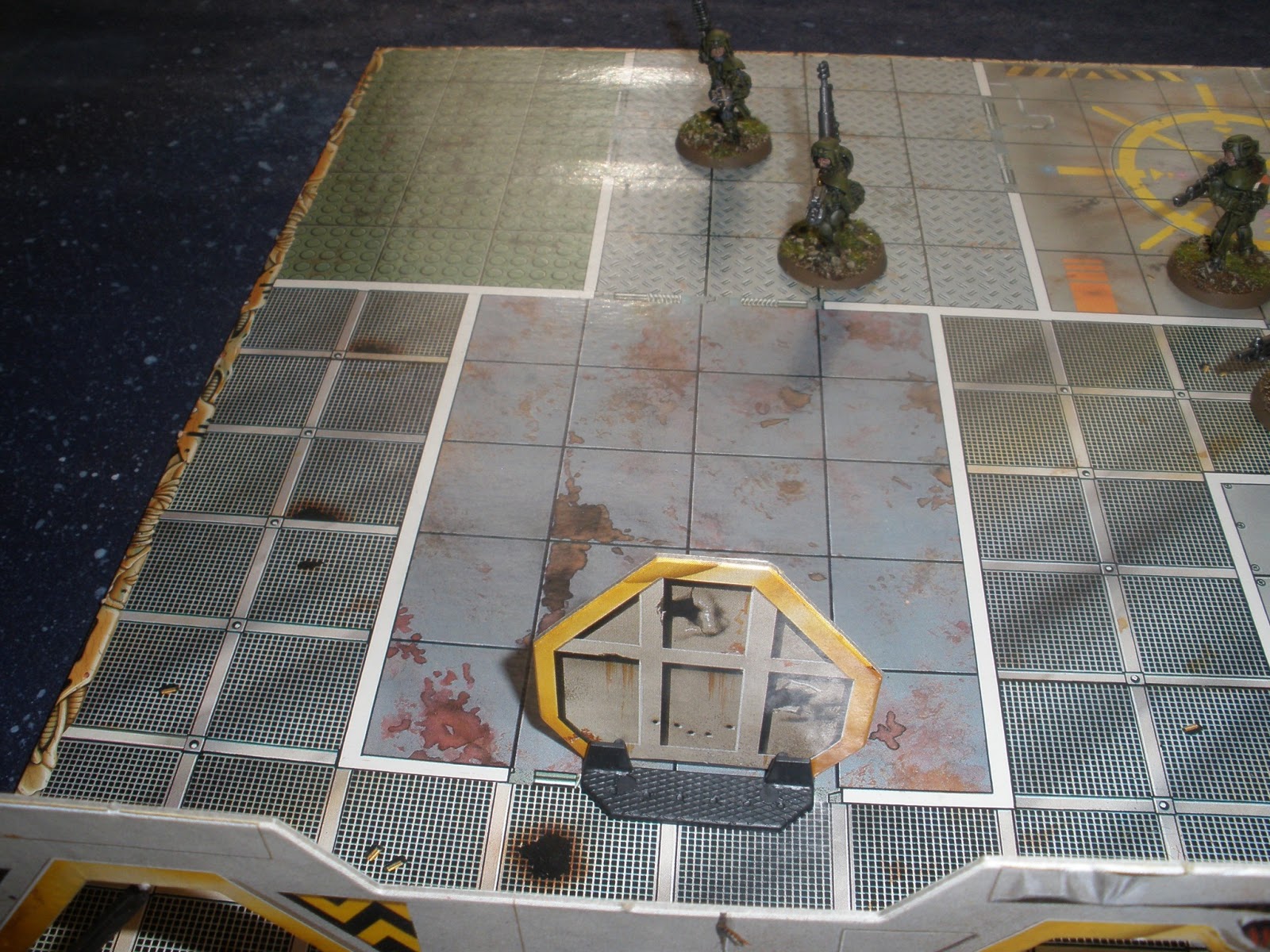 Travers organises his side of the perimeter rather better. 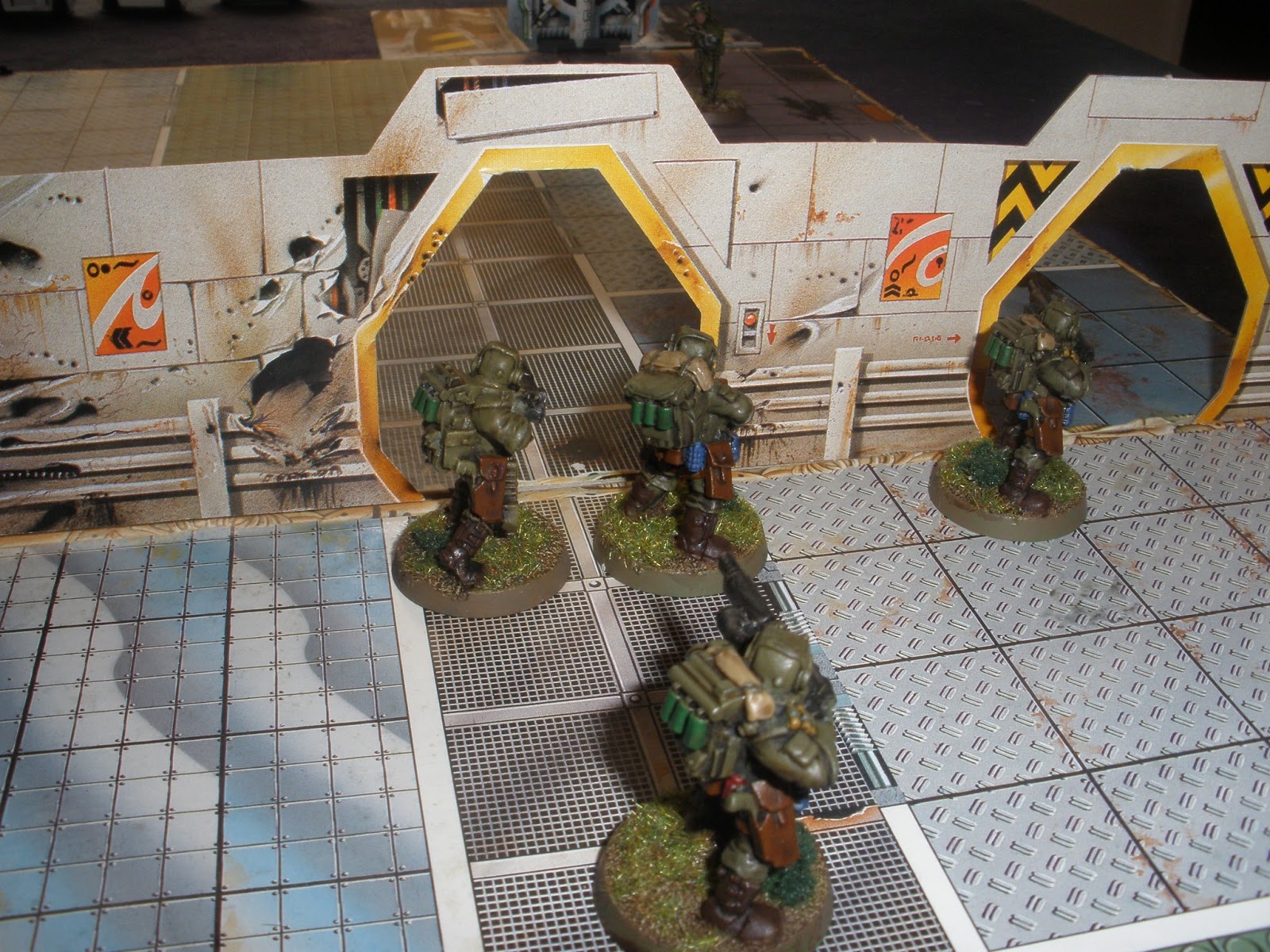 Fulbright is facing no opposition and races forward to press the attack. 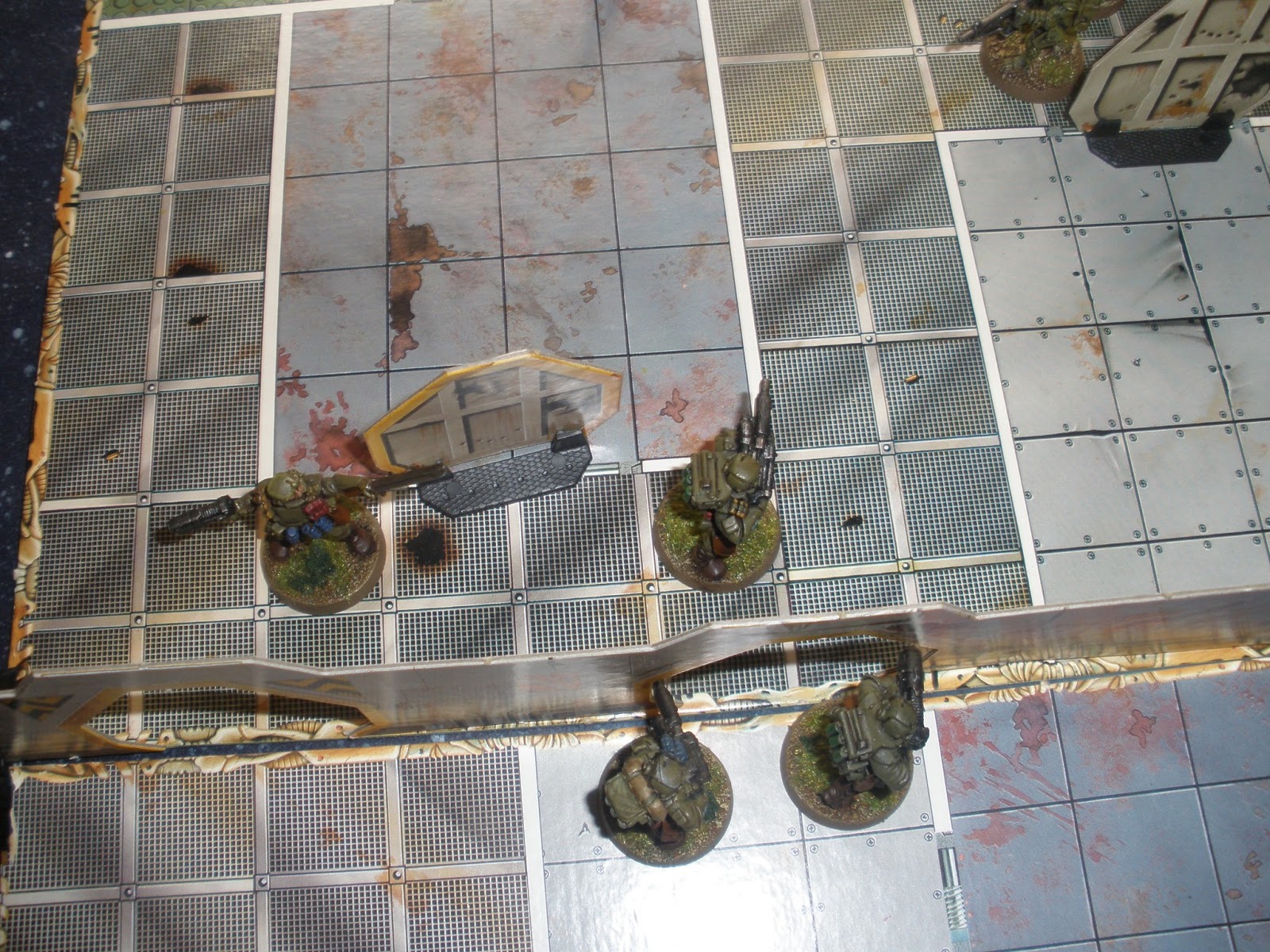 Legault is more cautious and fails to take advantage of the vulnerable corridor.


The HPS are badly mauled but seem to be on the verge of forming an effective perimeter. But why has the Imperium lured them to an abandoned spaceship and ambushed them with elite special forces? I hope you will join us for Part Two and the thrilling conclusion.

Thanks for stopping by!
Posted by Warlord Paul at 06:00